At the end of May, the symphonic British neo-proggers IQ were scheduled to visit the Netherlands and France in the context of their Resistance Tour 2020. We now know what happened: both shows had to be cancelled due to the ever-spreading corona virus.

Obviously, the band was very disappointed that both gigs had to be pulled, although through reasons beyond their control. IQ had never experienced this and it didn’t feel right, especially knowing that so many people had made arrangements for travel and accommodation.

Meanwhile, some artists were making lockdown videos at home, a great idea but not quite workable with the extensive IQ setup. By coincidence, the band had just played two gigs in Germany in January, the first of which, in Aschaffenburg, was filmed and recorded, initially only for the IQ archives. However, the video footage was not quite what they had hoped for in terms of quality, so the footage seemed doomed to disappear. While there were no real plans to do anything with the material, the impending lockdown event gave them different ideas: maybe this could take the place of the two cancelled concerts? The setlist for the Aschaffenburg show was almost identical to the one that would be played that particular weekend, and since it was the full two-hour and fifteen-minute show, it seemed more than appropriate to use the footage for this purpose. No sooner said than done.

The live stream took place on 22nd May and would also be available the following week to ensure everyone had the chance to see the show. As a true IQ fan, you don’t think twice. Hence, armed with a laptop, a HDMI cable to connect to the TV (no smart TV yet), a drink at hand and sitting on a comfortable sofa, I was ready to watch the band in a completely different way. Not packed as sardines, as so often the case at the band’s completely sold out traditional Christmas concerts, but in the comfortable surroundings of my own living room. And, although incomparable, not an altogether unpleasant experience. Above all, it was an opportunity to review the band’s new material in a live setting, because five years after their last successful studio album The Road of Bones, successor Resistance arrived at the end of 2019, again gaining predominantly positive reviews. Not surprisingly, the new album supplied the majority of the songs, five to be precise, while The Road of Bones was represented with three songs. Fortunately, there were also sufficient songs from the old(er) work to view/listen to. I sit myself in a prominent position in front of the telly.

The scene is Colos-Saal in Aschaffenburg, near Frankfurt. The theatre is sold out with 500 people, an enthusiastic audience with many fans. Alampandria, from just released Resistance, is the short opener, immediately followed by personal favourite Sacred Sound, in a dazzling performance. Shallow Bay, also from the new album, tends towards Marillion, after which the ominous tones of From the Outside In appear, the stage is bathed in red light. Stay Down is yet another new song, a moody piano intro by Neil Durant, accompanied by projections of falling crystals on the video screens.

The entire band is dressed in moody black, except for Mike Holmes in his white doctor’s coat, perhaps a link to his NHS past. As it appears, the hall has a relatively low ceiling. As a result, the three video screens are positioned low, which sometimes has a dazzling effect. On the other hand, as ever, the images further enhance the experience.

The Last Human Gateway sets the tone for the rest of the performance: over twenty minutes of superb prog from 1983 debut album Tales from the Lush Attic, brilliant! Only keyboardist Durant was not part of the original line-up on this album, the other four were all involved in its creation at the time, so it was quite special. The characteristic Frequency has a leading role for guitarist Mike Holmes while For Another Lifetime, the fourth song of the new album, starts off with an organ intro, but soon this excellent song, about fifteen minutes long, develops into the well-known IQ sound. The Road of Bones‘ title song can hardly be missed during an IQ gig. What follows is a strong rendition of said track, which also applies to newcomer A Missile.

Another 15 minute epic, this time Further Away from 1993’s Ever, including a beautiful mid-section acoustic moment. After exactly two hours of playing, the band briefly leaves the stage to quickly return for two encores. First is Ten Million Demons, singer Peter Nicholls receiving a red heart from the audience, iconic Subterranea follows suit. Then it’s finally all over, after two hours and fifteen minutes of intense music.

The video images are mediocre: many shots from the back of the hall, over the heads of the audience, the musicians’ faces are barely distinguishable. There is simply not enough light for good images, I fully understand why they have rejected this material for official DVD/Blu-ray release. The sound, however, is brilliant, and the mix is ​​excellent. A solid show, this time without Christmas decorations and huge angel wings, just a professional performance by the neo proggers, who happen to  be in truly formidable shape.

And above all, a sympathetic gesture from the Brits: streaming a recent show, thereby setting an excellent example to follow – kudos! Next year a big party will take place: IQ 40 will undoubtedly be celebrated in style, assuming that “normal” conditions will apply. A pleasant prospect for many fans who have secured tickets for the continuation of the tour in Poland, Spain, England, Holland and back again to Afschaffenburg. Finally, our heroes have some sincere advice on their website, please take it to heart:

PS: After the incredible reaction to the recent live stream, the band has decided to make it available in a limited edition double CD format entitled Show of Resistance as part of the Archive Collection series. The double CD includes all 2 hours and 15 minutes of music from the video and comes in a 6-panel digi-file with a 4 page booklet and introduction text by Peter Nicholls. 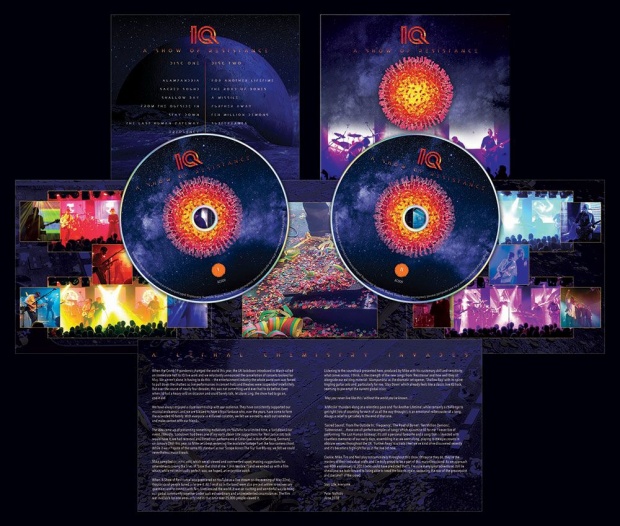 SET LIST
Alampandria
Sacred Sound
Shallow Bay
From The Outside In
Stay Down
The Last Human Gateway
Frequency
For Another Lifetime
The Road of Bones
A Missile
Further Away
~ Encore:
Ten Million Demons
Subterranea