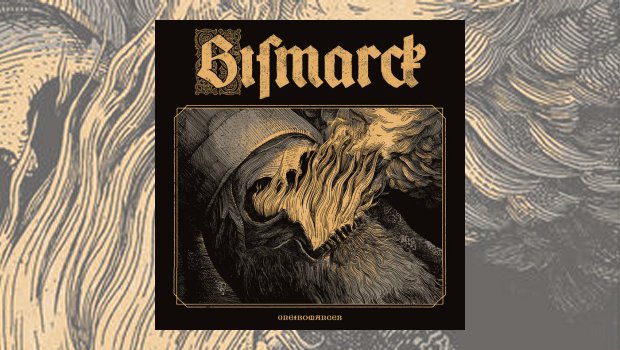 I’d never heard of Norwegian band Bismarck before. I wasn’t entirely sure what to expect, and was even a little wary based on the cover art. Truth be told, if Oneiromancer were not released on Apollon, I might not have given this album a chance at all. And that would have been a shame, because Oneiromancer sounds nothing at all like what I expected. I guess I was thinking Bismarck might be Norwegian black metal, as that is what the cover art looked like to me – and there is a certain amount of that sound in the mix, but there is also doom, drone, psychedelic, sludge, ambient and Middle Eastern folk.

The opening track, Tahaghghogh Resalat, threw me off guard immediately, and also enthralled me. Honestly, the combination of drone, chime and chant is amazing! And the percussion is mesmerisingly awesome. The drumming is hypnotising throughout the album, but really drives this opening track forward. This is a heavy trip, and a psychedelic delight. Four minutes pass by in what seem like seconds. I could easily listen to this at twice or even thrice the length. But just as I’m getting comfortable, the title track crashes in, unrelentingly. It’s such a grand entrance, so massively does it contrast with the mesmerising drone and rhythm of the opening track.

Over its nine minute length, Oneiromancer provides quite different atmospheres. While it begins in an impressively and oppressively heavy manner – all blast beats and harsh vocals – the music becomes more expansive, with some psychedelic sounds taking away much of the bleakness and heaviness, before almost everything falls away. The vocals become clean and subdued, accompanied almost only by some light drumming, with other instrumentation providing subtle accents. Even this, too, disappears, and there is near silence – before a tentative rhythm begins again, and then the crushing heaviness returns. There is so much going on in this song, and although it’s not my favourite, I suspect it will be for many (perhaps most) listeners.

The Seer carries on the rather delicious marriage of heavy and trippy that Oneiromancer introduced us to. It’s perhaps more straightforward, sticking to a mid-tempo stoner groove, and full of thick fuzzy sludge. I guess it’s rather less spectacular compared to the track it follows, and yet for reasons I can’t fathom, I prefer it. I actually really, really, really like this song! It’s aggressively groovy, and I love the way the riffs slow as the song progresses, until an eerie but absolutely gorgeous keening melody fights with then breaks through the morass, and floats above it. Quite possibly my favourite moment from the entire album.

Hara changes the pace once more, all dissonant and melancholy. The vocals are cleanish, but caught somewhere between a whisper and a retch, that gives them a pained desperation, which is strangely attractive. Eventually those massive mid-tempo riffs kick in, and the song oscillates between heavier and lighter sections, with some lovely Middle Eastern folk passages fitting in (and far more naturally than one might ever expect). You can hear the Middle Eastern influences throughout the album, but this is the most overt they’ve been since the opening number. I love how well they’ve integrated the sounds, without ever sounding like they’ve forced them in, or used them for effect.

Khthon is beautifully psychedelic, reminding me quite a bit of Suns of the Tundra, with some almost ethereal vocals, until, of course, the extreme elements take hold. Yet, as heavy as this track gets (and it does get heavy), it remains incredibly atmospheric. Before you know it, the song is over – and so is the album. Oneiromancer clocks in at just over 30 minutes, and that’s probably as long as it needs to be. Bismarck could have easily stretched out some of the songs, but it says a lot about the band that they knew they didn’t need to. Everything about this album feels just right. The production is excellent, too, with everything very clear in the mix, and having its own space. In fact, space is a big part of the mix, as it’s “wide” enough for every instrument to have full impact.

Put aside your expectations and your prejudices, and give this beast a listen. You may well be surprised! I am fully expecting to see this album turn up on several people’s end of year list.