It’s been a good year for Norwegian record label Apollon. I’ve already enjoyed some wonderful and wonderfully varied releases from the label, including Aadal, The Thank Yous, Bismarck, Weserbergland, The Opium Cartel, Kryptograf, and Professor Tip Top. Now it’s the turn of Simen Lyngroth, who I’d not heard of, but who has recently released his second album, Looking for the Spark like It’s Just Around the Corner – and it’s a beauty!

Lyngroth describes his music as Nordic indie-pop, but it’s so much more than that. The Thank Yous are indie pop (and very good at it, too!), but it’s almost disingenuous to call Lyngroth’s music indie pop, or perhaps it is merely that Scandinavians expect more from their pop music than what British and American audiences do? Simen Lyngroth, like so many of his Scandinavian compatriots, seems to take the traditional tropes of the often simpler Western pop and rock scenes, and then return them to us with added intrigue, originality and complexity.

I like plenty of pop music, and always have (I’m definitely no snob in this regard), but to deliver pop this interesting and captivating is a skill. Indeed, this is something I discussed with Julia Marcell, after her own prog pop album, Skull Echo, was released earlier this year. In her own words, “contrary to popular belief, pop music is incredibly difficult to make and it has to do with energy. A pop song needs a spark. Just like ideas, hooks have a mind of their own, you can’t pull them out of a hat and good pop songs are somewhat magical beings because of that.” The character within the story of Looking for the Spark… (for it is a concept album) may not have found the spark, but Lyngroth sure has.

I’m reminded a lot of fellow Norwegian artists Pil & Bue, who also make quite glorious pop music that is so much more than what is generally expected from that genre (albeit not quite so gentle as Lyngroth’s). Pil & Bue cite bands such as Placebo, Muse, Anathema and The Pineapple Thief as being influences and inspirations, and it wouldn’t surprise me at all to find Simen Lyngroth has a similar appreciation for those artists, because I hear similarities to all four of those bands. Just to add to the comparison, Lyngroth has similar qualities to his vocals as Pil & Bue vocalist Petter Carlsen. Lyngroth describes his vocals, somewhat self-deprecatingly, as ‘fragile’. I’m not sure this is at all the right adjective. If there is fragility, it’s powerfully so – perhaps a little like Jeremy Enigk, though not necessarily sounding like him. (And even if Lyngroth doesn’t sound like Enigk, I’m definitely reminded of Sunny Day Real Estate at times, musically.)

What I really like about this release is the almost paradoxical manner that the songs are both ambitious, yet intimate. Kristoffer Lo’s production is superb, especially in regard to the vocals, which are the star of the show. Whether Lyngroth is barely accompanied, or is surrounded by washes of synths and soundscapes, his vocals hover and float over the top. There’s a great romanticism in the songs, at times almost to the point where someone might accuse them of being melodramatic in their melancholy. Alternatively, if not melodramatic, the album is magical – with an almost fairytale quality to it. And, again, that magic is largely down to Lyngroth’s beautiful and emotive vocals.

One thing I’m struck for, and I may well be imposing my own meaning upon the story Lyngroth tells, is how similar the idea is to so many other albums I’ve listened to and reviewed this year, which dwell on the idea of samsara. Most recently, I reviewed Outside In’s Karmatrain, which parallels Herman Hesse’s Siddhartha with episodes in the life of Outside In’s Michael Brown. Looking for the Spark… seems to have that same sense of being trapped in the future, always searching for the answer, without realising it is where we are, rather than where we are going. The only way to break the cycle of samsara is to cease the wandering, and start appreciating what we have.

As with all concept albums, Looking for the Spark… is best listened to from beginning to end. This is not something pop audiences are renowned for, but Lyngroth has made it easier for restless listeners by presenting what is perhaps the most concise concept album I’ve ever come across, lasting just over half an hour. My two favourite tracks on the album are the final two, but the payoff comes from listening to the whole story leading to this point. Having now listened to Simen Lyngroth’s debut album also, I can wholeheartedly say that as nice as that album undoubtedly is, Looking for the Spark… leaves it in the dust. Where Simen Lyngroth goes from here is anyone’s guess, but wherever it is is bound to be interesting. At the risk of trapping myself in the future, I can’t wait to hear what’s next. But I’m definitely more than happy to continue to appreciate what I have right here. 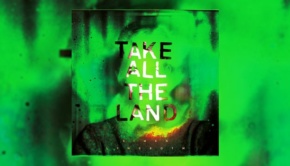 Simen Lyngroth – Take All The Land →