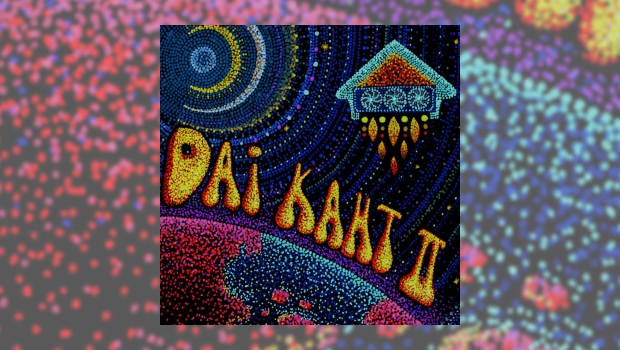 They really should be Welsh, but it turns out that Dai Kaht were born in the Finnish city of Kajaani in 2013. Kajaani is, roughly, bang in the middle of Finland, a mystical land of many lakes, and largely unknown territory to most Westerners. The band formed around a mutual love of Magma, and they have adopted the Zeuhl sound and mythology to the max. As is the way, the band sing the songs in their own made-up language and have given themselves names to fit. The mythology of Dai Kaht also follows a similar path to that of their French heroes, wherein humanity has abandoned Earth to colonise a new planet (Dai Kaht), where, according to the blurb, they are doomed to repeat the same mistakes they made on Earth.

The first album followed the journey of the great spaceship Doover Üouh to the destination planet, and this second album takes up the tale of colonisation. “We explore themes such as naturalism, industrialism, religious manipulation, tribalism and human nature”, says the blurb, and in an imaginary language, who knows, you could be singing about filling in your tax returns for all we know.

Musically, Dai Kaht while displaying the Zeuhl traits of marching rhythms and thunderous space jams, are a more melodic proposition than a lot of bands in that strange musical byway. Dominated by guitars rather than keyboards, the whole is a lot more “rock” than you might expect. Some great guitar explodes out of Willargh, as you might expect from a track seemingly named after the lead plank spanker.

The manic intensity of the start of the near twelve-minute album centrepiece Zöbehr-Daï is Zeuhl in all its bug-eyed glory, the track eventually settling down into an unfolding musical story, before tripping over the inevitable explosive ending. Wehr Mahrü sees the keyboard player take centre stage in raucous fashion, and Mōa Orgata, another twelve-minute mini-epic, maybe has some Finnish folk influence, starting off like an altered state hoedown.

With its full instrumentation, there is always something to grab the attention, and while I admit that the first couple of listens to the album failed to grab me, it has since slowly filtered in, and now, two weeks into isolation, and the slow descent into something approaching insanity, any bugs in my pod have been convinced of the errors of their ways, as Dai Kaht II speaks to them in a language they understand. We’re all dancing on this mad trip into an operatic jazz-fusion-prog mash-up.

It’s time for the pink pill, so if you don’t mind, I’ll just gibber quietly to myself in the corner. Keep safe, and wash your hands!