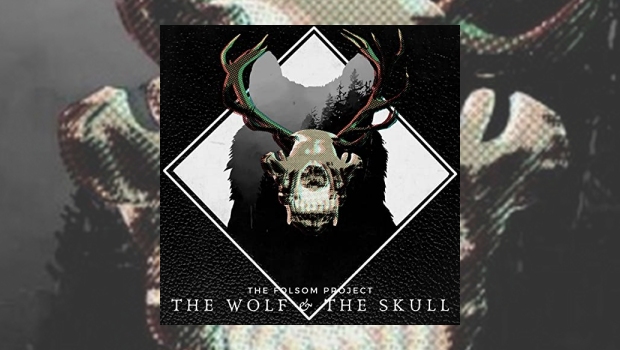 The Folsom Project – The Wolf And The Skull

I don’t know that I’ve ever struggled as much with a review as I have with The Folsom Project’s debut release, The Wolf and the Skull. I have listened to the album so many times since receiving it for review. I have listened to it with every intention to be paying attention, in order to write about it. Every time, I get lost in the music. I realise we are nowhere near the end of the year yet, and yet this feels like a contender for album of the year for me. The Folsom Project is essentially Romsam Malpica, who has composed, played, programmed and produced everything you hear on The Wolf and the Skull. Well, almost everything, as the piano on the second single from the album, Iceland, came from a collaboration with Sam Maraton.

So what can you expect to hear? Well, the press release states that The Wolf and the Skull is “an audible action thriller” mixing orchestral rock, trap and trip-hop, and while that might sound a little intimidating or even a recipe for disaster, it all comes together remarkably (even, incredibly) well. There’s more trip-hop I don’t like than I do – but when it’s done well, it’s a thing of beauty. Trap? No, I had no idea either, but upon investigation it’s a form of rap. Again, there’s more hip hop I don’t like than I do, but I have never dismissed an entire genre, and never would. I own quite a few hip hop albums (though most are from New Zealand artists, who to me sound noticeably different to the usual suspects from the US). The first single released from the album, Dr. Schmidth, had me hooked, and it’s far from the best track on the The Wolf and the Skull.

Ultimately, this album comes across as more cinematic than almost any other album I’ve seen given that label. The use of cinematic as an adjective has become so overused as to become a cliché – and that’s a shame because it means albums like this that deserve it are left looking for some other way to be described. But stuff that, this sounds like a soundtrack to a film (an action thriller, go figure), and it works brilliantly in that regard. I guess I am a bit of a sucker for soundtrack sounding releases as my favourite run of Ulver albums is that from Themes from William Blake to Blood Inside – and The Wolf and the Skull reminds me of these Ulver “soundtracks” (and even soundtracks, as Lyckantropen Themes and Svidd neger come within that wonderful run of albums). Given that Ulver is Norwegian for wolves, it is quite appropriate, I guess, that The Wolf and the Skull reminds me of them. However, as dark as the album can be, it never sounds quite so cold and bleak as the Scandinavians can.

Perhaps that is because Romsam Malpica is from Mexico and living in the US? Regardless, this is really not an album that sounds like it comes from North America at all. Already, I’ve compared the album to Norwegian band Ulver, and by Malpica’s own admission, trip-hop plays a big part in the sound. Ulver utilised elements of trip-hop in their era of making soundtracks, and it makes a lot of sense as trip-hop usually has a particularly melancholic sound, which fits neatly with the soundscapes Ulver, and now Malpica, created. I’m sure there are famous trip-hop artists from outside Europe, but none come to mind. Trip-hop is almost intrinsically associated with England, and more specifically Bristol. Of the big three, The Folsom Project remind me most of Tricky and Portishead. The former I’m not so much a fan of, and the latter I love. Indeed, Portishead, too, came from a desire to create soundtracks (first for a film they made themselves, and then – like Ulver – as soundtracks to imaginary films).

Musically, the album is awesome. It never really sticks to one style, but the transitions are never jarring and the different styles really help to convey the mood and carry the story. There’s enough going on that were this album to be purely instrumental it would still be impressive, and I know I would still love it (in fact, I’d love to have an instrumental version, and perhaps one day one might be released? Hint, hint!). So, where does that leave the vocals? Well, as the icing on the cake, I guess. I absolutely love Romsam Malpica’s voice, which has a real warmth to it. It’s emotive and engaging, and incredibly easy to listen to. Although saying this may well put some people off, the closest approximation I can make is to compare Malpica’s voice to Dave Matthews (I like Dave Matthews, so this is meant as a compliment). Whether sung or rapped, the vocals are always the perfect accompaniment to both the music and the mood.

My only gripe with the album is that it is over far too quickly. This is not because I like albums to be long just because they can be. Sometimes an album is perfect at 30 minutes, and sometimes it’s perfect at 60 minutes. The 43 minutes of this album would be more than sufficient for most releases – but sometimes it feels some of the shorter tracks could be developed upon a little more. I don’t think I’ve ever listened to the album through only once, I’ve always put it back on to play again. And despite so many repeated listens (and there have been a lot) I’ve not yet come close to being bored. But by the time Chapter 5: Year Zero ends, I’m forever lamenting the short length of such a magnificent piece of work.

I can’t wait for the next instalment, because surely there will be one. With a debut this impressive, there can only be greater things in store for those who choose to follow The Folsom Project…

NB: The Bandcamp link below features The Wolf & The Woods EP and not the The Wolf And The Skull full album: