VASA. Who are VASA? That’s a question I couldn’t have answered until earlier this year. The PR blurb for VASA states that they have an “unrelentingly upbeat and joyful approach to the occasionally tawdry world of post-rock”, and that new album, Heroics, “sees them as riotous and celebratory as ever. Thankfully, despite their maturation, VASA are still the kind of band that consistently reminds us that this whole music lark is meant to be fun, right?” And I can’t argue with that. Heroics is, indeed, fun – a LOT of fun! So much so, that VASA have gone from a band I’d never heard of to one of the bands I’m most looking forward to see playing at this weekend’s Ten Years of Chaos presented by Chaos Theory.

I had a very quick window of opportunity to pop a few questions to VASA drummer Niall MacRae before I see them this weekend, and this is how it went…

VASA are new to me, but appear to have been a going concern since 2015, and possibly earlier than that. I became aware of you only this year after seeing you on the bill for this gig (Chaos Theory), and ArcTangent. Heroics has blown me away. Do you feel you fly under the radar a bit, or am I just really bad at picking up on a good thing? 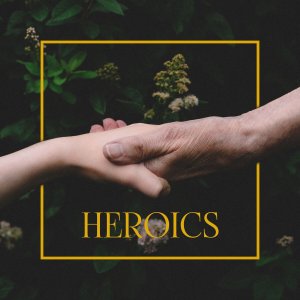 First off, thank you so much for checking out the record! I’m so glad you and many others have taken the time and enjoyed it so much. In terms of flying under the radar, I simultaneously feel shocked that anyone would ever listen to us and frustrated that our music isn’t getting out there far enough. The frustration definitely lies more in the way that grassroots bands have to promote themselves nowadays though. For example, you put up your posts on Facebook and it’s evident that they’re not really going anywhere unless you pump money into it but people are still coming to see us, talking about us and writing about us so there’s not much to complain about. Ultimately, it’s humbling to be recognised at all and to see ourselves on these bills is a blessing. I was so proud of what we had when the masters came back for Heroics that I forgot that it was ever supposed to come out. Now that it’s out there and people are listening and enjoying it, even at a sliver of how much we enjoyed making it, is truly overwhelming.

Going only from your Bandcamp page, it’s been some time since your last release. (Heroics is the band’s first release since 2016’s stand-alone double A-side single Burst/Open, which was preceded only by their 2015 debut album Colours.) Obviously I’ve only just learnt about you, so I’m presuming that you’ve not been absent entirely from the music scene. Or maybe you have?

Before this tour we hadn’t been out for about 18 months to focus ourselves fully on the album — in total it was about 3 years of work pulling it all together. So yeah, absent is about right! During that time we’ve all been very much dedicated to this one project, but Blaine (Thompson) has indulged in soundtracking independent short films every so often, I’ve considered putting some of my 8-bit bedroom doom out there, and John (Niblock) occasionally practices with a few friends of ours on an untitled project. I don’t think I can say much more than that for now though!

How much do you care about genre? Obviously you’ve various genres tagged on your Bandcamp page, but you seem to incorporate a lot of styles, without really belonging to any. From my point of view that’s a good thing, as a lot of the genres you have tagged (e.g. Post Rock and Math Rock) can be horrifically formulaic and derivative. (The good bands within the scene are, of course, great – but there’s a lot out there that doesn’t do much for me.)

For us it’s always been about writing what we want to hear and genre is never really part of the discussion. It is a privilege to be part of the post-rock and math-rock community though, as a lot of our influences do come from there. It’s hard to talk about because these particular genres span so many others and the fan base becomes so varied, hence our sporadic tagging on Bandcamp, but it is a beautiful thing to see fans of jazz, metal, prog, punk, dance and whatever else come together to just enjoy music. 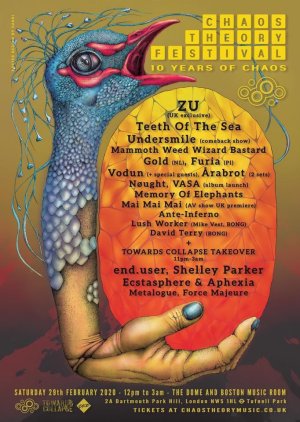 Which is, of course, what is going to happen this weekend! Who are you most looking forward to seeing at Ten Years of Chaos?

Unfortunately we can’t hang around for too long (Scotland is a trek!) but our pals in Memory of Elephants will be playing the same stage as us and they are crushing. We had the pleasure of spending some time with their guitarist Toby this past week and it’s just made me more excited to see this set they’ve got prepared for everyone.

Who do you think will be most looking forward to seeing you?

I’m going to go ahead with the easy answer and say that Kunal (Singhal – Chaos Theory founder) will probably be most looking forward to seeing us! I don’t think I’ve met anyone with a more eclectic love of music. It really comes through in this line-up he’s put together and it’s been a real pleasure to be asked to come along for the ride.

There are actually far more bands on the bill I’m unfamiliar with than those I am. In fact, I know (and very much like) only Zu, Teeth of the Sea, Mammoth Weed Wizard Biscuit, Vodun and yourselves. Given that, who would you recommend I particularly look out for?

If you’re a fan of us then Memory of Elephants are a band that you should definitely look out for and we’re right next to each other on the same stage so you won’t even have to move a muscle!

VASA appear at Ten Years of Chaos Theory which is happening on 29th February 2020 at the Boston Music Room and The Dome in Tufnell Park, London.