After the release of their Fireworker album in 2020 and the new Fireworking live album, Norwegian band Gazpacho are back on tour again, co-headlining with Pure Reason Revolution, culminating in a date at EartH in London. Ahead of the London show, TPA’s Rosamund Tomlins spoke to Gazpacho keyboardist Thomas Andersen about the new album and touring after a pandemic… 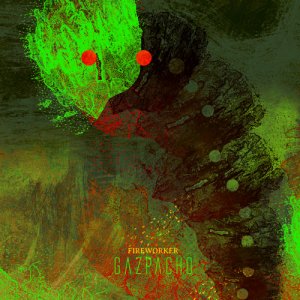 What might we expect from you onstage with your current tour? Which album’s tracks might we hear, if you’re happy to say (some might want to keep an element of surprise)? Is the repertoire mainly concentrating on the Fireworking at St. Croix and Fireworker albums?

We have decided to create a mix of tracks from all the Gazpacho albums (except some of the very early ones) in order to have a little bit of everything for the fans who have waited patiently for so long to see us. Also, as we share the stage with the great Pure Reason Revolution we consciously avoided some of the really long ones as our set is only an hour and a half. But, we do tracks like I’ve Been Walking, part 2 from Demon and Upside Down from Night, so some of the longer classics are accounted for.

How has the tour panned out so far, with two very different bands performing on the shared bill?

It has worked out beautifully! The combination of both bands seems to have the effect of making a varied and fun show for the audience with a little bit of everything to please all musical palates, from loud rockers to the atmospherics of some of our most introverted stuff, and people seem to be enjoying themselves as much as us.

How have the three founders of the band – yourself, Jan Henrik Ohme, and Jon-Arne Vilbo – experienced the entire progression of the band? Are you a six piece currently? Has the music/musical style altered at all with each personnel change and additional album? If so, how?

We are a six piece at the moment. The few changes in personnel that we have had over the years never really changed anything about the sound or philosophy of the band. We always wanted to make music that was different and that only could have been written by us, which was probably a response to Jan Henrik and myself working in the record industry at the time and seeing how all the demos they received sounded like copies of other bands popular at the time. The albums have evolved naturally over time as we dared to go further in exploring our sound and the question of what a recorded piece of music is for and why anyone would want to keep making more of them as the market is saturated to an extent now where it would be impossible to listen to even a fraction of the total output of one day in a lifetime. This emboldened us in experimenting with the genre while still trying to not be boring.

Would you say you write ‘concept’ albums or are the songs put together with a unifying theme created for them? Can you categorise even partially what you what you write about?

We tend to end up with concept albums and they develop naturally as the ideas condense into their final form. We always start by making the music with no words and only add the lyrics at the end during the final stages. Sometimes there is a unifying theme and sometimes there is a unifying feeling. Gazpacho write about philosophical themes and is very heavily influenced by the emergence of consciousness that plagues and blesses humans, and the understanding of what being a smart animal is all about. On Night we wrote about where reality starts and the dream stops. On Molok we did something on the implications of the co-existence of hard science and the soul, and on the latest studio album Fireworker we did a thing on free will verses instinct. That kind of stuff is basically what we like to dream up songs about. 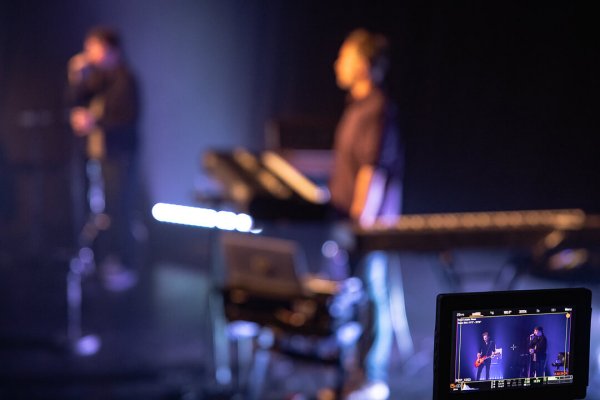 Do you write about tangible experiences, actual or fantasy – if so, are they most commonly your own or from the impressions you’ve gained from others? Or are the songs, and more importantly the lyrics, more abstract than descriptive? Is it mainly politics, historical, or philosophical ideas, or something else that inspires you?

Sometimes real tangible experiences. Sometimes fantasy. The lyrics are almost always abstract as they have to contain emotion when coupled with the music. To work for the listener, which is a goal, they have to be ‘loose’ enough to fit the individual story of whoever is listening. It would be crazy and somewhat narcissistic to expect anyone to be interested in our personal lives and how our divorces felt or whatever. Historical and philosophical ideas are a huge inspiration. Politics, not at all. Personally, I think it is strange to see artists push a political message. Why would an artist’s view on politics be more important or valuable than a plumber’s or a stripper’s? We always consciously avoided making any statements on anything of a political nature, and I think with good reason. One look at politicians these days confirm that it is an ugly business and the dumbing down of complicated issues is not doing anyone any favours and might turn out to be infinitely dangerous for us all.

What types of music were you exposed to growing up and how have your tastes expanded and with which artists over the years?

Jon and I discovered Ultravox around 14 and were instantly hooked. After that we moved on to Kate Bush with the genius Hounds of Love album and finally found and clicked with Marillion. Through the Marillion lens we learned to appreciate the old prog bands like Yes, Jethro Tull, and Genesis. Now with kids growing up we are all exposed to modern music and I am a huge fan of Labrinth, Kate Tempest, Susanne Sundfør (who lives just down the road from me) and similar. Also Bulgarian folk music is a secret love kept for the solitary nights by the fire in our summer cottage. Preferably while smoking a pipe and drinking something that has been under the influence of the yeasts and sugars.

At roughly what age did the inspirational and yearning “wow” factor kick in as you were listening to music that resulted in you knowing that it was definitely music you wanted to pursue further?

Kate Bush’s Hounds of Love and Marillion’s Clutching At Straws. Both albums around the time we were 14/15-ish. Hounds… as it was weird, wonderful and romantic in a creepy way, and Clutching… because of its neurotic power, also with large helpings of romance.

Which bands, if any, do you feel influenced you, whether by the music itself or with the approach to music writing/operating as a band? Did you take formal musical training or are you self-taught?

Some of us are formally trained and some are self-taught. I would say Marillion is the greatest inspiration in how we operate but I would like to say the we really have consciously tried to create our own path.

How do you keep the musical ideas flowing individually and among the band?

How is it possible not to be inspired in this rich world? So many weird and wonderful things of utter beauty going on all around us. I think with the infinite possibilities in music and the voice Gazpacho has found we will run out of time before we run out of ideas.

The songs’ vocal lines have a huge range which could be daunting for some singers, clearly not for Jan-Henrik Ohme; do the vocal melodies get written by him, or with his voice in mind, or do you all experiment in rehearsal with ideas, including the key, to try to suit everyone?

He has an incredible range and makes all his own vocal lines. Something he is very good at and that we never touch. As he comes in to very elaborate demos we never change the key to suit him. Back in the day we sometimes tried to put some high notes or whatever in the songs to show him off but I haven’t even thought about his range for years. He has spoiled us! 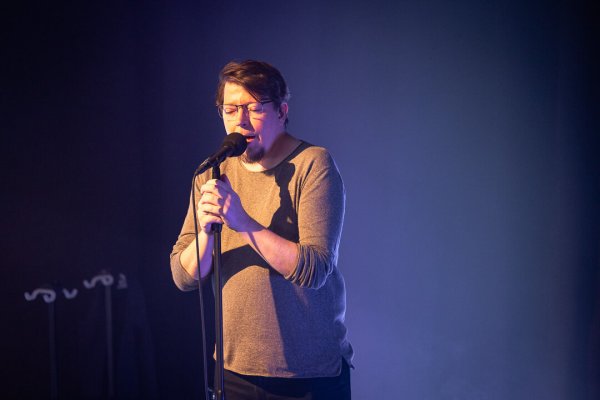 The Fireworking at St.Croix album emerged from the strange and enforced potentially inactive times of the early COVID-19 pandemic period. How easy or difficult did you find trying to work as ‘normally’ as possible during this time? How are you feeling about going out on the road when the health situation is still far from normal?

Like the rest of the world we have to just move on, accept that there may be a heightened risk and hope for the best. We all work from home with relative ease so personally I found the COVID period relaxing and one with hope that we might take this opportunity to make the world better after the enforced pause. Focus on the environment and such. That all went to hell now of course.

Have you found that you can relate some of the themes of Fireworker to the COVID-19 pandemic?

Only at the deepest level where COVID-19 is a beautiful example of evolution evolutioning 🙂 and how whatever survives survives with no regard to beauty or utility. There is no goal, just a process that we have to infuse with whatever meaning we can come up with.

How far do you consider that this album may be an example of a piece that perhaps had a near prophetic aspect to it with regard to our current times? I’m not just thinking about the pandemic but other social issues where history appears to be repeating itself on a seemingly inevitable ‘hamster wheel’; one where humankind is failing to learn by previous example, and ignoring what’s ultimately staring it in the face?

I don’t think it added anything new so I claim no prophetic aspect, but it may serve as a reminder that behind the wine tastings and the symphonies we’re still a very dangerous and easily angered ape. Controlled by the ultimate survivor instinct and running on a dated operating system that is totally unfit for the technological levels we have reached.

What’s next for the band? Is there any more material written for a new album for sometime in the future, while the Fire albums take root?

We’re working on a new one that should, if the Gods allow, be done by the autumn of this year.

Where does the current tour take you, and when might you be back in London?

This tour we have played shows in Germany and right now I write this on the bus from Breda to Zwolle in the Netherlands. We will also pop by Paris where we play what appears to be a floating stage on the Seine before ending the tour in London. We will be doing some shows early next year but nothing has been finalised yet.

You took part in Cruise To The Edge in 2019. How was that experience, playing and staying on a cruise ship? How did it compare with regular gigs, and touring, in terms of your relationship with your audience, for you personally and for the band as a whole, in general?

The Cruise was fun, especially for my daughter who was 12 at the time and for whom the existence of a buffet where you could serve yourself all the ice cream you wanted was a sign that there is still hope on this earth. We all had a good time and playing on a boat was a blast. Also hanging with other like-minded folks meant a lot of interesting conversations and fun. Much recommended to anyone considering playing or attending. 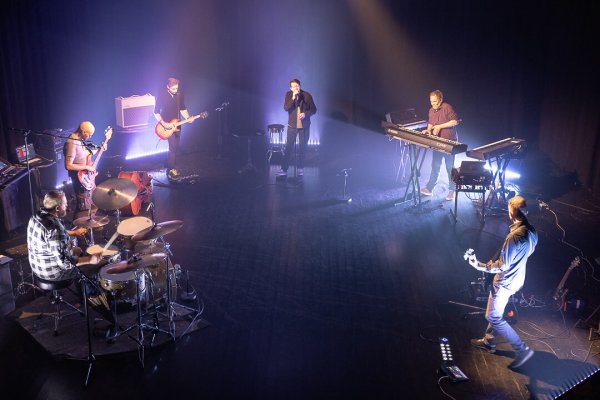