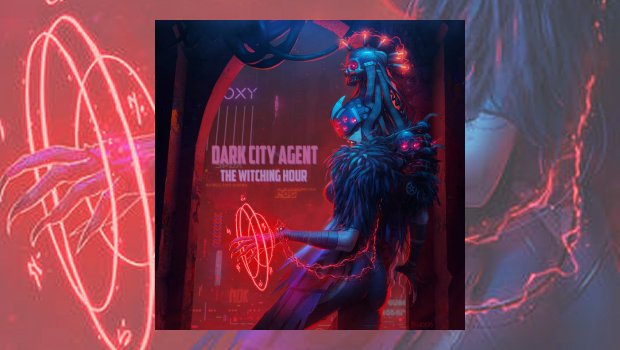 Described as a “classic rock and roll configuration augmented by modern electronic music production”, Dark City Agent is the brainchild of Robbie DelPrete who puts the rock in alongside two chums rolling the roll on bass and drums, with contributions from all on the voltage-controlled oscillators (synths) and samples on this mostly instrumental piece.

The album title and first track is The Witching Hour and instantly it could be the soundtrack to a sci-fi whatever where a gang of well-meaning reprobates team up to save the planet from hybrid machines who make quirky noises before heading to the Rainbow in the Dark (track 3), citation required as apparently inter-dimensional spies are involved somewhere…

This will be recognised as the actual Ronnie James Dio song but with, bizarrely, what appears to be a pissed up R2D2 trying to gate-crash the party (“beeep, tweeb – I’ve brought my own can of oil, etc. – hic”). Maybe not the best manoeuvre as central intelligence advises you to listen to the genuine file as stored on the Holy Diver hard drive.

High Security Clearance and The Fallen City has single synth notes attempting to configure the bank’s key card entry whilst Jules Jenssen’s drums give it a good kicking. Guitars crunch and the bass parallels the riff throughout.

There’s an image of a teenager’s sticky, window unopened room ten hours into the video game with that relentless heavy soundtrack about much of this recording, this is further noted as Le Roux the Mastermind progs in and takes away the earned privileges. In fact, this is a pretty good track and the most keyboard-y thus far, may be recommended if you’re a fan of the unruly haired Jean Michel Jarre.

Rocket Fingers (She Needs His) has a Vocoder sound that maybe depicts a robot offering his “digits” to the lucky lady? The guitar sways are interrupted by sweezy synth bits that hint at Hawkwind in the Silver Machine vein, not bad but the lack of vocals does seem that the binary code is somewhat repetitive…

However, actual playing on this genre is not to be sneezed at or asking for its RAM to be purged. Here’s a well-meaning project that should be supported for the work involved at least. By the final point scoring, back to the shuttle-craft, and then sex with the green alien track and home base Blood Moon, the Dark City Agent has definitely redeemed himself with the longest track on this album with images of dodging the asteroids and the debriefing of a successful mission and in many ways the album too.