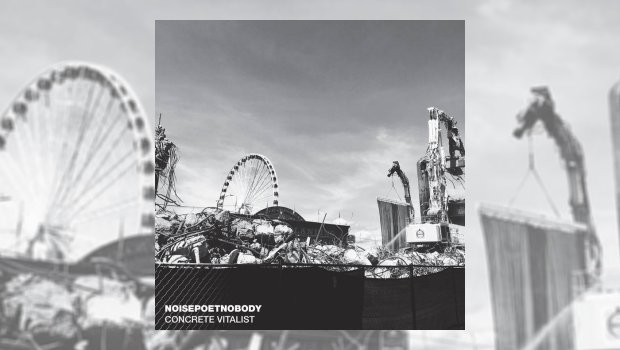 When the opportunity came to review Concrete Vitalist, I had to review it. I didn’t know why, but I felt compelled.
It turns out that, some time ago, while I was dabbling with making some ambient music, I’d been listening to Noisepoetnobody (AKA Casey Jones from Seattle) on Soundcloud, but having a brain like Swiss cheese…

“The album was inspired by concepts of musique concrète, sonic construction and modern portable recording. A plethora of bus transfers and miles walked into public and remote recording locations over a year’s time are represented.”

Music is defined as “vocal or instrumental sounds (or both) combined in such a way as to produce beauty of form, harmony, and expression of emotion”. Are all these elements present?

Arguably, no. But music is in the ear of the beholder. You can hear music in the rhythmic breathing of a sleeping loved one, or the footfall on a dark street on the way back from the pub.

Whilst one word that springs to mind is “ambient”, another is “experiment”. One might be tempted to associate ambient music with music to which you might relax, do yoga, chill, accompanied by whale and bird song (though probably not in the same track). There is also a darker side. In these instances, Ambient music sometimes borders or overlaps experimental sound design.

It is, therefore, sometimes a blurred distinction. Perhaps this is why sound design is a big thing in certain types of video game. There are some games where you spend time hiding in cupboards from monsters and the sound design is an intrinsic component to that… ambience. It frames your imagination, whether you’re the prey to some kind of predator made of pixels or imagining dancing below the waves with a Humpback while you’re chilling in the dark on a beanbag.

To my mind, this experimental music thrives on one person’s audience participation. Your imagination is a vital instrument that you must employ to derive any kind of reward from such music. Concrete Vitalis shows this perfectly.

Case in point: In Part 2, seemingly arrhythmic pulsing and throbbing mechanical noise forms the backdrop to the sound of a bowed instrument. Much like the band who played on while the Titanic sank, I imagined a lone woman, playing a two-stringed Erhu while all around her the burning village is decimated by a helicopter gunship. On the other hand, sometimes the images are too faint to name, but there’s a menace to this intangible collection of noises from machines and modular synthesisers, marshalled together to make something that is unconventional but truly interesting.