This combination of the two volumes of The Road box, both originally released to commemorate the 40th anniversary of Henry Cow in 2008, comes ten years later (sort of… ) as a 50th anniversary celebration of the band, and as a tempting carrot to those of us who did not indulge the first time round, and have been searching in vain for those long-deleted boxes at a reasonable price for years now. Also included here are all the studio albums, and Henry Cow: A Cabinet Of Curiosities, which was only available to subscribers to the original box, rather than subsequent purchasers. Confused? If not, prepare to be bamboozled as the Cow messes with your preconceptions of compositional construction and recording techniques over eighteen CDs and one DVD, all for a mere £75. Certainly value for money, and maintaining the original band’s revolutionary socialist principles, at least in part, given the astronomical cost of some of the nostalgia sets currently doing the rounds.

Henry Cow were formed in Cambridge in 1968 by saxophonist and organ player Tim Hodgkinson, and guitarist Fred Frith. The name already existed, and Crimson-like, was hanging around waiting for the right people to come along and tweak its udders. From the very start they were instinctively anti-commercial, a trait that saw them soon exploring avant-garde territories with furrowed-brow intensity, and no little glee. They eventually started the ‘Rock In Opposition’ movement in 1978, a place where similarly ideologically pure (musically or politically) bedfellows met and shared brown rice, revolutionary theories, and conceptual shenanigans, organising tours and gigs across Europe within a framework of impoverished mutual support.

The word iconoclastic might have been created specifically for Henry Cow, and they are not the sort of band to listen to for longer than a couple of hours at a stretch, as the noise they make is not, by any stretch of the imagination, easy listening. What it is, however, is hugely imaginative, often intentionally humorous, more than occasionally terrifying, and always interesting, but it is never, ever repetitive, clichéd or boring.

To quote Tim Hodgkinson from the interview repeated in the booklet, taken from the liner notes of the original Concerts album, it is a contradiction to “play ‘reactionary rubbish’ and say ‘I’m a socialist’ with the lyrics”, and never has a band’s radical thinking been reflected in its radical musical output more than from within the confines of these wilfully contrary noiseniks. Tim’s quote serves to confirm my long-held contention that true creatives in any field of the arts are inclined to have an open mind, open to all manner of outside influences and cultures. This is why these same people are not, in the overwhelming majority of cases, conservative (small or capital “C”) by nature. A musician or any other artist with a reactionary mind is working in a creative cul-de-sac, and that will be reflected in their work.

On to the contents of the box…

Sorting through this curious cabinet in the order the CDs are presented necessitates playing through the studio albums first. These have all been lovingly remastered by Bob Drake, and I have to say, the clarity of the CDs is stunning. While the fan would probably head straight to the hours of extras and live recordings, it is worth pointing out to the uninitiated how varied this band were, and this is never better highlighted than in the progression of their studio canon. Reviewing every album would take up far too much space, so here’s a précis:

An energetic charge through the entire five-year musical history of the band to date, crammed into 40 minutes, which might explain my fellow scribe Phil L’s comment “Canterbury falling down the stairs”! If you like early albums by The Soft Machine and the Mothers, you’ll understand. Oddly charming.

Work gets serious. There is a fierce intent, and a whole side of esoteric studio improvisation, using some highly innovative recording techniques. Spiky.

After a tour with Captain Beefheart, the band is disillusioned with repeating itself night after night, so The Cow split up… after a fashion. Wouldn’t have made for much of a box set if they had called it a day completely at this point!

The Cow team up with a left-field avant pop band by the name of Slapp Happy (Dagmar Krause, Anthony Moore, and Peter Blegvad), and make an album as “Slapp Happy/Henry Cow”. Utterly different, as you might expect. There are songs! Strange wonky songs, illuminated by Peter Blegvad’s lyrics musing on hats, Europe, and illness, to mention but three disparate subjects, taking the listener on a journey wherein he/she attempts to untie the linguistic Gordian Knot of Peter’s wry and labyrinthine wordplay, which is running rings around said audient’s noggin. As John Greaves says in the booklet, it was an “extraordinary meeting of incompatible minds”. Marvellous!

Inevitably the merged group splinters while rehearsing in draconian conditions for this second LP of 1975. Dagmar remains, and her striking tones become a subsequently instantly recognisable feature of the band. Probably their most uncompromising record, it took a good few years for me to “get” this frightening slab of vinyl. It was the first LP of theirs I bought back in the day, and probably not the easiest gateway into the Cow field!

I soon realised that Living in the Heart of the Beast and its Side 2 counterpoint Beautiful as the Moon; Terrible as an Army with Banners are artworks of consummate skill, and probably the apogee of the Cow. “Genius” hardly begins to cover it, and it puts other prog epics, for that’s what they are, oh yes, in their all-enveloping atramentous shade. The rest of the album is mesmerising in its complexity, and the whole thing is a discourse on a fractured and fracturing world. If only they knew what relatively sane times they lived in! In Praise of Learning is indeed frighteningly good.

A precisely constructed swansong for the band, made after a decision to call it a day, and following numerous personnel comings and goings, might explain why it sounds less organic, less free-flowing than its predecessors. Still out on a limb, and as an academic exercise it is quite satisfying, but it lacks something, in my never humble opinion!

Of course, the real draws here are the live recordings and the studio extras. Tracing the development of the band from the Beginnings CD, where a young band finding their feet channel early Soft Machine through their own free-spirited inclinations, to the In Praise of Learning era Hamburg CD, where we find the band at the peak of their improvisational powers, is a fascinating trip.

This from the booklet (one of three in the box, each crammed full of illuminating text) gives you an idea of the burgeoning imaginations in this band:

“In 1976, honouring ‘a tour commitment in Scandinavia as a quartet as (singer) Dagmar was ill… we each prepared materials on tape with different but chronological content’… described as the history of Cow from four different perspectives. ‘Each tape was 2 hours long and ran continuously, silent unless made audible by way of a volume pedal… (the tapes) were always running. Each concert (was) 2 hours of unbroken improvisation in the dark by candlelight’ the players being occasionally accompanied by the tapes, and ‘always starting with a flute and drum and always finishing with a march written by Fred’.”

This fascinating concept is represented most fully in this box by the Trondheim I & II CDs, as well as by extracts on other CDs. Much as I like a good helping of strangeitude, I can only surmise that the rarefied clattering, beeps and lurches of the improvisations on display here made far more sense if you were there. A soundscape that wouldn’t be out of place as the imagined alien noises made at the one atom-gossamer-thin muslin shroud separating two alternate universes, it eventually resolves into a highly Kosmische trip, but it is not something I will be rushing to play again soon, I have to admit.

Much more involving is the Bremen CD. From 1978, New Suite is a dense trip that carves its own path through a dense jungle of contrapuntal rhythms and tightly scripted instrumental derring-do, a thrilling display of quality chamber rock, showing the band at the top of their game. Der Kunst Der Orgel is the 34-minute improvisation that follows, and it is less ethereal, and therefore more involving that the Trondheim trip, but just as challenging. I will definitely be re-visiting this!

It’s not quite all outré weirdness though. Scattered throughout the live offerings are composed and structured pieces, as well as little gems like Little Red Riding Hood Hit The Road – the band played several gigs in the company of Robert Wyatt in the period immediately before the great man gave up live performance – and covers of songs by The Soft Machine, and Phil Ochs, of all people!

The DVD is the 1976 Vevey concert, which has been up on YouTube for some time now, and most fans will know it already.

The booklets are worthy of a review themselves, but space, and your time dictates otherwise, so here are some snippets from the first booklet. I hope it whets your appetite!

Odd facts:
The Cow were a significant part of the backing band at the inaugural performance of Virgin meal ticket and labelmate Mike Oldfield’s Tubular Bells at The Queen Elizabeth Hall in 1973.

The joys of touring:
A warning from the past for bands braving the Continent post-Brexit, and just because “we did it before” doesn’t make it ok, you could say the same about TB epidemics! And, yes, I’m allowed to do politics, this is Henry Cow, after all.

This from a 1977 tour diary:
“Arrive German/French border. Stopped on French side and bus and we searched; stopped on German side and entire truck emptied and itemized at length.”

A band whose life on the road was a hand-to-mouth existence, which is evidenced in the diary extract, chronicling a seven day period in the winter of 1977, including the incident above, during which they travelled by road in somewhat temperamental vehicles from northern Spain to Barcelona, then on to Freiburg in Germany via the fateful crossover into France, then on to Munich, finally ending up in Switzerland for recording and further tour planning meetings! I am exhausted just reading that. This is the final entry on the seventh day:
“Leave (Switzerland). Leave Carnet behind. Go back to get it. Jack leaves masters behind… breakdown… puncture.” Eek! 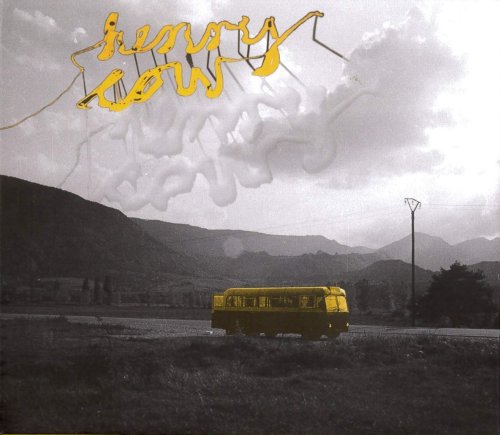