An unfortunate combination of our navigational failings and a signal failure on the Circle Line meant we arrived at this plush central London venue about half-way through Henry Cow’s first number Half The Sky, which we watched on the TV screen in the foyer before we were allowed through to the concert hall to take our seats. A minor blip that was soon forgotten!

As the title of this concert implies, this was a celebration of the musical legacy left by Lindsay Cooper, who sadly passed away last year. The event was organised by Chris Cutler and has been much anticipated by followers of Lindsay’s wilfully uncompromising and heady emotional muse, and of course by fans of Henry Cow, a band that no-one imagined would ever join the legions of 70s reformations. 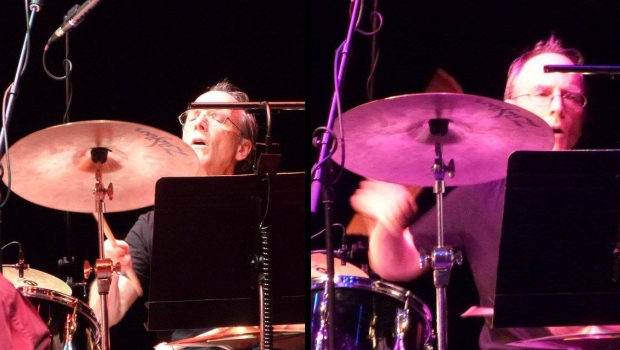 Lindsay joined Henry Cow in 1974, and appeared on all but their first album Legend. Four of the five songs in the opening Henry Cow section of the set are taken from the second side of their last album Western Culture, with the fifth song, the short and strident Slice later appearing as a bonus track on the CD reissue. All are written by Cooper, with Tim Hodgkinson co-writing Half The Sky.

Hodgkinson, on fine form with his energetic alto saxophone blowing in particular, was one of several original members from the prime movers of Rock In Opposition on stage tonight. Chris Cutler, whose deft touch with the complicated and often contrapuntal rhythms was a joy to behold, also acted as musical director, with guitarist Fred Frith taking his cues from his fellow RIO elder statesman. Frith in turn took on the role of “conductor” to the reeds and brass section during the later Music For Films section. This he achieved by some minimal hand movements, nods and eye gestures from his position stage left as we looked, towards the also seated blowers stage right. As if to increase their contact to the music, both Fred Frith and Chris Cutler played barefoot, with Frith making noises with his guitar that at times bore a fleeting resemblance to rock music! Sorry, just my little joke… 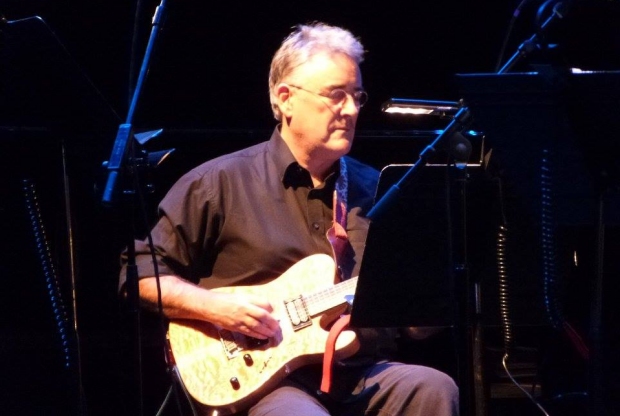 John Greaves gave a sterling performance on his bass guitar throughout the evening, as well as contributing some powerful singing on some numbers, with Frith then taking up the bass duties. John and Chris formed the gravity anchor that kept this incredibly complex music from flying off into the ether. 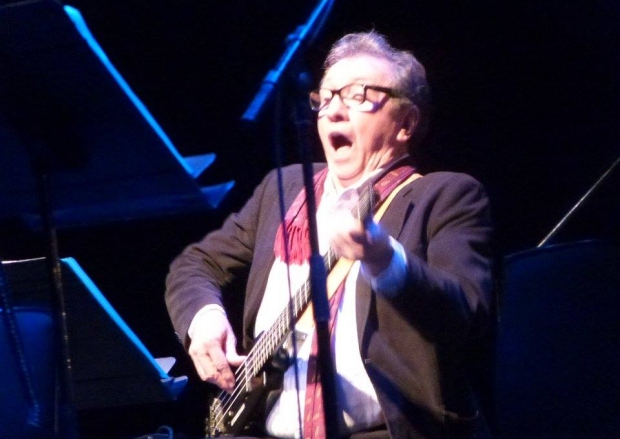 The Henry Cow section in particular was driven along by the sheer vitality of Cooper’s compositions, an energy that made the occasional missed cue and technical glitch forgivable and rather humorous, lending the unavoidable studious air some much needed levity. With rehearsal time for such a large and disparate collective obviously at a premium, the musicians poured much concentration into their scores and it more than made up for an occasional stray note and mistimed entrance. I have come across some criticisms aired at the evident lack of rehearsal, which to my mind are a tad mean spirited and fail to take into account the obvious logistical and economic difficulties involved. Suffice to say that the ensemble got better and better as the night progressed, and by the end of the evening were flying, more of which later.

This evidently serious music was played with an obvious joy that transmitted itself to the audience, proving that you can play and listen to music that requires hard concentration while simultaneously making it a fun experience. This music may be 40 years old but it is still possessed of a true progressive spirit that goes way, way beyond the modern style known as “prog”.

The ensemble, with the exception of the vocalists, and intermittently when the muse grabbed them, one or other of the brass and reeds section remained seated, and there were no between-song introductions. The only person to speak from the stage was an obviously emotional Dagmar Krause, who seemed genuinely surprised that the evening was a sell-out, humbly thanking us all for coming. Some of the audience had travelled from other countries, and some from other continents, which only served to add to the sense of occasion.

Zeena Parkins walking across the stage to take up her position at the harp and Fred Frith leaving his guitar and walking over to sit and observe stage left as we look indicated that we had moved on to News From Babel. This was until now a studio-only project formed some five years after Henry Cow that lasted long enough to record two albums. Robert Wyatt sang on some of those songs on the second album Letters Home and tonight his place was taken by John Greaves and Phil Minton, the latter of whom it has to be said is something of a one-man male voice avant-choir. The passing of time has not diminished his vocal power one jot. His most striking vocal in this section was fittingly enough delivered during a full-on performance of Dragon at the Core, a song for which he took the lead vocal on the original recording. Greaves did a fine job of taking Wyatt’s place on Moss, in a version that opened out the original studio recording like a lone flower in coming into bloom in the midst of a wasteland. Compelling stuff indeed! 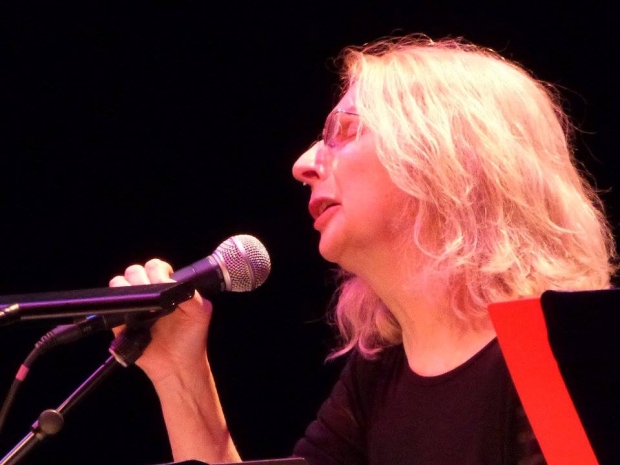 This section also saw the welcome appearance of Dagmar Krause, who contributed her distinctive stentorian tones to the group’s first album, Sirens and Silences/Work Resumed on the Tower, two songs from which were played tonight. Dagmar is a lady whose obvious emotional warmth as detailed above is certainly at odds with her occasionally declamatory singing. 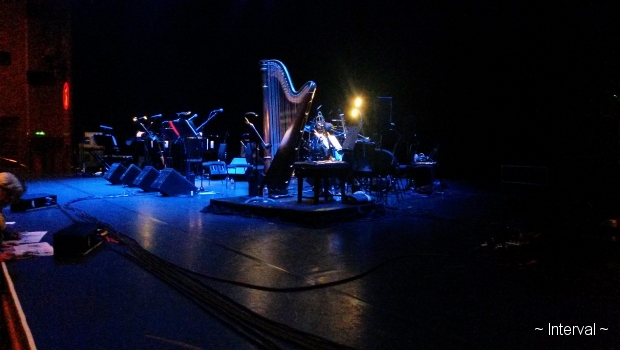 There then followed a twenty minute interval, needed as much by us in the audience as the band, as we drew breath and attempted to assimilate what we had had just heard and seen. This was turning out to be a memorable evening.

Next up was Music For Films; a group formed in 1979 to perform Lindsay’s various pieces originally written with film in mind. Her revolutionary politics are evident from the song titles in this section, with Sally Potter reprising her role as singer for the original group. Possibly the most musically wide-ranging section of the evening, we were treated to everything from 30s cabaret to avant chamber music. Unfortunately, my memory of this part of proceedings has already become a tad cloudy, simply because it was eclipsed by the utterly stunning final section. 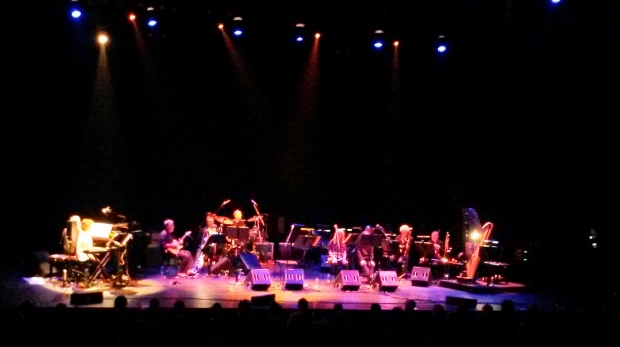 Oh Moscow was a late eighties group formed to perform a song cycle about the Cold War, with lyrics written by Sally Potter. Serendipity must have been in the machine when the Berlin Wall came down just a few weeks after this cycle was performed for the first time! Potter is here joined at the microphones by Phil Minton, the two singers’ diametrically opposed styles complimenting one another perfectly. Minton, with his dramatic flourishes and emotional angst countered by the serious and more straight-ahead style of Potter was a delight. Add into that some wonderful skronking from Alfred Harth, and the by now tight and sweet ensemble playing, and we have a breathtaking performance that will live long in the memory.

Lindsay Cooper was most well known for her bassoon playing, and those parts were played with aplomb tonight by Univers Zero man Michel Berckmans. Another revelation was the violin of Anne-Marie Roelofs, who at one point contributed a truly mesmerising solo. As I have by now mentioned almost everyone, it would be remiss of me not to highlight the important piano and keyboard contributions of Veryan Weston, who at one point looked like he would drown in scores, as a growing paper mountain around his piano stool stood witness.

Lindsay Cooper was a woman of fierce intellectual and warm emotional passion, and given her long battle with multiple sclerosis, an incredibly productive talent. As a female composer in her chosen obscure corner of the music world, she was an outsider even within a group of outsiders. Her music is singular, uncompromising and wilful in the extreme. It is also great fun. RIP Lindsay Cooper.

Thanks to Traverses Fanzine and Stéphane Fougère for kindly allowing us to use their pictures.