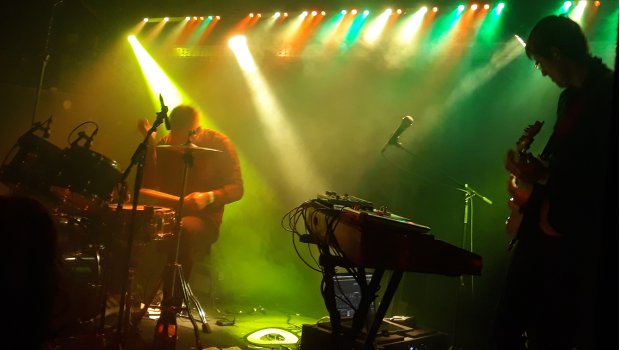 With a couple of days in Bristol pending, I scoured the listings to find some suitable entertainment, my eyes immediately lighting up when coming upon Battles. I’ve liked their bizarre meld of electronics and rhythms for some time but have never seen them before, so this seemed a no brainer.

But fate being what it is, the show at the compact Exchange sold out before I’d snagged a ticket. Facebook to the rescue (it does have its uses!), and I managed to get one on the day (thanks Robin!) so was in.

First up a duo that I had not come upon before, Luo.

The logistics for rehearsals must be a bit tricky with Josh Trinnaman and Barney Sage being residents of Brighton and Bristol respectively, but the results were very impressive. Like Battles, the setup is drums plus electronics/guitars, but this is a much more atmospheric proposition, Barney’s drums central but expanded by the overarching looping and keyboards, accentuated with additional guitar, but nothing you would recognise as soloing.

It’s a dynamic sound, the dextrous and rhythmic drums keeping the focus while subtlety seeps in all around. No doubt Barney is a fine drummer and he seems to revel in his position of driving force at the centre of the stage. From my position tucked in behind the speakers at the right of the stage, Josh is largely hidden, although a craning of the neck now and then keeps me abreast of what’s going on. It’s a pretty full house for the support too, which is nice to see, with much bobbing of heads and grooving to the dancey rhythms, the great snare sound cutting through beautifully. All things considered and given the size of the room, the sound was great for both acts, allowing the depth of the music on offer to shine through.

There were some technical issues that forced a curtailing of a few of the tracks – a likely occurrence no doubt, given the heavy reliance on technology – but it didn’t spoil what turned into a lovely, engaging and inventive set that I thoroughly enjoyed. I’ve since checked out their Bandcamp page and liked what I’ve heard so Luo is certainly a name that I’ll be remembering. 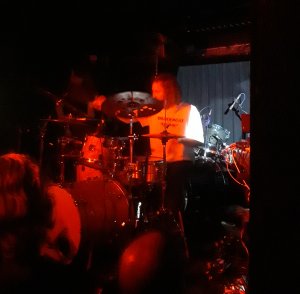 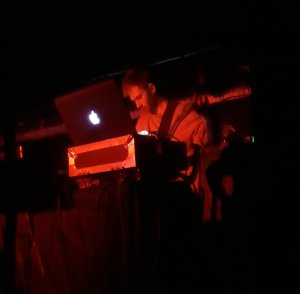 A quick changeover, Ian Williams and John Stanier appearing to work through their setup, a very similar one as John’s drums are pulled forward to where Barney’s now dismantled kit once stood.

The already full room is noticeably more cramped as the duo assume their positions and launch into a set that weighs very heavily on the newly released and brilliantly titled Juice B Crypts album, the first after the slimming down of the band to a duo with the departure of Dave Konopka last year. The sound is, if anything, more barking than it was on earlier releases, underlining the maverick stance that makes Battles such a mouth-watering proposition. So highly do they clearly regard the new album that most of it is played, the other releases only represented by one track each, two from 2015’s La Di Da Di including the Summer Simmer intro to Ice Cream, but this might have more to do with the practicalities, now that there are only two of them, than the quality of the material.

From the off there’s a relaxed good nature, the set bedding in with four new tracks off the bat. There are a couple of technical issues again, but nothing to detract, Ian directing John to reboot the offending electricy doo-dad. The sound is crystal and the beats as clear as bells, getting the youthful crowd gyrating on the back of many a righteous rhythm. It’s fascinating to watch, quirky in the extreme yet eminently groovy, the duo knowing just which buttons to, quite literally, push. 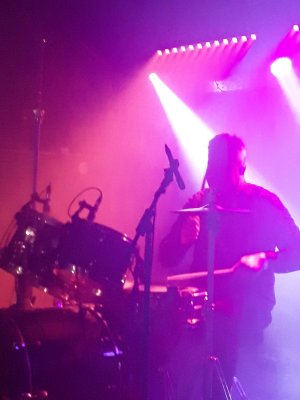 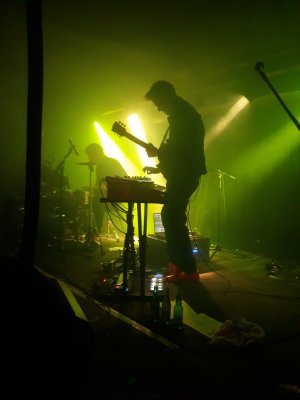 My view was about the same as for Luo, so the focus was largely on John Stanier’s superlative drumming. The ex-Helmet man knows his way around furious tub-thumping and he doesn’t let up for a moment, pounding the tiny kit within an inch of its life, reaching skyward to punish the unfeasibly high cymbal that almost scraped the Exchange’s low ceiling. A dynamic and forceful performance, when he got up at the end his plaid shirt was soaked through, evidence of the vigorous workout, powered by a number of cheeky brewskis, augmented after Ian’s plea for a pint of the cider they’d tried on a previous Bristolian visit; “5%, named after the town where it comes from.” Dutifully, two pints of said beverage are hurried to the stage, leading Ian to muse on whether he could request are any other local produce, noting Cheddar cheese as a potential option.

Ian’s contribution in the reduced line-up is more encompassing, given John’s need to be pounding his skins most of the time, and he skips between keys, buttons, loops and guitars with an easy grace. Guitars don’t sound like guitars, but in their treated form they are an important component.

Biggest cheer of the night arrives with Atlas, a key track from 2007’s debut album, Mirrored, a classic album that helped to shape the future for many. The crowd are loving this, and rightly so as it’s a scintillating demonstration of the possibilities of technology and a desire to do your own thing. No encore, but none needed, they’ve done their job and it would be foolish to do the “let’s walk to the side and stand in plain sight to be called back to do the encore we were going to do anyway” thing. The crowd go nuts, John and Ian salute them and, in John’s case at least, head off for a well-earned breather. 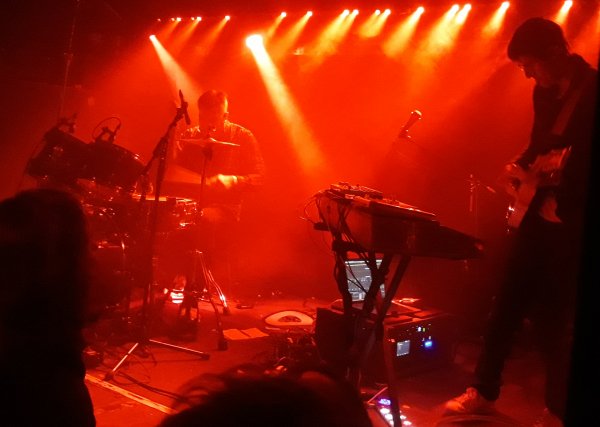 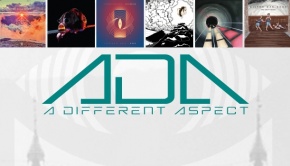 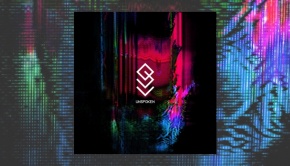