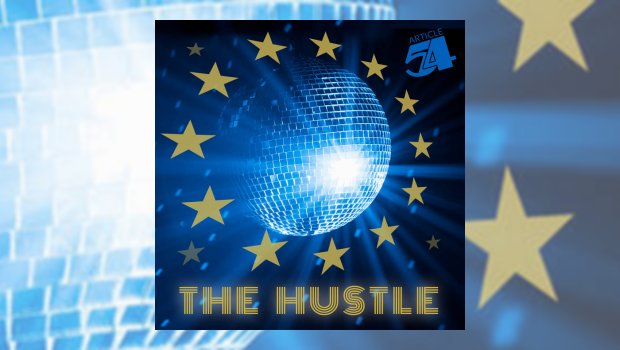 Article 54 – The Hustle [plus interview with Rhodri Marsden]

Dig out the white suit with the wide lapels, and the ass huggin’, flare flappin’ trews, strike your best Travolta pose, point pointedly at the ceiling with one hand, the other resting at a jaunty angle on your hip as the mirrorball dances reflections of light over your pomaded quiff. Why? Because this album is the disco cure you never realised you needed, for the creeping collective insanity you never deserved.

“Who elected the people who run WTO?” asks a disembodied James O’Brien over a louche disco beat during the hip swayin’ choogle of Let’s Go WTO while a world-weary singer intones “Come and join us on skid row, when we go WTO! They’re gonna love us in Moscow, yeah, when we go WTO!”

The Hustle by Article 54, variously described as “a Brexit disco symphony”, “too clever by half”, “the last throes of despair”, “where’s me trahsers?”, and “it was never like this in my day”, and currently outselling Saturday Night Fever, is the brainchild of sometime music writer, and keyboard player about town, one Rhodri Marsden. Some of you may know Rhodri for his sterling work with Scritti Politti, and Prescott, and more recently as the gravitational force that stops Lost Crowns exploding into your lunch. Never knowingly seen sans chapeau, with The Hustle Rhodri has doffed his titfer to sprinkle sure-footed disco magic over all those trite and mundane phrases uttered by our deluded leaders, gurning demagogues, and sundry poltroons, in supplication to the Beezelbub otherwise known as Brexit. These mantras summoning forth the undead, and short-sighted car workers from Sunderland, have since been repeated ad nauseum by mostly despairing, but worryingly occasionally gleeful commentators, some sampled here in all their inglorious basterdry. Rhodri has turned those phrases we’ve all grown to love and cherish over the past three and a half years into stack-heeled disco exhortations of purest angel dust, oh baby, yeah!

Leave your septums in the bathroom and snort this line of lurve, girls and boys! Delight as visions of The Real Thing, Van McCoy (who may forgive the album title), Earth Wind & Fire, The Trammps, and all your discotheque faves flash before your altered synapses as you whirl around the living room, the big medallion slapping against your favourite chest wig. And that’s just the women!

Sing along to the girls’ chorus as you shimmy like a shimmying thing… “Backstop! We can have our cake and eat it. Backstop! Why are we having to repeat it?” Leave your troubles at the door as you step out on the floor, to… “You should fervently believe that hard is better. If you don’t, you’re just naïve, hard is better, oh yeah!”

From fevered nightmare to shiny download took Rhodri a mere ten weeks, an amazing feat made the more wowser in that the only artificial stimulant in use was caffeine. Possibly. Smashing the charts, and Rhodri making an oddly hatless appearance on the kulcha section of Newsnight (no, really!) that no-one watches can only mean Brexit is repealed in a sudden awakening of national disco-fuelled joy and love. Or not. One fervently hopes some fucknut with an irony bypass working for the Brexit Party (tonight, baby, oh yeah!) uses one these tunes in a promo campaign.

I got Rhodri down off the ceiling long enough to ask him these pertinent questions:

What gave you the idea to make a disco album about Brexit? Party on down while the world burns?

I think I reached the stage where the only thing that could stop me watching the NEWS all the time was to immerse myself in something creative. The disco idea came first – I love those Alec Costandinos albums about Romeo & Juliet and The Hunchback of Notre Dame and wanted to do something like it – and the Brexit idea second. Brexit seemed fitting, partly cos it’s a modern tragedy, partly because it’s all I bloody think about.

How long did it take to write and record?

10 weeks from conception to release.

Incredible! Speed of release was obviously of the essence, but will there be physical media available?

Someone’s got in touch to ask about doing a vinyl release. It might happen, but at the same time if we put it into production now, by the time we get the copies it’ll be post-October 31st and the world could look very different.

It seems fairly obvious to me that anyone creatively active has to be open to outside influences, and have a questioning mind, so most are by inclination going to be anti-Brexit, which is a closed-off mental cul-de-sac and the natural terminus of conservative thinking. I fail to understand how any creative could favour the current political leanings of this benighted isle! Soz, that was more a statement than a question!

Yep, I know what you mean. Certainly if you look on Spotify for Brexit-related music (and there’s a lot of it) there’s stuff that’s good (100% remain), stuff that’s alright (mostly remain) and stuff that’s objectively shit (50% remain, 50% leave).

We were both at the rather fab Magma gig recently. After Halloween it may well be much more difficult for UK bands to tour over the Channel and vice versa. It’s all very sad. Will it affect you personally in that way?

I mean, I remember touring Europe before 1992, and it was a bit of a faff but it wasn’t impossible. I’m hopeful that it’ll pan out OK. We’re not at war, despite the Tory party hinting that we are.

Any chance this could be played live? I’ll bring a party hat!

Only if someone gives me a few grand to rehearse a band for a week. Seems unlikely, but who knows.

Time to get the payola going…