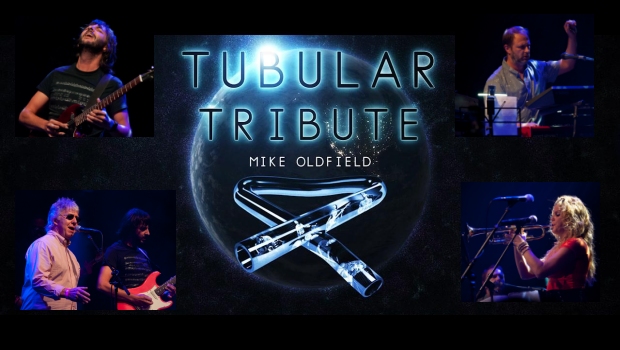 In 1979 I witnessed for the first (and last) time a performance by the legendary Mike Oldfield, together with a choir, an orchestra and an extensive rock ensemble, when he visited my hometown The Hague in the Netherlands to perform at the Congresgebouw as part of his recently released double album Incantations. I was very impressed.

Fast forward forty years. I witness the performance of a Spanish Mike Oldfield tribute band at De Boerderij in Zoetermeer and once again I am very impressed. In this particular case it’s the Tubular Tribute from the northern Spanish province of Asturias. These six musicians, five men and a lady, perform the original music of Oldfield live on stage in an enthusiastic and intense way and reproduce the iconic themes that the maestro himself has played during his long career and various tours around the world. There aren’t that many bands around that venture into the long, complex instrumental song structures, hats off. The band visits the Netherlands for a small tour that would take them to four venues including Purmerend, Amsterdam, Zoetermeer and Uden. There’s no doubt that they can play, judging by videos on YouTube and the wildly enthusiastic reactions from fans throughout Europe. But live on stage at De Boerderij they far exceed expectations.

Tubular Bells is the obvious opening track with surprising trumpet and female vocals, the glockenspiel comes from a collection of keyboards. Delicious unison guitar parts and many switches between instruments, not an easy task. This iconic track, including a little interpretation of its own, takes almost twenty minutes. Interestingly, original Mike Oldfield producer, Tom Newman, is responsible for the legendary introduction (on tape) of the instruments. A standing ovation is the well-deserved reward from the audience. 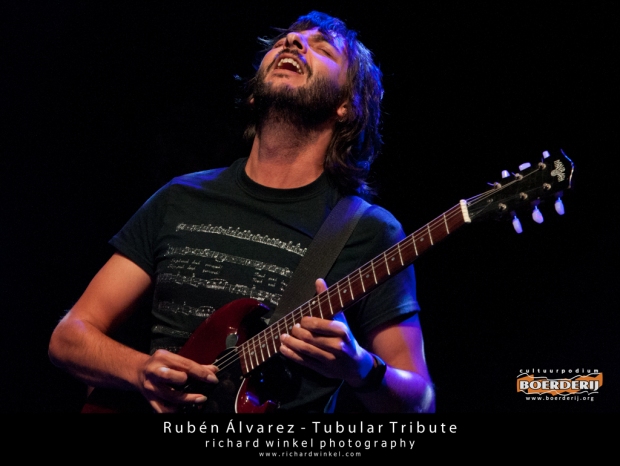 Protagonist/guitarist Ruben Álvarez has come up with a few Dutch words to welcome us. Some 300 men/women were able to find their way to the Zoetermeer rock temple on this late summer evening in September. And they were richly rewarded for doing so. To France is the extremely recognizable hit song from 1984, Ariane Valdivié’s vocals are more than adequate, Maggie Reilly’s level is not achieved but that is no shame. The first surprise is the presence of former Mike Oldfield singer Barry Palmer. Good old Barry (61), responsible for vocals on Oldfield’s Discovery from 1984, plays a leading vocal role on Poison Arrows, a wonderfully rocking song.

Mount Teide is qualified as a “difficult piece” by Álvarez, who is responsible for most of the introductions. But the melodic song, which has the highest Spanish mountain on Tenerife as topic, should of course not be missing in a show from a Spanish band, although certainly not an obvious choice. Sheba, from QE2 (1980), is the favourite song of keyboard player Richard García’s, his vocoder and the lead vocals from Valdivié ensure a brilliant rendition. Ommadawn is not only my personal favourite but also that of Álvarez’, witnessed by his intro about the “most beautiful album of Oldfield’s”. The stunning acoustic opening section gives me goose bumps, the song is the ultimate showcase for the virtuoso guitarist, his dexterity brings the fans into ecstasy, halfway through the song after a dazzling solo. Flutes and choirs come from a box, in this case García’s keys. The provisional climax of the show takes around 20 minutes.

Frontman Álvarez complains about the difficulty of selecting more than two hours of superb music from the maestro’s extensive oeuvre. The suggestion from the audience to play four hours is received with laughter and approval. For In High Places, originally sung by Jon Anderson, Palmer returns to the stage. He clearly has difficulties with the high notes of the ex-Yes vocalist, and is regularly outclassed by singer Valdivié who definitely grows on me as the show progresses. The next song, Crime of Passion, has only been released as a single. Palmer sings “could we get much higher”. Unfortunately not when it comes to the high notes, would be my answer to him. 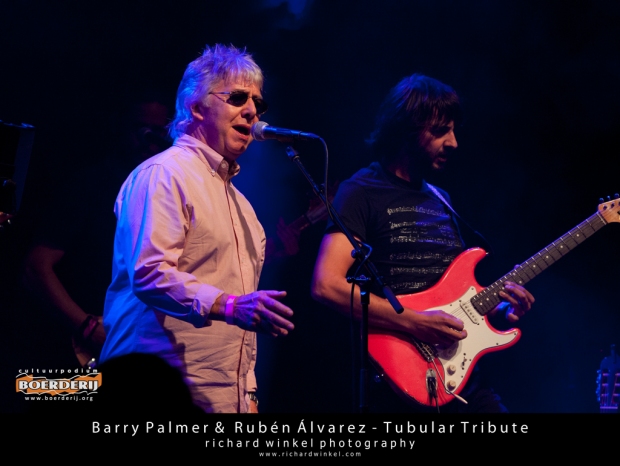 Mike Oldfield has an unusual playing style as a guitarist which is completely emulated by bandleader Rubén Álvarez. Just like his hero, he plays with his fingernails in the so-called “finger picking” style. By pushing up the strings, he creates vibrato, thereby accentuating Oldfield’s unmistakable scorching guitar sound. And all of this while switching mega-fast between five guitars, both acoustic, electric and mandolin. In addition, the way in which he is totally captivated by the music and his own play is a sight to see: grimacing, moving his head rhythmically, completely absorbed by the music, with that expressive head of his, looking like a cross between The Who’s Keith Moon and Animal of the Muppets.

The band plays solidly and tight and makes hardly any mistake. Keyboard player Richard García is rock solid musically, a bit like what Roger King is for Steve Hackett. He conjures up an arsenal of sounds from his partly retro instruments and also provides background vocals and vocoder. Second guitarist Ángel Secades remains literally and figuratively in the shadow of Álvarez. That does not mean that he is inferior in terms of sheer technique. Especially in the moments when he plays lead guitar (Tubular Bells, Ommadawn) where he demonstrates his extraordinary capabilities. The rhythm section, drummer Luis Senén Fernández and bass player Kike García, do exactly what they were meant to do: lay a solid foundation for the busy and intense musicality surrounding them. With an extra mention for the bass player who reproduces the tricky and repetitive bass runs during magnum opus Tubular Bells, apparently without any problems. Oldfield himself once said that his hands were literally aching from these complex bass parts. Although I honestly wonder what the added value of the trumpet is, I gradually became more impressed with the aforementioned Ariane Valdivié as a singer. They are big footsteps to fill, especially those of Maggie Reilly’s, but the Spanish lady is doing brilliantly; her voice is clear and her range is more than sufficient to bring the iconic vocals to a good ending. 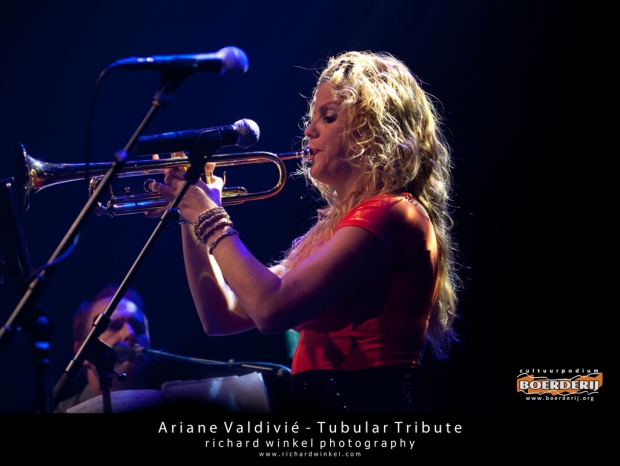 Punkadiddle is Mike Oldfield’s version of a punk song, played here as an energetic duet between keyboards and guitar, with loud applause from the enthusiastic crowd. In addition, Return to Ommadawn is both a surprising and daring choice, this is the latest album from Oldfield from 2017, never performed live. The ten minute selection the band plays is received with great enthusiasm. The recognizable tones of Trick Of The Light with Barry P again as vocalist in this relatively simple rocker with an ever-increasing role for miss Valdivié. This evening she is dressed in an exciting red T-shirt with the handwritten word “Holland” on it.

The announcement for Platinum is done exactly as Oldfield once did on his Montreux video (pronounced as “Montreeuuks” in Spanish). The characteristic pivoting guitar play on this punky and heavy song with female scat vocal plus a great duet between singer and guitarist, makes this a brilliant track. Definitely in the “noisy but effective” category. From Amarok from 1990, Tubular Tribute has opted for a part of acoustic free format jazz in the style of Al DiMeola, expertly executed. Moonlight Shadow, the big hit from 1984, is played by Álvarez on his red Fender.  Unfortunately, the song is played somewhat sloppily, or rather bungled. Peace from Tubular Bells 2003 goes off to a false start, Álvarez’ guitar is clearly out of tune. And of course it would be disrespectful to play Oldfield’s sacred music when you’re out of tune. So a new start is insurmountable. Also featured in this track is keyboard player Richard García, delivering a great organ solo. The volume goes up for this true “party piece”. 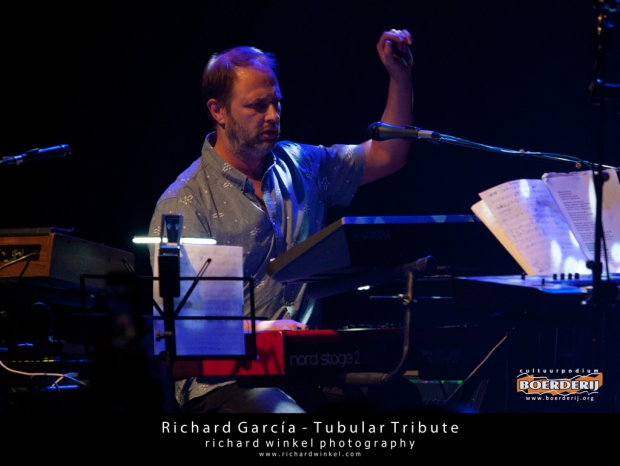 After the band has briefly left the stage, the inevitable encore Shadow on the Wall is next. This is a very different Shadow from the Moonlight version, much darker and heavier. Palmer features vocally in this song, originally sung by Roger Chapman, alternated by bass player Kike García, the crowd is going wild. After about two hours and fifteen minutes, the seven-fold Spanish formation gratefully receives the standing ovation from an ecstatic crowd.

A couple of times already I have expressed my reservations in relation to the tribute band phenomenon. But as these gentlemen and lady of Tubular Tribute perform their duties with respect and dedication, I am completely won over. And let’s be honest: the chance that we will ever see the original on stage again is extremely small, perhaps even nil. This way we can enjoy the fabulous music that Mike Oldfield has given us over the years for a long time to come. Duly noted.

CREDITS
Photos by Richard Winkel (Cultuurpodium Boerderij) and included with our thanks. 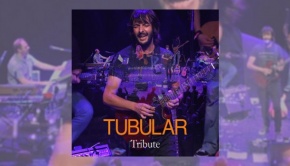