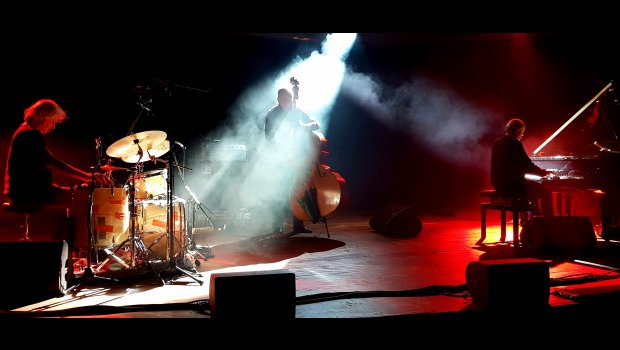 After an afternoon spent within the highly interesting confines of London Docklands Museum for the Lost Rivers of London exhibition, we arrive at the faded glamour of EartH (Evolutionary arts Hackney, in case you were wondering) in anticipation of what would be another band struck off my bucket list, in a venue I had never been in before. Win, win, win!

The venue is a former cinema with its seats removed, providing a spacious sloped and widely stepped area behind what would have been the front stalls, where seating was provided. With its decor in a very dilapidated state, an air of decay hung over the place. Thanks to my recently made friend Denis (Farcebook still has its uses) we had seats near the front, facing a medium-sized stage.

At this point I should tell you that approximately two hours before the gig I was afflicted with the familiar precursor to my old friend the migraine, when I suddenly found I could only clearly see one half of the CD case I was reading in Fopp. Neurofen (other pain killers are available) was duly purchased, and suitably dosed up, the onset of a thankfully mild headache was bearable enough that I went ahead with attending the gig.

Australian purveyors of deep thought set to music, The Necks have been in existence for some 30 or so years, and although I have occasionally come across their music, I have never immersed myself in any of their many releases. As The Necks tick a fair few of my boxes, which are rhomboid rather than four-square, I knew it would be a good idea to see them live, and as it is on the stage is where a band bares its soul for good or ill. 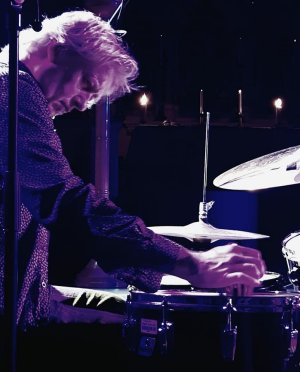 Just before 8:15pm Chris Abrahams, Lloyd Swanton, and Tony Buck walk on stage and after a brief introduction from double bass player Lloyd, gently push out their gleaming craft on the still, hushed waters of the audience’s palpable expectations. It was obvious from talking beforehand to those sat next to me, one of whom was attending his twelfth Necks performance, that something akin to a religious experience washes over the band’s many disciples, an audience built up over the years, firstly by word of mouth and latterly internet, a true cult! This ties up with what my good friend Jez was saying in his recent Gong review about music being the closest thing to religion for a lot of us, you reading this probably, and me writing it, certainly!

The Necks’ music contains themes as launch pads for lengthy improvisations, so no two shows will be the same, and they do not play, as such, pieces from their back catalogue, although having bought their latest CD, Body, at the gig, themes from that seem to have been used in the performance tonight, the subsequent improv taking it elsewhere.

The first piece lasted 35 minutes and was a gentle but insistent yet soothing mantra constructed on musical conversations between Chris’s piano, and Lloyd’s double bass, occasionally bowed, but mostly plucked. A word I tend to avoid in reviews is “cathartic”, as it has to be one of the most over-used descriptors in amateur scribbling, and I am as guilty as anyone, but (you knew there was “but” coming, didn’t you?) if ever it applies, it applies to this piece. Especially so given the somewhat delicate state of my misfiring synapses. I found myself getting lost in the intricacies of musical sentences started by one instrument and finished by another, and had I not looked at my watch when the piece started I would not have been able to say with any accuracy how long the piece had lasted, it could have been ten minutes or an hour. In the interval that followed, I noticed that the thrumming in my noggin had now subsided to a hardly noticeable level.

The band had played in Brighton the previous night, and Joe, the “dozen Necks gigs veteran”, and Denis had both been there too. Joe was rendered near speechless. I can see why! The power inherent in this music is transformative and you cannot help being affected by it.

After a twenty minute interval, the band return and launch into their second piece, a much harder hitting journey, where drummer Tony Buck comes into his own, driving the music with a propulsive rhythmic heft (oops, another review favourite!) that inspires Chris into chordal crashes, a sonic tsunami of controlled power hitting the metaphorical beaches of north-east London. I am glad they played the pieces in the order they did, I don’t think my head would have survived otherwise! In hindsight, as I have said, themes from the Body album appear, and it shows you the magic of this trio that the plentiful guitar on the album, played by Tony, is not missed in the slightest tonight. 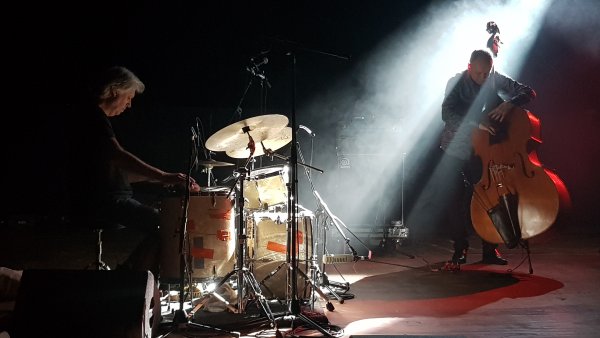 The Necks play intellectual music, but with a beating heart often absent in the over-earnest emoting of some bands I could name, but won’t, obviously. Australia is not a place one normally associates with intellectualism, but it just goes to show that stereotyping is a lazy means of observation. If you get the chance, catch The Necks live, you will emerge slightly changed, and for the better.

By the way, by the time we caught the train home, my headache had largely gone, thankfully.

Photos by Joe Richards, used with many thanks.