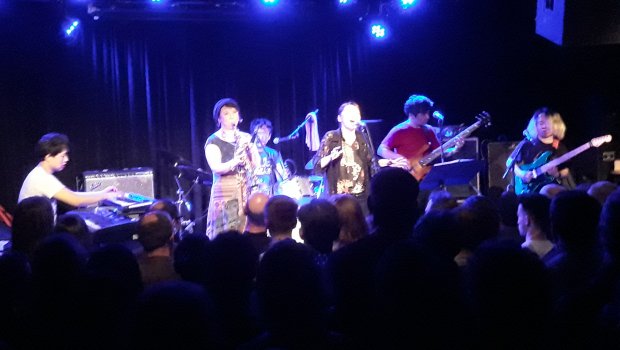 But first, The Brackish.

As support gigs go, this was always going to be a tall order, but the recent Bad Elephant Music signings from Bristol put in a highly entertaining shift – of which I sadly only caught the last two numbers, due to a timing discrepancy involving a local curry house. Many apologies for that, but I’m glad that I saw some of the set as I’d definitely make a point of being there early next time.

Over a solid and interesting rhythmic pulse, the twin guitars had room to breathe, twining around each other to form a conversation. Via the differing tones, featuring slide and echoing spaciness amongst others, the talk occasionally turned to argument, and sometimes a schizophrenic tug over which voice deserved to be heard. For me, pleasing elements of Battles’ staccato picking started creeping in at times and they worked hard to put on a good show with an engaging instrumental sound that held the audience right through to the end.

The Brackish did well and got an appreciative response, so hopefully they’ll be back again soon.

With the room pretty near full, it was time for the debut U.K. show by Japanese legends Kōenji Hyakkei.

Master drummer Tatsuya Yoshida should be well known from the myriad projects he has been involved with over 30 years, including Ruins and its off-shoots. I reviewed a blistering Sax Ruins show for TPA in 2016, and my observations then feel even more appropriate now: The really innovative stuff no longer belongs under the ‘Prog’ banner.

This isn’t Prog. I’m at a loss to properly explain exactly what it is, and once again, that’s not the point and it really doesn’t matter.

Kōenji Hyakkei began a staggering 28 years ago, Yoshida joining forces with the operatic vocals of Aki Kubota from the band Bondage Fruit. With four albums in the first 14 years, Aki, who sadly died last year, was replaced by Kyoko Yamamoto for 2005’s Angherr Shisspa, and then current singer AH joined in 2008, but it took until 2018 for the next album, Dhorimviskha.

The bass of Kengo Sakamoto (who came aboard for Viva Koenji! in 1997) and soprano saxophone of Keiko Komori (also part of the setup since Angherr Shisspa) are essential elements of the expansive sound, with striking contributions from new recruits keyboardist Taku Yabuki and guitarist Kei Koganemaru, the whole thing driven along by Yoshida’s hyperactive drums.

It’s an unholy riot of sound, but don’t go thinking that it must be lacking in melody as that would be way off the mark. It’s unorthodox and takes a bit of getting used to if you’re not familiar with the workings of Zeuhl, but seldom has there been such a rewarding listen for those striving for something vibrant and new. It’s dynamic and exhilarating and in the hands of a band of this quality it’s about the nearest thing I can think of to a religious experience.

From the opening bars of Becttem Pollt, from Nivraym, you could almost see the audience’s hair (those blessed in that area at least) streaming out behind them in the blast of white-hot plasma emanating from the stage. This is clearly a band not to be messed with and I don’t think I’ve ever seen such a tight group of musicians, negotiating the handbrake geometrical turns not only with ease but also a radiating enthusiasm and joy. This is not furrow-browed studiousness, it’s life-affirming energy and charm. If they could bottle it they could retire immediately – but you just know that they wouldn’t; this is a passion, the playing of this intense music a vital necessity to them.

It’s the catchiness of the material that takes you by surprise, how the pieces can be so complex and accessible all at the same time, the multi-layered and disparate parts swirling around each other to emerge into something new, often in different keys or tempos. I’m not a muso, but if I was I’d no doubt give up after experiencing this – but I hope that’s not the case for the many talented and noteworthy musicians who were present!

I can’t explain in technical terms what Kōenji Hyakkei actually did during the however-long they were on stage (no one was clock-watching, I can assure you), but I know damn well that it reached places in my brain that most other stuff I enjoy listening to just doesn’t. And don’t worry about the fictional language of the lyrics, like Magma it’s all part of the atmosphere and fits the music perfectly.

Speaking of that behemoth of Zeuhl, there are very occasional hints of Magma in some of the vocal sections, but overall the sound of Kōenji Hyakkei is entirely distinct from their illustrious French cousins. The intense mix of jazz, noise, prog and classical is intoxicating, and at its heart is the beyond superlative vocals of AH – my God, this woman can sing! Rattims Friezz allowed her to show the full range of her extraordinary and powerful vocal talents and, moving from jazz chanteuse to opera diva to soul enchantress with ease between bouts of hyper-dancing during Rissenddo Rraimb and others, she’s the focal point of the performance, alongside Keiko Komori, with otherworldly synchronicity between sax and vocals through each gymnastic duet.

With five singers in the band, the variety of the contributions and the coming together in a choral whole is a complete joy. Keiko’s dissonant sax squalls often take things into free jazz, but not for long, acting as an accent in the intense passages, and then you’ve got the jaw-dropping keyboard additions from Taku Yabuki, as evidenced on the jazzy flourishes of Phlessttighas. Every contribution from each member of the band was slide-rule perfection, nothing out of place whatsoever, and that’s just amazing in itself.

Yoshida himself must be the most unassuming musician around, selling merch before the show and always seeming slightly bemused by the ecstatic response his music elicits, almost unsure what to do about it, but he becomes a wild thing in the throws of performance, all flailing sticks and demented vocals when the music calls for it. A complete spectacle in his own right and a privilege to experience.

My colleague Mr Phil Lively had decided not to do his homework beforehand and was in the dark about what to expect. After the first song I looked over to see his mouth agape. I gently lifted his lower jaw back into place – but his mouth was right to be astonished, a simple reflection of the impact the music was having on his whole self; a kaleidoscope of sounds, keys, tempos, feels and styles, all merging into a swirling cacophony of many colours.

And to top that off with an encore of dozens of snippets from familiar classics played at a thousand miles an hour. Just ‘Wow!’

This complex and unorthodox music is never going to be for everyone, but if you ever get the opportunity to see Kōenji Hyakkei play live, you deserve to experience the joy of this most wonderful of bands for yourself. 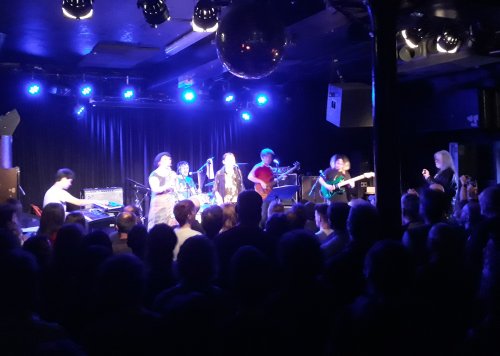 And now, a brief résumé by Phil Lively, entitled “An Encounter with Three Gentlemen and Zeuhl.”

“Greetings Phil! Fancy some nonsense in That Larndon in May? I’ll do the tickety goodness thing this week if you’re interested”, said Jez.

Jez sends a link to a well-known American video-sharing website (based in San Bruno, California).

“I’m just playing that video. I have to say, I’m not warming to it”, I grumbled. “It sounds like Klingon Opera. But every experience is of value and I get to meet you guys in that London”, I said, “so I’m in”.

“It tickles my oddness bone”, exclaimed Jez, “so it should be fun. Great stuff and mad as a bucket of badgers.”

I look forward to the gig.

It transpires that we have tickets for Kōenji Hyakkei. They are Zeuhl. Zeuhl is a style of music with its roots in 1960s France and should not be confused with Zuul the Demigod Gatekeeper of Gozerand and minion of Gozer. It is an important distinction.

The day comes and off I trundle to that London where I met Jez and Roger Trenwith from TPA and Charlie Cawood (a troubadour of considerable talent) for a King’s Cross curry before the gig. We enjoy a lovely chat as we stroll up the hill to the Lexington, where we catch some of The Brackish’s set. Describing themselves as “Psychedelic vanguards and misfit maestros of Bristol’s BLOOM music collective”, they were not what I expected and if I’m learning anything it is that I should stop expecting things because I am invariably wrong. I wished I’d seen more. They were quite splendid.

Apart from that one brief flirtation with Kōenji Hyakkei, I had deliberately avoided further contact with their music because Jez and Roger said my reaction would be funnier.

Then I witnessed some Zeuhl – and I liked it.

Such was the zest, aplomb and horologistic accuracy of Kōenji Hyakkei, that after the first song I turned to my fellows with my mouth gaping like a hungry fledgeling. I may have exaggerated for comic effect, but hopefully my reaction did not disappoint.

Kōenji Hyakkei’s set was joyous, accurate, exuberant. The musicians were not only expert, but between numbers they demonstrated that they were charming and funny. No pretension, they simply delight in their ability and I think they were somewhat over-awed by the response of their enthusiastic audience, which added to their charm. Their set was, quite simply, magical and their encore, a medley of every overture from every piece of classical music ever written, performed in about 5 minutes, was mind-blowing.

Some final words from a similarly bamboozled Roger Trenwith:

It is a rare event when a vast amount of technical excellence and precision playing is perfectly complemented by the sheer humanity and soul present in the delivery of music. Added to that the obvious joy the individual members that make-up Kōenji Hyakkei take in simply playing this bewildering music, and you have a near-perfect gig experience.

The audience, whose average age was refreshingly nearer to 35 than 65 only serves to highlight the sad fact that the average prog fan runs a mile from music that dares to take risks, such as this wonderful racket. On the other hand, it is pleasing to see so many relative youngsters cutting several rugs to music that is a million miles from the same tired old safe rock options favoured by so many in our small but overcrowded pond.