Peter Jones commences the evening with his customary “Hello, You Fellows” greeting and the band launch into the suitably bonkers Toad of Toad Hall, from the recent side project album Story Tellers, Part Two, based on Children’s stories. It’s certainly a uniquely eccentric way to commence a gig with Jones deploying his great mastery of voices and his keyboard, ably supported by this talented band. It’s also a world away from Jones’ other Progressive rock band, Camel, whom he has toured with since 2016, successfully showing his great versatility and talent on a larger stage. The atmosphere changes significantly for the Feels Alright section of Don’t Let Go, Feels Alright, simply one of the best songs Jones has ever written. He later explains that with an hour long set and a desire to include some newer songs he felt he had to edit this classic song… some may disagree! The middle of the set is dominated by more songs from Story Tellers, Part Two with the touching Match Girl with Jones on keys and bassist Mick Wilson playing the rather novel Melodica instrument. Hygge from The Depths of Winter is perhaps one of the most ambitious (and Genesis-like) songs in the set, showing how adept Paul Comerie is on drums, equally at home with more subtle percussion as he is with rocking out. 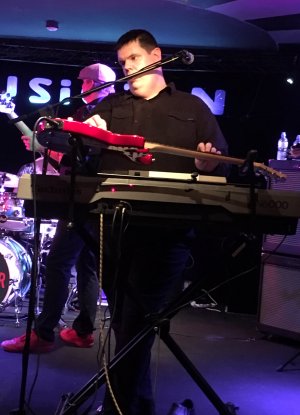 Tigers in the Butter is the largely instrumental set piece in the show, demonstrating Jones’ great abilities on keyboards and guitars in this memorable and poetic testament to those who feel “We live our lives in fantasy”.  Andy Wilson skilfully interprets the great solo guitar piece Jones devised for the album, although this fabulous song does not quite hit the stratospheric heights witnessed at their legendary Summer’s End Festival debut show in 2016 – a shortened set demanded a less flamboyant finale sadly. Another comical piece The Merry Vicar follows with its popular chorus shouted by the audience. However, one wonders whether in an hour long support slot whether there is really room for two Music Hall type romps along with Toad of Toad Hall, and maybe it’s time the popular Merry Vicar had a sabbatical? These are difficult choices for Peter Jones as he knows some songs in his set are very popular, and some would be disappointed if a particular favourite is excluded, but he also understandably wants to introduce new material. Of course, there is one song it is unlikely Tiger Moth Tales will ever be able to drop from their set and there’s an audible sigh of relief when Andy Wilson pulls up a stool to play the classic acoustic guitar intro to A Visit to Chigwick – we’re instantly transported back to “A Tuesday afternoon in 1967” by this beautiful and nostalgic song which has become a modern Prog classic. Tiger Moth Tales have gently ‘warmed up’ a substantial and enthusiastic but respectful crowd with a set leaned towards the more restrained and pastoral in atmosphere on the whole.

Red Bazar enter the stage soon after, bearing an uncanny resemblance to Tiger Moth Tales! These two bands may be identical in line up, but they perform as two very distinct bands, with very different emphases and spirit. They rather spectacularly launch into a rocking version of Queen of the Night (pt 1) from their excellent first ‘vocal album’ Tales from the Book Case, with smoke pouring and lights flashing. Formerly an instrumental band, Peter Jones joined Red Bazar in 2015 to add lyrics to their music, which has helped developed their sound. Whilst Tiger Moth Tales is Jones’ project he is very much an equal part of the band in Red Bazar, the standout of this opening song, and much of the show, being the flowing guitar skills from Andy Wilson. Temple follows, the remarkable and striking opening song from Red Bazar’s excellent new album Things as they Appear, with Jones’ in chilling form on vocals, performing as some sort of megalomaniac preacher. The hard-hitting Liar and Spiral continue to showcase the new songs, with Jones skilfully performing the memorable serpentine synth solo created so well on the new album by Gary Marsh, whom has since left the band. The standout track from Tales from the Book Case, City and the Stars, once again showcases Peter Jones’ remarkable voice which is stellar in quality. The song’s references to dystopian novels seem in keeping with the dark subject matters which permeate much of Things as they Appear. Jones’ voice is given a rest as Red Bazar rock out on an older instrumental called The Meet, which is a real opportunity for Mick Wilson to shine on bass with Comerie on great form on drums.

Sunset for a New World provides a more gentle interlude, with some fine vocal harmonies from Mick Wilson, and then they return with a vengeance to the much harder edged material from the new album. Nothing Left is a powerful, moody number which builds in intensity up to a sinuous synth solo from Jones in a song which laments the divisions caused by recent events and the poisonous influence of social media in public debate. The Parting (which Jones made a point of pronouncing very carefully!) continues in a similar musical thread as Red Bazar’s heavier rock infused direction underpins the darker lyrical themes. The main set ends with the foreboding We Will Find You, which has echoes of Peter Gabriel’s Intruder, the whole band donning dark sunglasses to emphasise the sinister feel of the song, although as ever there is a hint of mischief in Jones’ lyrics as he takes a dig at self-appointed judges in society.

The crowd react very positively to a set which really rocked The Musician with a fine display of power and skill, couching thought provoking songs in accessible heavy rock songs, which must have delighted ‘Prog Hero’ promoter Danny Mayo. The real surprise of the evening was the rather incendiary encore as Andy Wilson skilfully plunges straight into the unmistakable opening guitar riff of Burn by Deep Purple. Jones has previously shown on Queen of the Night his vocal dexterity in coping with heavy rock singing, but it’s still fantastic to hear him pounding out this song in a fashion of which David Coverdale would be proud. Mick Wilson and Paul Comerie thunder along on bass and drums like some sort of musical bomber and the evening comes to an explosive and unexpected finale.

This was the first showcase gig in the U.K. for Red Bazar to perform Things as they Appear, and the excellent new songs certainly come alive even more in a live setting with an undoubtedly talented band – if you get a change get along to see these guys in action. They are an excellent live outfit, and some times things really are as they appear.

RED BAZAR SET LIST
Queen of the Night (Pt 1)
Temple
Spiral
Liar
City and the Stars
The Meet  (Instrumental)
Sunset for a New World
Nothing Left
The Parting
We Will Find You
~ Encore:
Burn  (Deep Purple Cover)

All photos by Leo Trimming.