Time portals, sausages in the air, and heads leading independent lives to bodies are just three things one goes to gigs like these for, oh yeah, baby!

A tempestuous and bursting climate greeted our arrival in the capital for our first gig of the year, the meteorological signs and portents of intellectual turbulence to come. Phil W and I first sauntered… ok, tubed, it was non-perambulatory weather… down to Waterloo for what I believe was the first day of the thought provoking, sometimes harrowing, but ultimately hopeful Nelson Mandela exhibition. Well worth £15 of anyone’s money, and a must for anyone with a conscience. Just as we had made our way round, there was a power cut caused by the builders next door to the venue, leading to a probable evacuation of the premises, so impeccable timing on our part!

After rendezvousing and chewing much fat (plus chips) with two more of our nebulous crew in our travellers’ hostelry of choice, we made our way to the venue whilst cowering underneath the now completely shot climactic plumbing system, getting a good old British dousing in the process. Thankfully, the somewhat culturally isolated and charmingly monikered The Slaughtered Lamb soon appeared through the leaky gloom. As we waited outside the doors to the basement venue below the very noisy pub, we became aware of a time portal, for through the portholes we espied jousting, and loons going about the arcane business of ye sound-checkinge. Neither in the past nor the future, a parallel time unfolded before our rheumy eyes. 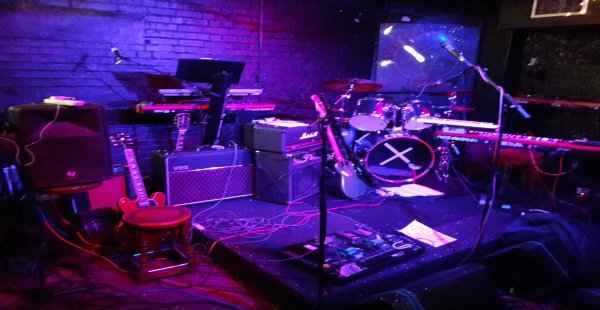 Snapping back to “reality” for a moment, and once inside the small venue, I was struck by the tiny stage and wondered how the 17 members of Lost Crowns would fit on it. I need not have worried, it was something to do with linear displacement and reverse relativity. I guess the venue probably holds around 60 or 70 at a push, and as the evening progressed it became thoroughly rammed. And hot. Boy was it hot, what were they trying to hatch? Whatever it was, it smelled of sausages. Cumberland sausages.

First up was a troupe of nonconformist misfits going by the name of Wryneck who were the pop fun band of the evening, at least one of whom was on day release from The Institution… possibly. Most of the band members are veterans of the alternative scene with a history going back decades, being entwined with the very left-field Beefheartian pop-psych band Zag and The Coloured Beads, who have a tune called Julian Bream In Space With Drugs. That should give you an idea! 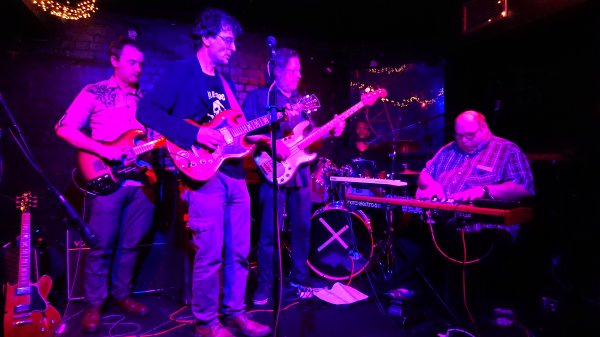 During one song, keyboard player Simon Beck took a short solo on a Stylophone Gen-X synthesiser, a fittingly appropriate piece of musical theatre. This was only the second gig for this recently revised band, but the rough and ready sounds emanating from the stage suited their energetic approach and the Tigger-like enthusiasm of their leader, singer-guitarist Steve Arthur, to a tee. With lyrics like “Causing chaos around this town, you can’t even keep your dinner down” and grinning like a fool when he missed his cues, Steve’s and the band’s goodtime vibe was infectious, and soon, led by the celebrity dancers in the front row, the audience was doing the Bobbing Ripple Two-Step almost completely unaided. One of my feet left the floor! Oh, and one of their numbers sounded like Led Zep playing a Real Thing song. Trampled Underfoot without the frowns or the chest wigs. They were the Freddie and The Dreamers to Lost Crowns’ Cockney Rebel.

George Robey looked in from 1894 and approved. The time portal was proving useful.

Next up were Ham Legion, a rather intense but nonetheless rhythmically intriguing three-piece who had a hard act to follow (Wryneck, not George Robey). They were very tight, but perhaps lacked the natural bonhomie of Wryneck. Encouraged no doubt by the Celebrity Dancers & Chorus Line, as their set progressed they loosened up a bit and got better. 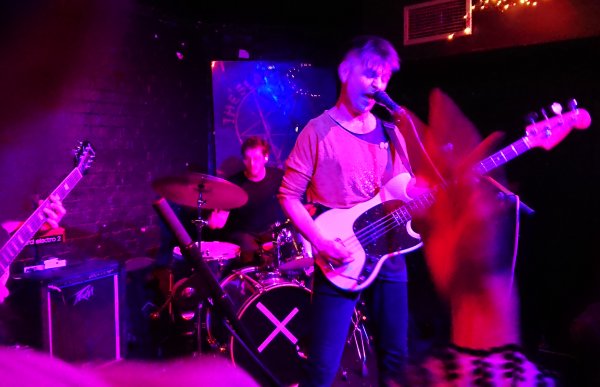 By about halfway into the set I had acclimatised to Nick Howiantz’s somewhat idiosyncratic vocal style. I particularly liked the alt-pop of Georgie Porgie which as it turned out, despite getting the audience to quote the nursery rhyme back at him, Nick then told us the song had nowt to do with it, the cheeky chappie! Following the spontaneity of Wryneck was never going to be easy, but they got there in the end. 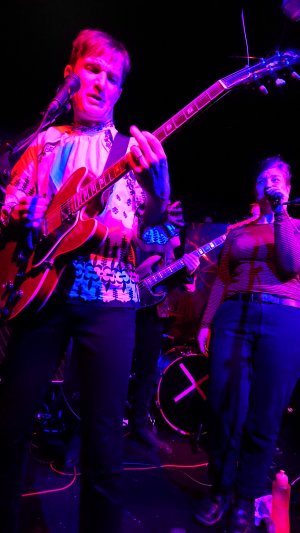 The apposite folderol of Lost Crowns is something I’ve looked forward to seeing again since the first time I entered their synapse-altering musical scullery last summer to borrow a left-handed arpeggio in 15/8. Only just below the surface there is a massive organic computer connecting all the seemingly random strands that make up this band’s beguiling and wobbly music, the folderol is only to catch your eye.

Richard Larcombe, who had spent most of Wryneck’s set dancing like a conduit for an alien shaman seems to be a man of boundless energy, as this expending of many joules seemed to have had no effect on him as he led his band of 35 through the labyrinthine convolutions of their quite surreal arrangements. The enactment of linear displacement had somehow allowed the 43 members of the band to fit on the postage stamp-sized stage with ease, and no-one knocked over their pints, or inadvertently elbowed their companion in the eye.

I suspect keyboard wizard Rhodri Marsden has a lot do with gluing all this together. I also suspect he is the musical director who imposes some sort of order on Richard’s inspired lunacy. Richard thanked his wife for preventing his evolving songs from “sounding like U2”. Actually after they do the Cardiacs’ cover Goosegash they should chuck in a version of Even Better Than The Real Thing in the style of Henry Cow, just cos they probably could. In any event, that was what Let Loving Her Be Everything sounded like until the refined taste of Richard’s good lady put a stop to it, or so we’re told by the grateful singer.

Their recently unleashed debut album Every Night Something Happens is now skipping joyously down the street, and is spinning, virtually or otherwise, in everyone’s audio device, and so Sound As Colour has now become a jolly pub singalong, as we all knew it would, and as indeed it should! That gig last June was only the fourth time they had played live, and since then, having recorded the album, and no doubt rehearsed and rehearsed again, they have become tighter, but although that removes the chaotic intros and shaggy dog stories, they are still a hoot. My mate and fellow TPA-er Phil Lively was right at the front, and was so close to Richard he could count his fillings. Phil enquired if he was intruding on Richard’s personal space. “No” said Richard. “How about now?”, as he leaned in closer and inspected the singers tonsils. “I don’t have any personal space” said Richard. Awwwww. 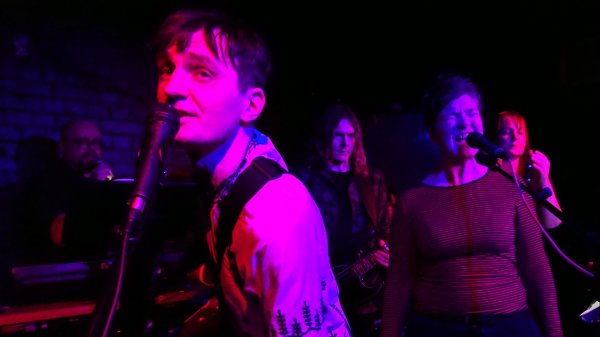 Bassman for the band is the ubiquitous Charlie Cawood, and I spent one number watching his fret hand, which by evolving into a miniature Hydra hypnotised me completely. I’m still dizzy. Seriously, there are some fantastic musicians in Lost Crowns, a cornucopia of musical delights in fact.

The Star Of My Heart was played much straighter than on the album, and thus planted itself firmly in love ballad territory, which was a surprise, with hindsight. I say that because it sounded so different at the time I actually thought it was a new song! They’s clever, them Crowns peeps. The only unplayed song from the album was Dandy Doesn’t Know. I wonder why? Maybe they would never finish it… then.

A quite deserved rousing reception and an encore later, and I never thought I would enjoy a U2 covers band quite so much. As we left the venue, I was offered a very tall cocktail containing a lamb shank and a white chocolate baby’s arm holding an apple, which always meets with approval in these quarters, even allowing for the £48 price tag. Once outside I was relieved to note that Thor’s plumber had fixed the fractured pipe, and I clocked that the pub was now called The Eviscerated Dolly. I looked at my watch and it was twenty-thirteen minutes to eighty six. It was around about then that my head left my body.

Until the next time…

[Black & White slideshow photos by Gary Franklin, colour band images by Phil Lively, empty stage image by Roger Trenwith, all used with permission and many thanks.]