Proceedings were preceeded with possibly the best value pizza to be found in London Town, and the freshly oven-baked thin crust delight with its accompanying scrumptious salad was just the thing to satisfy the wanton esurient desires of our motley crew, and it was a fabulous way to start the evening. Sadly, I can’t recall the name of the place, and it doesn’t seem to be on Google Maps. That’s no use at all, is it? 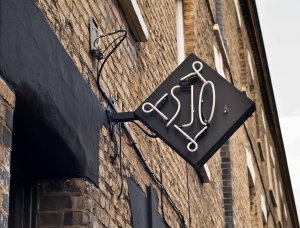 After wandering around for half an hour, having been put off the scent by the testy barman who greeted our original arrival at the Servant Jazz Quarters with “They’re still soundchecking”, the follow up “What would you like to drink?” being conspicuous by its absence, we eventually descend into the avant-maw of the SJQ, where no expense is met on lighting up the stairwell to such an extent that my ancient peepers struggled to see my feet.

The cellar probably holds around 60 punters when full, and the crowd who were arriving down the dimly lit stairs in a slow but steady trickle were entertained by Steve Davis’ esoteric tastes, as he spun various slices of vinyl exotica for our delectation. My TPA companion Phil Lively was soon being presented with record sleeves in answer to his queries as to what was going down, much to his glee. He’s probably still catching up with the mental list as we speak. Me, I recognised… ooh… at least two of the records spun, and earned one brownie point by discovering that Steve had yet to hear the new Jon Hassell album. It’s groovy by the way.

After a while the dark wizard and psychedelic magus of this and every parish, not to mention all-round good egg, Kavus Torabi took to the small stage, entertaining us with songs from his Solar Divination EP, some works in progress from a forthcoming album, and a couple of Knifeworld covers. Armed only with a harmonium and an acoustic guitar, this was stripped back and personal, and the vocals were as clear as a bell. A crack’d bell painted black, of course. I took a liking to Slow Movements, a song about space travel which unfolds in a state of grace as it wends its way through outer and inner space.

All in all a fine way to loosen us up for the headliners.

SETLIST
The Sentinel (instrumental)
A Body Of Work
The Invocation (instrumental)
Radio To Their World
Brighter Visions
Lowered Into Necromancy
Fatal Leap
Slow Movements
The Skulls We Buried Have Regrown Their Eyes
You Broke My Fall
MUSICIANS
Kavus Torabi – Vocals, Acoustic Guitar, Harmonium

Kavus introduced Lost Crowns as “the best band in London”, which is some billing to give a group that we later discover is playing only their fourth gig. As is the way nowadays, most of this line up play with other bands, and this musical coming together forms something of an underground supergroup. As it turns out both those descriptors are literal as well as metaphorical, for Kavus was not that wide of the mark. You see, Lost Crowns were new to me before tonight, so much so that I was engaging Charlie Cawood in conversation until he said “I should be up there”, a minute before he was due on the stage, me not realising he was part of the band. Eek! Sorry, Charlie!

My ongoing gig mission is to try to see as many bands as I can that I’ve never seen before, rather than see Hector’s Splendid Tricycle for the 105th time. What is that about, then, those folk who boast of such things as if it’s something to be proud of? Open yer ears, fer feck’s sake! There’s a whole sonic whorl out there, me lad… or lass, but it’s usually a lad, isn’t it? The girls know the score! Anyway, my search and destroy policy usually makes for an enjoyable experience, but seldom have I had my shell-likes tickled to eargasm in such a splendid fashion as they were on this warm summer’s evening in deepest London Town.

The first thing I notice is the drummer, given the name “Keepsie” in the personnel list I was given, probably because they want to keep their hands on him. Some of his fills, occasionally of the thunderous variety, and his many and varied rhythmic shifts were really quite something to both see and hear. 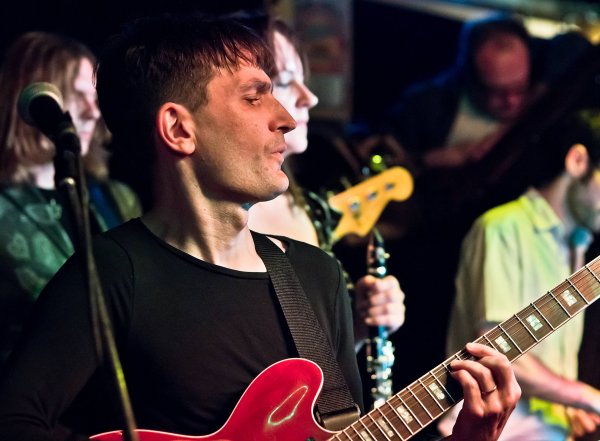 Drawing on members of North Sea Radio Orchestra, Knifeworld, Prescott, and probably others that escape my enfeebled memory, the matchless panoply of sound washing over us is given an added sweetener by Nicola Baigent’s clarinet, and to my left as I look, keyboard player Rhodri Marsden supplies stoicism aplenty as leader from a starry sky Richard Larcombe makes several attempts to get a bewilderingly complex guitar melody intro into some sort of order. Or as my TPA companion Phil L put it “Guitar based hand gymnastics and complex arrangements so convoluted that Mr Larcombe entered into drawn out but hysterically funny procrastination.” This involved the most surreal shaggy dog story you will hear this side of the river… drawing prolonged concentrated stoic stares from Rhodri. Rehearsals must be a minefield!

One song leads the listener down the rabbit hole with its lyrical convolutions, concluding with the statement “Bent spoons and women sawn in half, You think that’s true, Don’t make me laugh”, by which time even the most splenetic curmudgeon would be throwing shapes and grinning like a loon.

What else?… Oh yes, Sharon Fortnam of NSRO fame made a guest appearance on a couple of numbers, and looked like she was having a great time, as they all did. If you joined all the grins together, from band and audience, they would stretch all the way back to Euston and our train journey home. And they did!

Charlie… what can you say about Charlie? Apparently he learned the bass parts by rote rather than from a score. Knowing him it probably took him a whole ten minutes. Josh Perl, the Quiet Man of the scene, provided sterling support from the right hand side of the stage as we looked.

For all that, this is Richard Larcombe’s band, and boy he’s not made it easy for himself. Arrangements tie Gordian Knots in my noggin as I attempt to boogie my mind out of a corner it has willingly let this confounding but beguiling tuneage box itself into. Comparisons are both odious and indicative of lazy journalism, but nonetheless useful especially when a band has yet to release any of its music… so… imagine if Fred Frith had joined XTC, and they decided to cover Sound Chaser in the style of Cardiacs. Imagine that and multiply by a febrile imagination, and chuck in some spare cutlery for good measure.

And they covered a Cardiacs song! What’s not to like? Somebody sign this band now, it will knock the spots off your leopard. 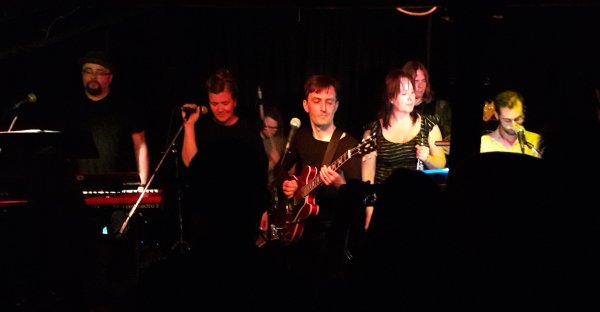 [Photos by Gary Franklin, used with many thanks, Lost Crowns whole band and Kavus Torabi full length by Roger Trenwith.]