How long has it been since I saw a band that inhabits the more extreme end of the metal spectrum? Well, a loooong time, but in recent years I have realised how much I actually love one of the bands that inhabited that ’80s/early ’90s melange of thrash. I never got to see Voivod at that time, despite catching most of the genre’s other big players, but my listening habits have veered away from that field over the intervening years while Voivod have been not so quietly going about doing what they do, which is the unexpected, remaining resolutely interesting for a career that has now lasted for more than 35 years. Voivod are the embodiment of what makes metal interesting, a trick that to my jaded ears most metal bands these days completely fail to grasp. The proggiest of metal bands, without actually being ‘prog metal’, Voivod have always used unusual elements of discord and jazz, sometimes adding a psychedelic edge to their sci-fi mythology that lifts it above the norm and underlines the spacey elements of their cultural moonscape. The members of the band have come and gone over the years, with only drummer Michel “Away” Langevin lasting the full course, but a potentially terminal blow was dealt in 2005 when guitarist Denis “Piggy” D’Amour succumbed to cancer. Other bands might not have found the strength to carry on, but armed with fragments that Piggy had written and his instructions regarding how they might be used, the band continued, recruiting Dan “Chewy” Mongrain in the process. 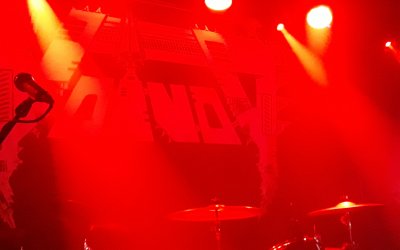 Voivod are now four albums in to their post-Piggy career, the recently released The Wake, described beautifully by my colleague Shawn Dudley, being a quite brilliant album on which Chewy has come of age, putting in a startling shift to make it one of the strongest albums of the band’s existence. It’s hard as nails, solid as a rock, yet bendy in all the right places, a fun and exhilarating listen, and I was keen to find out how the new material would fly live.

But first to the support band for this most intriguing of nights.

From Greece, Bio-Cancer are not a name that I have come across before, but feeling all metally, I was looking forward to seeing what a younger band might be doing these days. From the off they put on an energetic show, technically excellent and tight as a rubber glove on a penguin’s head. But the earnestness of the delivery and the barky vocals of Lefteris Hatziandreou, supported by group barking from the rest of the band did make me smile. I didn’t catch a word in any of the songs, but that isn’t a massive surprise. Part of me wants to say their sound is much like the name suggests, but this does the band a huge disservice as their twin lead guitar attack is dexterous, concrete heavy and bouncy and they put on a good show full of head-bangery and foot-on-the-monitor attitude. Particularly worthy of note is the drumming of Tomek Solomonidis. I enjoyed their brief set, despite not feeling the need to check them out much further.

A quick change over and the already fair turnout swelled considerably as time for the main event neared. The backdrop bathed in red light was a striking image, in fact the lighting for the whole set added to the otherworldly nature of the music. The Globe being what it is, there’s nowhere to hide and Voivod trooped down the stairs from the closed balcony area to huddle around the door stage right to await their cue. They failed entirely in trying not to be seen, but soon the lights dimmed and they were able to properly pass through the door and onto the small stage to a great cheer, immediately ripping into a battering Post Society. I managed to find a space at the corner of the stage in front of Chewy and proceeded to take a severe pummelling from the speaker for the next hour and a half, the band moving some serious air! 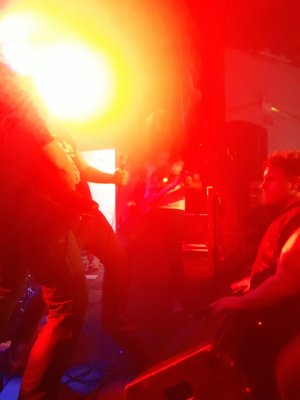 Perhaps surprisingly the Killing Technology album from 1987 featured most heavily this evening, represented by three tracks which underlined the heaviness of the set. They took no prisoners and played a storm, singer Snake prowling the front of the stage. His voice has taken on a growlier characteristic with age and he has great presence, making for an engaging frontman who sometimes has a touch of an extreme metal Ozzy about him. It’s a good natured evening with lots of chat with the audience and many laughs, each of the band members getting introductions based on their nicknames. Before The Prow we even got some Saturday Night Fever and a snatch of the theme from the TV version of The Hitchhiker’s Guide to the Galaxy courtesy of Chewy, resplendent in a Cardiacs shirt. We had Snake with a towel round his head in his finest reptilian glory and Rocky strutting to the theme from a certain Stallone movie.

My abiding memory is watching Away, lost in the moment, never missing a beat, adding the perpetual drive that makes Voivod’s music so intoxicating, and clearly loving it all. He’s a fascinating musician to watch and I was mesmerised, a stunning performance. Chewy was imperious, reeling off fantastically dissonant riffs with effortless ease and astounding with the range of techniques deployed. Nailing it all down was Rocky’s elastic bass, sproinging around and seemingly everywhere. They seemed to be thoroughly enjoying their evening, much fist pumping and hand clasping with the front rows as the crowd lapped it up. A couple of songs from The Wake were featured and they come across very well in a live setting with bludgeoning versions of Obsolete Beings and Always Moving, fitting in well as the band cover a lot of ground from throughout their illustrious career. Dimension Hatröss, Nothingface and The Outer Limits all feature, but ending the set we got a ripping version of the first track from the first album the band released, 1984’s War and Pain. 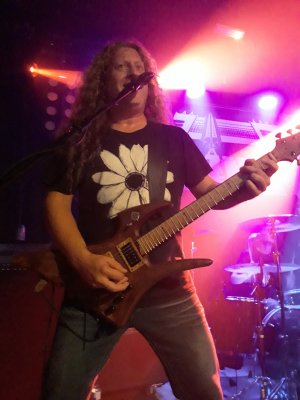 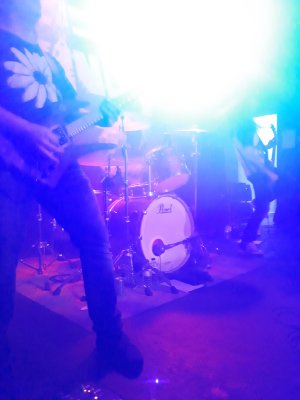 A fantastic night and Voivod didn’t disappoint in any way. They still have the hunger and effortlessly put on a brilliant show. There’ll always be a place for them in my listening as many of the other heavy bands of my youth no longer hold much interest. 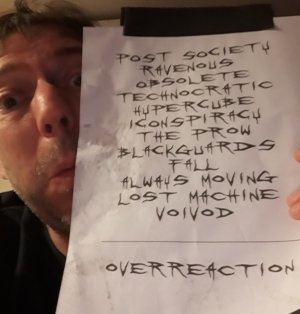 And thanks to Rocky for the setlist!