Just preceding the time that post-punk was leading hitherto musically hidebound yoof into unchartered waters, courtesy of the wildly imaginative Public Image Ltd and all who sailed in its glorious deconstructivist atonal wake, one of the bands that no doubt inspired Mr Lydon’s new troupe was teetering on the brink of dissolution thanks to a disinterested music industry and the inevitable realisation that an adherence to radical-left European politics wasn’t winning them any friends in the biz. Henry Cow was that band, and in an inspired move they started the ‘Rock In Opposition’ movement with like-minded musical outcasts on the other side of La Manche in order to pool resources and ideas, and no doubt to put the world to rights over eye-wateringly strong cups of espresso.

The original five bands held a now famous concert in London in March 1978 that gave official birth to the RIO movement, and just over a year later a second concert was organised by the Italian band Stormy Six, by which time the Cow had split up, and the remaining original four bands were joined by three more iconoclastic noise makers, one of whom was Art Zoyd, a French collective with a uniquely inspired outlook, arriving on the same Gallic spacecraft that delivered Univers Zero and Magma to us mere Earthlings.

Typical of French culture, Art Zoyd are fiercely independent of the Anglo-centric world, and I had to smile when tapping the Union flag on their website merely translated the page header from “Home > Histoire” to “Home > History”, the text stubbornly remaining in French. Luckily however, Cuneiform have provided an informative press release, which tells us that the band formed in 1969 and that “Art Zoyd has always been a band in flux, not only stylistically but in terms of personnel as well. Countless musicians have come and gone through the band’s ranks over the years, but most of them can be heard here, with core players like bassist/cellist Thierry Zaboitzeff, trumpeter Jean-Pierre Soarez, keyboardist Patricia Dallio, and violinist/keyboardist Gérard Hourbette providing the through-line.”

The box is called 44 ½ after the Birthday Concert at the 2015 Rock In Opposition festival in Cap Decouverte, France, and within its unprepossessing yet magnetically attractive confines are 12 CDs and 2 DVDs covering dozens of concert performances from as early as 1972 right up to the 2015 birthday bash, and a sumptuous 52-page book, and two posters. The music contained therein covers all aspects of the band’s wide-ranging explorations on the fringes of modern music making.

This sprawling collection, like the band’s music, is a thing of atramentous, unclassifiable beauty possessed of an incalculable innate mass. The music one encounters, having turned the lights down low and lit the black candles, moves without constraint across modern classical, filmscore, avant electronica and free jazz, flirting with dissonance and tribal rhythm, combining and separating at will as it creates its own vast space. For example, the twenty two-minute A Drum A Drum is a physical manifestation of black light hidden within a broiling mass of electronica and filmic symphonic grandiosity that comes into and out of focus over an insistent pulsebeat, punctuated by maniacal cackles and guttural impressionistic narration, to climax in a jerky percussive dance inside an echoing cavern. Ending with a chamber orchestra perched on the edge of an abyss, and the singer declaiming something unutterable, this is the ultimate in anti-meditative music, and it is very, very dark in here.

The preceding track on our review sampler 44 1​/​2 at a Glance: Selections from the Art Zoyd Box Set marries free jazz saxophone, musique concrète and Zeuhl piano heft over an insistent but subtle rhythm that sounds not unlike several clocks ticking in almost-unison. This music is challenging, for sure, but it is also considered and well thought out, and not in the slightest angularity for the sake of it, as I have heard some loftily and mistakenly dismiss avant-garde music making.

A Drum A Drum is a classic example of how Art Zoyd deconstruct the building blocks of music, along with the listener’s preconceptions, only to rebuild the music in unexpected, and to this set of untrained ears, sometimes incomprehensible ways. However it all sounds glorious to me, and that’s what matters! The only drawback, if that’s what it is, to this kind of thing is that this is not music you can listen to casually on the commute to work, or while out jogging. No, this is music that needs – deserves – to be sat down in front of and listened to on a decent hi-fi system in order for the listener to get the maximum return. Just listen to the steam engine symphony on Noces Accidentelles cleverly recreated by an orchestra, for example. In this time-pressured world of shortening attention spans, taking time out to sit down and listen is sadly a practice that is becoming ever rarer as my generation become inevitably less in number, not to mention hearing capability.

This box set is lovingly assembled, and more info can be found about that aspect by following the Cuneiform Records link below. Obviously, the cost of the box set is going to be beyond the wallets of a fair proportion of the audience likely to buy it, so Cuneiform have thoughtfully made the sampler I am reviewing from available for $5 (a snip!), or you can buy each of the 12 CDs in the set separately on Bandcamp in download form for $8 each.

As you are probably aware Cuneiform Records announced that due to mounting commercial pressures making the running of a conventional record label untenable, that it was putting itself on hiatus for 2018 in order to search for a viable way of running a specialist interest outlet in the unforgiving modern music biz environment. This was a sad but also sadly inevitable announcement. One hopes that the cost of putting this marvellous set together was not the straw that did for the camel. This particular dromedary has been releasing weird and wonderful sounds for decades, making Cuneiform’s hopefully only temporary demise all the more poignant.

There will always be those making music on the fringes, but with fewer and fewer ways of making itself known to a potential wider audience beyond self-publicity, one wonders what the future holds. The grip of the streaming giants is slowly but surely killing off everything that doesn’t fit into its cosy homogenised auto-tuned mainstream world, and we are all to blame, even those of us who refuse to pay subscriptions to these grasping devils. Every time you play a YouTube video, or a hit a free Spotify link, you and I are contributing to this decline. This is why the likes of Bandcamp are so important, as they are the only outlets where a fringe artist sees a decent return for their efforts.

Where am I going with this? I wish I knew, but sometimes I feel like my colleagues in the non-mainstream pond, those who write about it, or simply listen to it are all sailing on a metaphorical Titanic, and we’ve already hit the iceberg. I wish I knew the answer, or where the lifeboats were, but in the meantime, I will hit “Play” again on this magnificent feat of creativity called 44 ½.

PoOSTSCRIPT: Since publication the following has been received from Steve Feigenbaum of Cuneiform Records:

“I would just like to publicly state here and hope that this is passed on to readers of this article, that releasing the Art Zoyd box had nothing to do with my decision to downsize and take time off to reflect if and how there is a way forward for Cuneiform. I’m really happy with this box, really proud of it and it did better than I expected financially, so this decision has everything to do with the general trajectory of the value of recorded music over the last decade and nothing to do with any particular release.
Thanks for your attention.
Steve Feigenbaum, aka Mr Cuneiform” 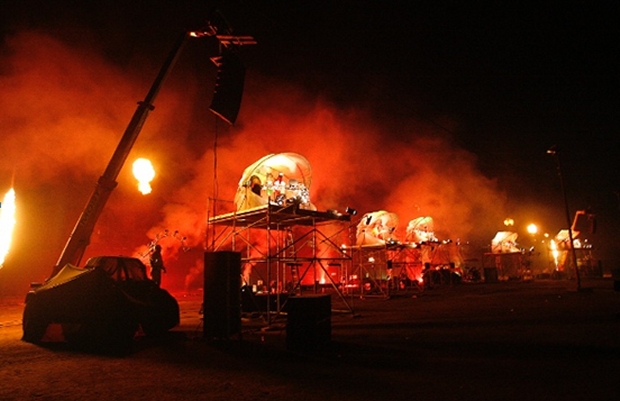