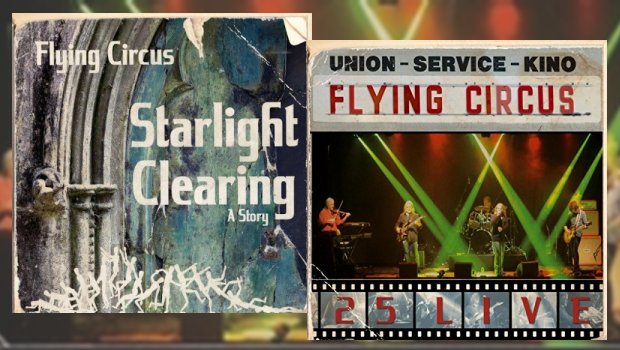 And now for something completely different…

At first, it struck me as odd that a German band would use a reference to World War II to begin their album, but now I can’t help grinning when I hear the above bulletin, as I know a fantastic set of tracks is about to unfold before my ears.

Flying Circus might just be Germany’s best-kept prog secret. Despite having been active for over a quarter of a century, they still have no place on progarchives.com. Their name, coinciding with the popular ’70s British comic troupe, makes them a little difficult to Google, but tacking on “prog band” and “Germany” helps. With only a few band line-up changes, their core has remained the same since the beginning.

Opener The Promise is a great symphonic neo-prog offering, with a bombastic intro that gives way to a fiercely infectious verse and chorus section, all with an abundance of head bopping odd time signatures. We are introduced to the dulcet tones of Flying Circus’s charismatic founding singer Michael Dorp, whose slightly accented English vocals bear more than a passing resemblance to Rush man Geddy Lee’s. He is certainly capable of hitting the high notes, but also performs well when adding a bit of grit and gruffness to his normally clean vocals. While his vocals might not be to everyone’s taste, he is a key part of the band’s sound and a good one at that.

The first track might worry you into thinking that the album will be shamelessly neo-prog in content, but the subsequent tracks prove otherwise, showing that the band are capable of tapping into a full range of genres, and tackling them with ease and panache. More than One is one of the grooviest tracks in 7/4 I’ve ever heard (besides perhaps Chris Squire’s Lucky Seven?) and features a show-stoppingly excellent, almost avant-garde jazz piano break by Rüdiger Blömer. This was the point I knew I had struck gold.

The band fully shifts gear once again for the next track Merchant Navy Blues, exercising some restraint by simply playing a great blues-rock track although still adding a couple of technical flashes in the bridge. Easy à la prog you might say. The chorus, a repeated mantra of “Can’t get me down”, is so singable, it’ll be in your head for weeks.

Not content to stay in one box for too long, the band jump into hard rock mode in No Way Back, and Blömer shows his chops on his second instrument, the violin. Oddly for a prog album, the longest track, Your Liege Forever, is just over six and a half minutes long, proving that Flying Circus have mastered short-form prog writing, something quite a few bands struggle with. In this case, the longest track happens to be one of the best, a masterclass in dynamic shift. Starting with acoustic guitar and flutes in a Stairway to Heaven vain, the song gradually adds more elements with such beautiful grace that you can hardly realise how astonishing it is when you reach the crescendo at the end of the song. That’s a bit like Stairway to Heaven too, isn’t it?

It is here that the album reaches a crisis. With such strong material fronting the album, it was wishful thinking hoping the rest of the album would be just as good. Somehow, it simply isn’t. It’s still very enjoyable, and the playing is just as tight and interesting, but none of the remaining eleven tracks has the X-factor (I’d like to requisition that phrase from Simon Cowell) that the first five did. The fact that four of these five tracks are played on the accompanying live DVD only serves to boost the feeling that these are the “important” tracks. More on the DVD later.

The further we delve into the album, the more the “concept” about a struggling 1960s psychedelic artist in London named Peter Barren is revealed. That’s right ladies and gentlemen, this is, in fact, a concept album, something that is nearly impossible to pick up on from the lyrics, which seem to bear very little relation to any plot. However, I kind of like it that way, as it was Dream Theater’s The Astonishing that proved that less is more when it comes to blending a story with music.

We hear the track Voices in the Rain (also featured on the live DVD) followed by a Zappa-esque voice over on Turning Tides, letting the listener know they’ve just heard a song off the fictional band Starlight Clearing’s debut album. Now you see where the album name comes in. Aaah! More hints that this is indeed a concept album come in the form of The Getaway, an aptly fast-paced track that features its own 14-second reprise a few tracks later.

I was very shocked by the end of the album, expecting it to be similar to the bombastic opening track. Instead, Lost in Forests turns out to be a very quiet, melancholic and even experimental track, concluding with a minute of musique concrète, quite the opposite to the start of the album. You would think you were listening to two different bands if you compared these two tracks. While this may have something to do with the story, which I haven’t fully fathomed, it just seems the wrong sort of ending for this kind of album.

If you have a bit of extra cash on you, you can shell out for the three-disc edition of this album, which appends a live CD and DVD of the band’s 25th anniversary concert in Elsdorf, Germany. I would recommend this as it is wonderful to see the band live and the on stage presence of each member. Dorp is clearly a passionate singer and frontman, but it’s interesting to hear him introduce each song in German before singing in perfect English. Roger Weitz is a stalwart bassist, not always playing the most interesting licks, but a solid pillar supporting the rest of the band. Surprisingly, Michael Rick, the guitarist, seems to have the least stage presence, and the spotlight is rarely on him. Blömer is an excellent keyboardist, and watching him play More than One live is thrilling. And last but not least, Ande Roderigo is simply a perfect fit as a drummer, complementing Weitz in the rhythm section and performing each fill effortlessly.

The DVD is also a great introduction to the group’s back catalogue, with track names introducing each song, including the album it appeared on, and the year that album was produced. Besides the highlights from Starlight Clearing, my favourite track is the tight prog track Living a Lie from their 2000 album Out of the Waste Land, featuring speedy Peart-like drums and an inventive a capella section of the full band clapping! While the 84-minute video itself is excellent, I feel like the production of the DVD is shoddy and rushed, as the song selection menu has multiple spelling errors, including not capitalising song titles e.g. “you leage forever” instead of Your Liege Forever and “Blues” instead of Merchant Navy Blues. Even worse, some of the song titles are missing from the selection screen altogether, and have to be fast-forwarded to in the video, if you can even remember where the song was. It also took a few inserts for my computer to recognise the live CD properly, which is never a good sign of quality.

For their faults, Flying Circus have managed to create at least half of a truly fantastic album, with several tracks that I will keep returning to, and hopefully I’ll see the light and enjoy the others later. In the CD age I do think some albums are a bit too long for their own good, and at over an hour, this album is too much to swallow as a whole. The band themselves are a very tight unit with an abundance of skill and technique, and I am in admiration of the way in which they tackle so many different genres on just one disc, all the while sounding like themselves.