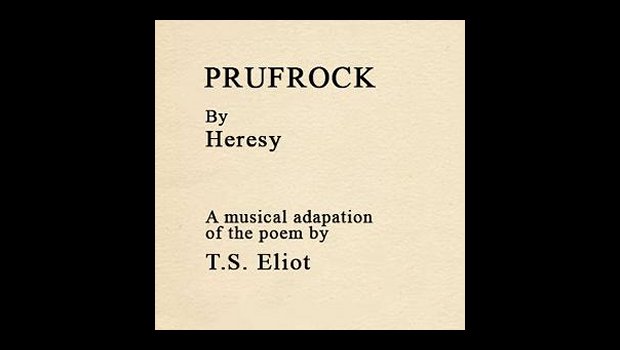 Heresy – Prufrock: A Musical Adaptation of the Poem by T.S. Eliot

“Alfred J. Prufrock would be proud of me”, declared Welsh Indie rockers Manic Street Preachers in 2001 on their song My Guernica. Musical adaptations or references to the works of T.S. Eliot in modern music have an interesting and sometimes chequered history, lest we forget Andrew Lloyd Webber’s Cats! The American progressive rock group Heresy follow in the footsteps of a variety of artists as varied as Hot Chip, Tori Amos, The Cocteau Twins, Frank Turner, Crash Test Dummies and Arcade Fire whom have all touched on that great poet in their work, even if only fleetingly. Bowie’s Low and PJ Harvey’s Let England Shake are also said to have been greatly influenced by Eliot’s poetic style. Even Bob Dylan referred to T.S. Eliot in his epic song Desolation Row, released shortly after Eliot’s death in 1965. The most obvious and notable example of a Progressive Rock band delving into the world of T.S. Eliot is Genesis’ classic Cinema Show, from Selling England by the Pound, which ‘borrows’ significantly from a section of The Wasteland. Therefore, Heresy are stepping simultaneously on hallowed ground previously trodden by Prog greats, whilst also tackling a classic of English literature.

Eliot’s The Love Song of J. Alfred Prufrock may seem a curious choice upon which to base a rock album. If you were to ask most men and women in the street what they knew about Eliot it is probable (if they even knew he was a poet!) that the poem that they would name would be The Wasteland. So what is remarkable about this relatively lesser known work, his first published poem in 1915? Literary critics now regard it as particularly significant, marking the change from Victorian Romantic verse into Modernist ‘streams of consciousness’, though some critics at the time entirely dismissed it. The poem deals with feelings of physical and mental inertia, with a sense of disillusionment about his human condition. Touching on regret, fatigue, embarrassment, sexual frustration and a growing sense of mortality, an interior monologue presented in a modern and dramatic way not previously seen in poetry. It was written shortly after the Edwardian era, giving it a tension between its modern mode of expression in a time of more mannered Romantic poetry. Therefore, in that context it would appear that this poem provides fertile if challenging grounds upon which to base an albeit idiosyncratic concept album.

Do Heresy pull it off? The short answer is most decidedly – ‘Yes’.

Heresy clearly have a great respect and love for this source material and present it in a complementary way that engages the listener, drawing them into the anguished internal world of the protagonist. Apparently, Heresy have been considering setting this poem to music since before the release of their first album, At the Door in 1984. From the late ’80s the band went on an extended hiatus (presumably when ‘real life’ had to happen!), therefore this album has been gestating for over 30 years, which may explain the remarkable maturity with which it is presented.

The Italian radio dialogue of intro Dante’s Prelude is a reference to the apparent influence of Dante upon the structure of the poem. The music begins on Let Us Go with a lovely solo vocal of great quality and purity by Tony Garone, which is then accompanied by a subtle acoustic guitar and piano. The song develops gently with the refrain (which is a strange but real ‘ear worm’):

“In the Room the Women Come and Go, talking of Michelangelo.”

This refrain is then echoed at the beginning of Yellow Fog, with a delightful female harmony vocal by Andrea Ezekian, before the song flowers over a lovely guitar melody, akin to the band Renaissance at their best. Yellow Fog is a real highlight of the album with another male vocalist, presumably Scott Harris, singing with great emotion and clarity. The song builds with multi-layered vocals and even trumpet and flute before a flowing restrained guitar motif at its zenith takes us to the end. The opening triptych of outstanding songs is completed by Time, with Joe Meo on flute and some nice bass work from John Sergio, before the piece develops with subtle touches of trumpet over a piano led melody and string sounds. Another restrained guitar solo serves to punctuate the piece rather than dominate it. Similarly, a brief manic violin interjection by Alan Lin adds colour before we return to the ‘Michelangelo’ refrain to close the song. This opening trio of songs sets the bar very high for the rest of the album, and should be successful in drawing in the listener.

Night Vigil is a section of the poem that was previously lost and was only added to the poem posthumously after Eliot’s death. This is altogether darker and more sinister, as reflected in a very different tone of the music, with anguished vocals and an appropriately carnal sounding saxophone. I Was Afraid opens with strange xylophone sounds and keyboards introducing a strong vocal before expanding with guitars, violin and organ. The stabs of saxophone and folk-type vocals have echoes of A Passion Play by Jethro Tull.

Heresy sensitively reflect the variations in the tone of the poem as they skilfully change the atmosphere and instrumentation of the different sections, whether it is short quiet piano led interludes or more dramatic pieces. Worthwhile II provides an achingly melancholic reflection of piano and violin with suitably angst ridden male vocals, counterpointed by an emotional female voice. In contrast Prince Hamlet commences with Sergio on mandolin, with a flute interweaving through the song over a flowing keyboard foundation by Harris. Jaquin Lievano lays down a flowing guitar part, but like so much of the album this is subtle and only as long as it needs to be – serving the song rather than taking the main focus. Mermaids is a weaker song, and veers towards ‘easy listening’ territory, but it would be difficult to completely sustain the very high quality established at the beginning of the album. The album proper concludes with great quality in Chambers of the Sea, underpinned by some tasteful drumming from Chris Camilleri and Jason Brower. This piece is an undoubted highlight of the album as guitars and keyboards build with the drums under the chilling repeated refrain;

“‘Til human voices wake us and we drown.”

A frantic finale ensues with guitars, discordant saxophone and trumpet interplay in a manic conclusion, with echoes of Van der Graaf Generator.

In a song which feels like a soothing coda We Watch the Stars, from Tony Garone’s solo album Too Little, Too Late, serves to pacify after the storm of the final ‘Prufrock’ song. However, a further six additional songs taken from Heresy’s first album feel like unnecessary ‘filler’ and, frankly, do not add anything to the album.

Prufrock is an ambitious and imaginative album. In some ways it sounds very ‘English’, which may seem odd for a band from the U.S., however this is apt as T.S. Eliott grew up in America before moving to Britain in his twenties, staying for the rest of his life. During an interview in 1959, Eliot said of his nationality and its role in his work: “I’d say that my poetry has obviously more in common with my distinguished contemporaries in America than with anything written in my generation in England… It’s a combination of things. But in its sources, in its emotional springs, it comes from America.”

Similarly, it may have needed an American band to interpret his work so sensitively, conveying the tension between the English post-Edwardian atmosphere in which the protagonist is conversely undergoing a very modern internal monologue full of anguish and doubt. Heresy have pulled off a fascinating album in which each individual section of the poem is expressed very distinctively through music, but they are very much integral to a cohesive whole.

One of the more unusual releases, but it certainly helped to encourage me to discover more of the poetry of T.S. Eliot. The music and the poetry are inextricably entwined, but it also works just fine as a progressive rock album of subtlety, variety and imagination.

T.S. Eliot wrote in this poem; “And would it have been worth it, after all…”, and whilst the poem casts doubt on the answer to that existential question it does seem fair to say that as an album Prufrock is definitely worth it!