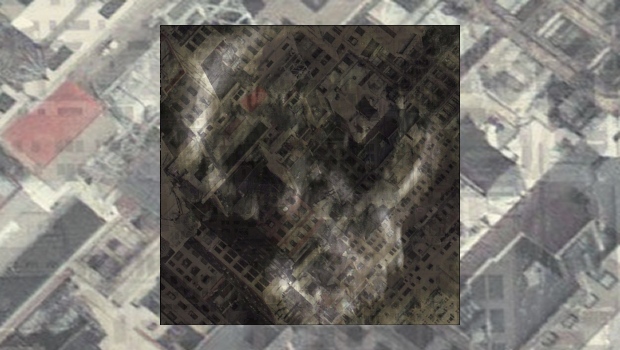 Jack O’The Clock – Repetitions of The Old City – I

If you have never entered the alluring soundworld of American band Jack O’The Clock then you are in for a treat. Musical polymath Damon Waitkus has led his Americana-infused chamber pop orchestra through all manner of changes over the years to arrive at Repetitions of The Old City – I, a thoroughly absorbing tour through his occasionally homely and always slightly off-kilter imagination that for just over an hour transports the listener into a world viewed through the dust haze of future-as-nostalgia.

The music is multi-layered and full of subtle complexity that serves to emphasise rather than downplay the human element. This music has bags of soul. Snatches of Latino rhythm mix with surreal Beatles-esque filmscore, chamber pop and finger-poppin’ singing in the rain, and that’s just on Fighting the Doughboy, an acoustic chamber symphony Kick Out The Jams for the all too self-aware, and for me the album highlight. Each time I listen to this mini-epic something new is revealed. Elsewhere, snatches of old English folk music mix it up with Damon’s individual and always involving take on Americana, which together with his knack for storytelling make for a highly satisfying listen that will have you hitting “Play” again, the second it stops.

Driving all this is a wide variety of instrumentation, and with Damon and his bandmates’ penchant for the exotic end of acoustic noise making, namely hammered dulcimer, guzheng, zither, and pianet, the sound symphony is beguilingly different. A hammered dulcimer is akin to zither on a tabletop, played with mallets, and a guzheng is a millennia-old Chinese zither, and it seems with the addition of the European version we have something of a zither orchestra, with lead lines taken by violin or reed instruments. With bulky instruments like those mentioned one can only imagine that touring any distance is somewhat problematic, which is a shame for those of us thousands of miles away. There is always something interesting going on, you will not find yourself drifting off while listening to the beautiful end product of Damon’s restless imagination.

I mentioned storytelling, which leads neatly into the lyrics. Some folk claim they place little importance in lyrical content when listening to music, but methinks they are doing not just the songwriter but themselves a disservice by taking that attitude. Why buy a jam doughnut but not eat the jam? Of course, some songwriters are better at the crafting of lyrics than others, and Damon ranks up there with the best.

Damon gave a highly interesting interview with podcaster Ian Beabout that I would recommend you listen to if you want intimate detail as to the meaning of the album and its lyrics. Suffice to say, Damon’s rarefied explanations belie a fierce intellect. Summarising, I am drawn to conclude that the “City” of the album title is the city of the mind on one level and societal inter-reaction on another, and the connections made over a lifetime, the “Repetition” being the cycle of life, death, and renewal, and facing up to and moving on from the past.

As with all great lyrics, Damon’s are not literal and could have a number of interpretations. Opening track So Glad To Meet You, a short introduction sung in the round to an eerily quiet electronica soundtrack could prove to be a love song, as the melancholy of one protagonist is rescued by the other. “You I didn’t plan for, you I can’t resist” seems about as straightforward as it gets. However, a line like “‘Leave me alone!’ he snarls. ‘I’m building you a spine.’” is an altogether different proposition. Elsewhere, old men contemplating failure, death and loss, childhood conditioning, railing against the unfair privilege of the entitled, and songs about guns and baseball fire one’s synapses as we travel through Damon’s strange world. Heck, there’s even a song called Epistemology! If the sum of your lyrical appreciation is akin to “Done the rancher’s daughter, now I need some place to hide”, you will struggle with this. In places the oblique nature of some of these lyrics puts me in mind of Michael Stipe at his best.

A mention must be made of the rhythm section. As well as chipping in with marimba and vibraphone Jordan Glenn’s subtle drumming is the perfect complement to Jason Hoopes’ sinuous bass lines, the two creating an effortless backdrop for the entwined complexities that dance their merry dance on top.

Jack O’The Clock have arrived at a highly distinctive sound that seems to fit into a current zeitgeist that this side of the Pond sees the likes of North Sea Radio Orchestra and Firefly Burning, and, from the louder end of the stage, Knifeworld together forging a new progressive path that is a new folk music for troubled times. Oh, and Repetitions… sounds drop dead gorgeous by the way, Damon knows how to twiddle those knobs, a seemingly increasingly rare and sadly under-appreciated talent these days.

Put simply if you have a penchant for the new routes being carved by those bands I mentioned and others, then you need to buy this fascinating album. As its title implies, there is a “II” on the way. I can’t wait!