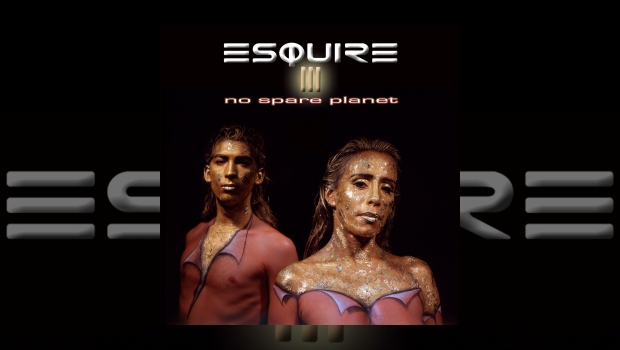 The existence of No Spare Planet, the third studio album from collaborators Nikki Squire and Nigel McLaren, is a bitter sweet experience. On the one hand it marks the triumphant return of Esquire nearly twenty years after the release of Coming Home with a recording which is thoroughly captivating and hugely enjoyable. On the other hand it stands as a tragic reminder of and tribute to the unspeakably sad and untimely death of Nigel from a stroke in June 2015.

That the album exists at all is a moving testament to the passionate dedication of Nikki Squire to honouring the highly creative and profoundly inventive musical relationship they shared over the course of 30 years. Although the groundwork for the songs had been in preparation for a few years, the pair had been building momentum in trying to bring it all together for Esquire III. Unfortunately Nigel would never see the project come to completion and Nikki, with the assistance of producer Mark Wallis, was left to complete the album alone.

No Spare Planet is a stirring celebration of progressive music which quite unapologetically embraces a wide and eclectic variety of modern influences. The style may be unconventional and even unorthodox but the willingness to dabble and experiment brings with it a freshness and an immediacy which is a poignant reflection of the imaginative and encompassing vision the two collaborators bring to the album.

Although the songs span a wide spectrum and range of moods, emotions, rhythms and tempos they are, without fail, startlingly bright, instantly accessible and warmly welcoming. There is a joyful exuberance which combines with strong, positive song writing that is not afraid to express or indulge itself in musical flourishes and stylistic extravagances where warranted. It is an album which instantly strikes you as having a beautifully strong yet gently defined sense of purpose and direction which sparkles with vitality and spirit.

Such an impression is reinforced by the richly distinctive and powerfully striking vocals of Nikki Squire. Her voice conveys a remarkable and dynamic range of emotions, thoughts and feelings around which the instrumental work ebbs and flows, rises and falls to create an exciting and often innovative set of soundscapes. Throughout the album these are further enhanced by the creation of uplifting harmonies and delicate melodies, contrasted in one song, Stay Low, by the light innocence of an accompanying children’s choir.

But the voice itself is often used as one texture among many. In places the album draws on styles and influences emerging from keyboard driven electronica and even disco to straddle boundaries in original and ingenious ways to tell stories through the songs that carry simple, direct messages. Human Rhythm is a richly melodic, foot-stomping, body swaying experience with clear echoes of the way the Electric Light Orchestra and bands of the early ’80s used a bedrock of keyboards to drive a bouncing rhythm full of energy and life.

And I think the stories being told on this album are what really lift No Spare Planet above the normal and the ordinary and mark it out as something special. You cannot but be impressed by song writing which is, at times, painfully honest and movingly meaningful. Care and affection have clearly gone in to the construction of songs which carry a simple and effective message, or story, or tale and which do so in ways that are emotional, touching, compelling and forceful. The writing achieves an inventive fusion and potent integration of music and message.

No Spare Planet is a bold, energetic and spirited record which stands as a fitting tribute to a lasting relationship which brims with potent creativity and a burning zeal to make music which was so clearly a labour of love to create as well as being, for us, a delight to hear, experience and enjoy. It is a monument to the irreplaceable loss Nigel McLaren’s passing means for this particular project but also, I believe, a beacon of inspiration for the musical future I sincerely hope Nikki Squire will continue to enjoy and explore.