One of the drawbacks to being a progressive rock fan that lives in the United States is how few bands get the opportunity to tour here. Since most of the bands are from Europe and all of the major festivals happen over there we usually only get to see the bigger bands perform live. So when an up and coming act like Haken come through Los Angeles it’s an event not to be missed.

The location acquired for the show left a lot to be desired. The Complex is a tiny dive bar in the Los Angeles suburb of Glendale with a maximum capacity of just under 200. The show sold out within the first 3 days and it’s obvious a larger venue should have been chosen. The claustrophobic confines of the club were pushed to the max (the doorman confirmed they had gone over capacity) and the whole place turned into a sauna within the first hour. But none of that mattered, nobody was complaining, not with the night of music we were being treated to.

I was really excited to see this concert. Haken was a band that I initially didn’t connect with, but that changed when they released The Mountain back in 2013. Their current release, Affinity, solidified my appreciation. I was also thrilled that they chose the eclectic Thank You Scientist from New Jersey as the opening act. I’ve been playing their new album Stranger Heads Prevail frequently over the past couple months and was eager to see them perform.

I’m happy to report that Thank You Scientist are even more impressively gonzo in person than they are on record. Their instrumentation alone sets them apart from many modern Prog acts. Instead of a keyboardist they have filled that role with a full-time violinist, a trumpet player and a saxophonist. This creates a unique palette of sounds they can draw from and allows them to blend jazz elements organically into their sound. But don’t worry, you don’t have to be a jazz aficionado to appreciate them, their material is so fun, so playfully energetic that it’s extremely accessible. 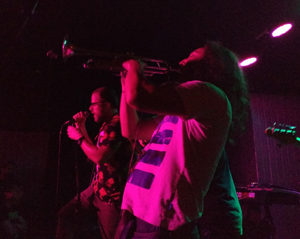 Vocalist Salvatore Marrano is an excellent frontman and he got the crowed whipped into a frenzy from the opening song. His vocals are just as clear, distinctive and soulful in a live context as they are on the album, he has a formidable talent and the personality to sell it. The band was locked in tightly throughout their set performing selections that leaned heavily on Stranger Heads Prevail. My favorite track was the instrumental Rube Goldberg Machine which gave the band room to stretch out with impressive solos from each player. They also displayed their sense of humor by transforming Eddie Murphy’s 1985 novelty single Party All The Time into a fusion/funk/prog workout. If you get the opportunity to see this band perform, I highly recommend it.

Haken began their performance with keyboardist Diego Tejeida recreating the affinity.exe intro and then the full band launched into the uptempo Initiate, the opening track from Affinity. The polished perfection of their studio albums really had me curious to see whether they could pull off these incredibly complex pieces in a live context, short answer: they can, in fact they surpass them. At the conclusion of the song Ross surveyed the enthusiastic crowd that was threatening to burst the small club at the seams and asked, “How the fuck did they fit all of you in here?”

Of all the impressively technical Prog Metal bands covering the landscape, I think Haken is quite possibly the most fun. No matter how complex the arrangements, they never lose their connection with the audience. This is a genre that tends to lean toward acts that take themselves a little (or a great deal) too seriously. This is a trap Haken ably side-steps with their playful, darkly comic, infectious approach. I would venture a guess these guys spent as much time watching Monty Python as they did listening to Yes albums. 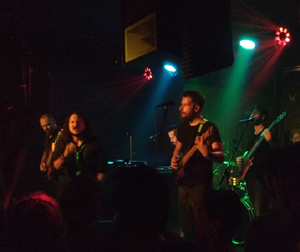 The 100-minute set consisted primarily of material from their two most recent albums; The Mountain and Affinity. Those records have really increased their exposure in the U.S. market and it was obvious the crowd knew every moment of every song. In performance they stick closely to the studio arrangements but do occasionally throw in some new elements including extended introductions for both Earthrise and Cockroach King and a brief keyboard solo that leads into Deathless. While the performance was tightly arranged, it’s never static, the intense power this band can conjure in concert is only hinted at on the studio recordings.

The largest reactions from the crowd came from the two epics 1985 and The Architect and the very popular Cockroach King where the audience nearly drowned out the band singing along with it. Talking with one of the roadies prior to the set he mentioned that Haken had sold out all but three of the nights on their North American tour. Based on the reaction of the audience this won’t be their last U.S. tour and next time they should easily be able to book some much larger venues.

Haken truly deserves the recognition they’ve been getting over the past several years, they are really developing into a unique band that won’t easily fit into any stylistic boxes. I know many of us older Prog fans bemoan the day when our ageing heroes are no longer able to perform, but with the level of talent I saw both Haken and Thank You Scientist display, the future is looking very bright.

I would also like to give a brief mention to local Los Angeles-based fusion band Mammoth, an impressive instrumental power trio that the audience adored. Their new album, Deviations, has just been released and is worthy of your attention.