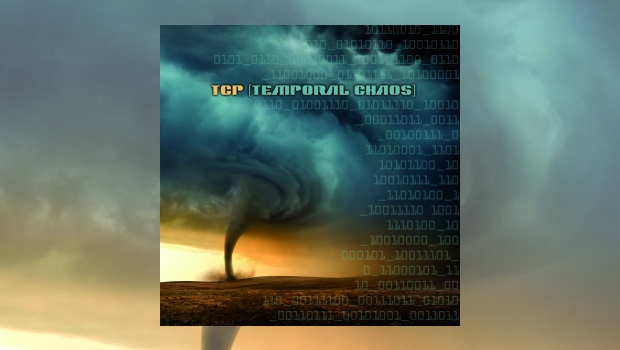 One of the highlights and surprise albums to come out of the slow US economic melt of 2011 was Temporal Chaos Project’s (TCP) Fantastic Dreamer which became one of my favourites of that year. It was also a critic’s favourite with several glowing reviews, which can be read on the band’s website. The inspirational and near 14-minute closer, Vision, was my favourite song for a number of years after the album’s release and I also sought out their first album, The Way, which is another simply stellar recording.

So without hesitation I requested a review copy of their new album, Temporal Chaos, once general release had been announced for 12th July.

TCP’s Blake Tobias hails from Johnstown, Colorado and mixed the album at Black Duck Studio, just north-east of Dan Fogelberg’s Nederland, and the Caribou Ranch. Just for reference, the cover for Supertramp’s, Even in the Quietest Moment was shot at Eldora Mountain Resort, an hour or so to the west, so some of the inspiration for Temporal Chaos comes from the perspective of a musician who lives and breathes in some pretty spectacular surroundings with mile high altitude…and attitude.

As well as Tobias on bass and keys, TCP is made up of Jack Wright (guitars & drums), Glenn Arpino (keyboards) and Henry Tarnecky (vocals & keys) with special guests Nicole Tarnecky (Henry’s daughter) on backing vocals and Tom Shiben on bass.

When you take a number of years off, which many part–time bands have to do, you need a re-introduction so the album’s title and a couple of the tracks take care of that historical perspective. The musical direction has not changed, nor has the group’s ability to perform at levels which few part–time bands can. The time spent perfecting and testing the tracks can immediately be recognized by fans or new listeners. TCP takes its music seriously, but enjoys the music making process and does not feel pressured from a label or business standpoint. The band get together because of their love for the art of music and creating something lasting. It is an expression of passion. The band’s name kind of sums up that experience:-

Temporal: “Relating to worldly as opposed to spiritual affairs; secular. Of or relating to time”.
Chaos: “complete disorder and confusion”.

Now, if this is your first listen to TCP then you are in for a wonderful treat, especially if you are a fan of Peter Gabriel era Genesis. Henry Tarnecky’s vocals are an excellent combination of Gabriel, Marillion’s Fish and Peter Nicholls from IQ. On this album of re-introduction, Tarnecky’s vocals have a crisp and rough Gabriel Melt album sound, at times sounding so much like Watcher of the Skies that you will swear that it is actually Gabriel singing.

Opener Torn Apart 1000 Sparks sounds like the musical equivalent of the cover artwork; a visual tornado spinning out of control across the Colorado prairie. Deep bass, whirling with delicate keyboards and short, high, electric guitar chords reach beyond to help create literal Temporal Chaos, Henry lighting the flame with his vocal:-

The burning wall of wind builds fury and power as the rhythm section and innovative lead guitar pierce the sky. All Hell breaks loose. After living three years on the Aurora plains of Denver, I know the storms of which they speak. Much better than the opening of Fantastic Dreamer, an over three minute blast-off. Ready for more!

Forest of Lovelies will take you back to some of the best of prog – Genesis, Marillion, IQ – before the dark slide down. An immediate favourite, the imagery and sounds are perfect with opening keys like something out of a dream from Trick of the Tail.  The lyrics are excellent, drawing the listener into the story like magic:-

“…And thoughts will fly higher till the earth brings them down
Tightening in my face…is that all important road.
Nod if you’re going…with calm simple knowing
Smile if you feel it…resolve if you don’t”

“If you’ve got time for the forest of lovelies with real deal compassion and childlike trust” maybe offers a tip of the hat to the imagery of The Lamb Lies Down on Broadway. Then, as if the excellent lyrics aren’t enough, the band executes a powerful instrumental jam, complete with those Trick of the Tail high keys. Almost nine minutes of bliss after the thundering hurricane opener.

Impetus is a deeper plunge into being and self. The genius of Glen Arpino is that he is able to combine the best of Tony Banks, Martin Orford and Mark Kelly, whilst at the same time bringing his own innovative approach. You can almost imagine Arpino playing those keys on the Supertramp piano at Eldora Mountain. Impetus inspires memories of the sounds from the pinnacle of IQ’s success with albums such as The Seventh House and Dark Matter. Impetus is a powerful track full of excellent musicianship, the driving force helping to shape it being Jack Wright’s inspirational lead guitar that will take you back to Anthony Phillips more than Steve Hackett. Tarnecky opens the lyrics, with vocal support from his daughter Nicole:-

“What drives you hard and rolls you out of bed, she said?
What takes your breath away she gently said?”

“The worm will turn and you’ll be back again.
Just when that thought occurs you reach the end”

“Little house along the shore
Beautiful with yellow door.
All of this what was before
Every human knows there’s more.”

A brilliant painting of words set to elegant music. And we’re only 3 minutes into a near 10-minute epic. The keys take over, piano substituting for drums to keep the rhythm. The powerful sequel to Vision? Maybe. Nicole sings, “Relax your mind…you’re free”. Free to enjoy the band’s instrumental prowess. “I come to crystalize the thoughts that run behind your eyes” – sit back and enjoy this ride into bliss. I won’t spoil all of the lyrics, some of the best on the album.

After a bass/drums opening to The Forces, Tarnecky sings, “Just say it. It’s easy. You know it. I wonder. How pleasing. The world is you covet. Oh when the forces come to complicate the love we made before. How could you shut the door?” Tobias and Wright weave a web of sound with Arpino’s keys as a landscaped backdrop. Wright’s solo is the best on the album. Tarnecky sings, “Her love was like money. So easy to take. In the garden like ‘Eden’, and I was the snake”. Then the pace quickens, Nicole singing supportive “do, do, do”s with one of those dreamy ’60s/’70s melodies surrounding it. Then Wright is back with beautifully inspired axemanship; long, high, stratospheric soaring. Nice.

“What you know is what you see.
To get a glimpse of what could be.
Just try to love me as I am.
The night is chill and long to walk
I’d rather sit in silent talk…with you.”

Keyboards, drums and bass support the growing instrumental excursion, Henry and Nicole singing duet, then lead guitar takes over in a Genesis/IQ soundscape, enough to bring back memories but at the same time accentuating the difference. Guitar and bass paint landscapes to support the lyrics, Arpinio’s keyboards building a lush impressionistic wall.

“Can you stop your heart if you want to?
Take control of your breathe.
Can you undo and fantasize?”

The cool innovative guitar sets a tone above the keys, bass and drums smashing all around, Arpinio’s work reminds of Keith Emerson. The pressure builds as an instrumental assault waits to explode. Then akin to Gabriel’s Melt, raging hot guitar and drums with deep bass helping to add sonic volume. A crawling king snake of a prog instrumental, mixed with inspired vocals, Tarnecky singing like he is bringing the power from The Lamb… or maybe Mama:-

The mood changes and slows, as deep spacey keyboards blend with bass and charged electric guitar which solos, like a pause during The Lamb or IQ’s Subtereanea, before marching on supported by thick bass and drums to make this epic the longest musically. Tarnecky sings:-

A long guitar solo opens Third Eye Limited, complete with an echoing hold to maintain the full length of the chord. The bass work which follows will raise the hair on your arms, a chilling memory of later Pink Floyd albums. Lead guitar bursts through as Tarnecky sings in Gabriel style:-

“Some people think that they are invincible.
Somebody say that you have no principles.
Nothing to believe within.”

The bass and guitar solos are eerie and cool, many no doubt pick this as their favourite song. “Soul liberty, the will to perceive is third eye limited”; it dazzles for sure.

In the Flame is wonderfully spacey with otherworldly keys. An epic follow up to Vision, it is much more tragic.

“She wandered away before…I lost all I had and more.
Her hunger for life her creed.
She willed her own destiny…in the flame.”

Guitar paints a wonderful melody as the keys set the tone.

“Suffer the world…suffer the pain.
After this winter…I may never love again.”

Tingling keyboards again reminiscent of wonderful music from the past, Tarnecky singing:-

“Whose life…it’s yours or mine.
What truth is ours to find.”

Midway through this 11-minute epic, the fall of rain…and thunder, as gentle guitar blends with soft keys to set the stage for Tarnecky:-

“The rain keeps falling down
The forces all around
Are sensitizing me.”

Then a reassuring “From the water’s edge to the mountain ledge I will play my part and protect your heart…I will cover you” before the strong message:-

“Surrender…no more pretender…open yourself to me.
Shake up…come on and wake up…before the world deceives.”

I will not ruin the ending.

This is an absolutely great follow up to Fantastic Dreamer; although that did have the powerful and inspirationally epic ending of the title track, each song here is stronger. The power has been spread throughout the album, rather than concentrated at the end. Everything I was hoping for and more is here. Get this album and enjoy one of prog’s most innovative bands. Let’s help to make this band full time!