Hawkwind are a band that really need no introduction, but if you’re looking for one, this 5CD boxset ain’t the place to start. Hawkwind – The Flicknife Years (1981 – 1988) is Atomhenge’s rather neat solution to release all of the leftover Flicknife Hawkwind material in one fell swoop. In case all that went over your head, it’s probably worthwhile mentioning that Flicknife is the independent label Hawkwind turned to in the ’80s to commit to record much of their previously unreleased live work and demos. As a band so prolific that they warrant their own reissuing label (Atomhenge, managed by Esoteric Recordings) it’s straightforward to see how Hawkwind may have amassed a lot of these over the previous decade. If you’re the kind of hardcore fan who wants to hear it all, you’ll be delighted by this completist box. 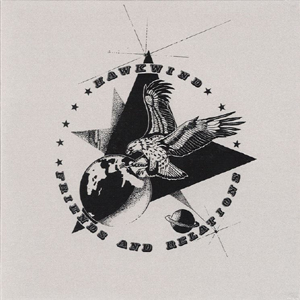 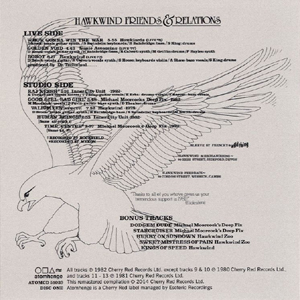 Hawkwind, Friends & Relations kicks off the set with a side of live Hawkwind from ’77 and ’78 followed by a succession of studio tracks by various Hawkwind offshoot bands. Indeed, all three volumes of the Hawkwind, Friends & Relations series follow this structure. While the live side features some solid tracks, the final and best track, Robot, is regrettably and inexplicably cut from its original eight minutes down to six on this version. The studio side on the other hand is truly diverse, ranging from pure sonic pulsation with the Hawklords track Valium Ten to outrageous punkish blasts from Inner City Unit with Raj Neesh. Michael Moorcock’s Deep Fix don’t receive a great introduction with the hellishly amateurish Good Girl, Bad Girl but find something of a redemption in the oddly compelling and rhythmic instrumental Time Centre. The bonus tracks definitely add to this set, with the fun and innovative Dodgem Dude single fast becoming my most played track of all the five discs. And how nice it is to end with a rendition of the first Hawkwind track ever released, Hurry On Sundown. 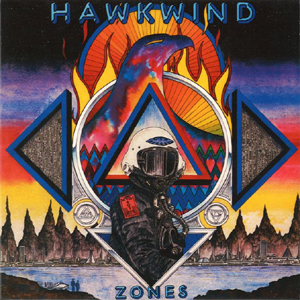 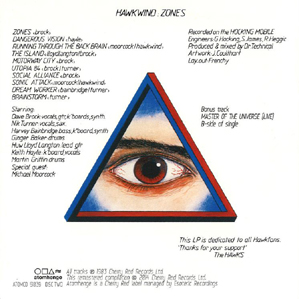 Up next is the demos-and-live-material-showcase Zones, and incredibly, this album is just as striking as its dystopian artwork. Only on a Hawkwind album could you expect to jump to the centre and hear someone say solemnly “… and the streets are paved with hamburgers”. The first half is more than adequate, with many decent jams and guitar workouts to be found. However, the fulfilling half of the album starts with Utopia ’84, the first of several tracks that follows a dystopian lyrical premise, backed by sinister musical themes. The result is a truly atmospheric suite capped perfectly by the fan-favourite Brainstorm. 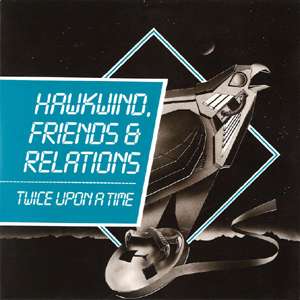 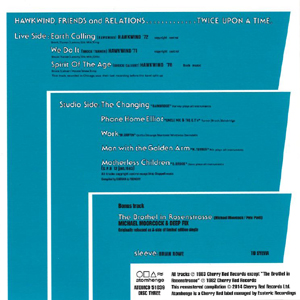 On to Hawkwind, Friends & Relations – Twice Upon a Time, certainly the low point of the set. The cuts chosen really don’t inspire a return to this disc. The live side reaches as far back as ’71 with the ten-and-a-half minute chugging sonic headache that is We Do It. This track sounds like it was recorded through a pillow outside the venue where it was played, but the mind-numbing drone over repetitive beats isn’t even worth peering through the haze for. Why couldn’t this track be shortened instead? Fortunately, Spirit of the Age, recorded in ’78, is a bit more upbeat, and sounds clearer too. The studio side is also dismal, featuring uninspiring new wave from Harvey Bainbridge and Uncle Nik & The E.T.’s followed by a shallow punk track Work, the bizarre experimental Man with the Golden Arm, and lastly Dave Brock’s own insipid contribution Motherless Children. The appended bonus track, The Brothel in Rosenstrasse by Michael Moorcock’s Deep Fix, is only slightly more palatable; mainly due to some chunky bass playing, especially during the outro. 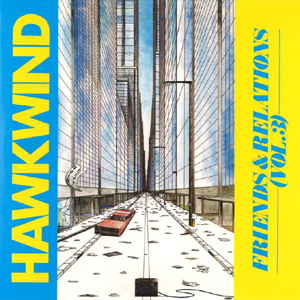 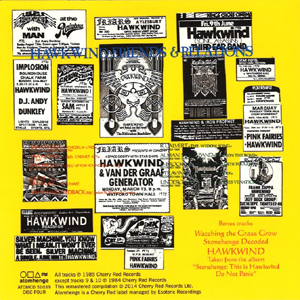 The less imaginatively titled Vol.3 of Hawkwind’ Friends & Relations series is a true return to form right from the start. Psychedelia Lives is a very exciting instrumental jam, and Drug Cabinet Key is a fun headbanging song to get the listener into the mood. Of the remaining tunes, I only have a few notes. Firstly, when listening to Robert Calvert’s The Widow Song, recorded in ’84 but actually an out-take from his ’74 album Captain Lockheed and the Starfighters, I was so sure that the vocals must have been provided by the bizarre and slightly tuneless vocal cords of Charles Hayward, who sings on the track Rongwrong on Quiet Sun’s seminal Mainstream album. It would have been an amazing crossover, and perhaps not that unlikely in the small world of prog rock, but actually the vocals are done by Calvert’s wife, Jill Riches. The other track of note is Canes Venatici by Underground Zerø, who mix things up by throwing a lady into the mix; that is, a more ladylike-sounding lady than the androgenous Ms Riches from earlier. What starts as a playful punky song suddenly turns into melting hot space rock after three minutes and plays out incredibly well. 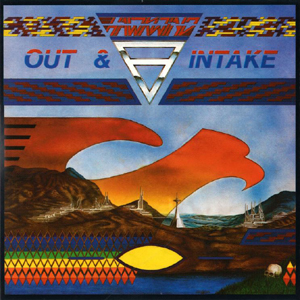 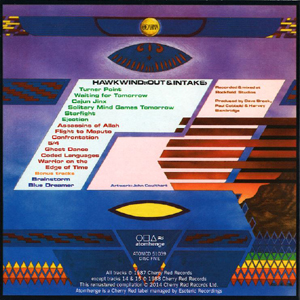 Last but certainly not least is Out & Intake, probably the most diverse collection of tracks to be found in the box. Starting with the free-style inferno Turner Point, the listener has absolutely no idea what kind of ride they’re in for. This is the blessing and the curse of Hawkwind. Cajun Jinx is a thoughtfully crafted track, progressing from ambient beauty into rocking frenzy. Solitary Mind Games is confusingly but consistently misnamed as Solitary Mind Games Tomorrow in every part of this boxset. The duo of Starflight and Ejection make up a nice ying and yang in the centre of the album. The following track Assassins of Allah, though perhaps not so politically correct, is nonetheless a great rollercoaster of rock. It’s quite intresting to hear the band play 5/4 in 5/4, but I wouldn’t say they have much success. The bonus tracks provide some much needed respite after all the craziness and experimentation on this album, providing listeners a chance to once again hear fan favourites such as the haunting Warrior on the Edge of Time and another cracking version of Brainstorm.

It’ll have become incredibly apparent to anyone reading this article that I am definitely not a Hawkwind guru. And perhaps that’s a good thing; after all, Hawkwind fans have in the past been branded as “the wrong sort of people”. When I first realised what I was getting myself into here, I was rather hesitant to dip my toes into this fans-only treasure trove. What I’ve instead seen is a glorious panorama of the bonkers world of Hawkwind and its offshoots; a diverse smorgasbord of space rock and so much more. Though none of the albums themselves are particularly of merit, bringing all five together into one set gives a strange cohesiveness to the proceedings. The experience is only accentuated by the loving recreations of the original sleeves including all the original artwork, all placed together in a sturdy clamshell box. In my mind, this is the first Esoteric anthology to actually have mini-album replicas. While the booklet essay is competent, Brian Tawn occasionally spends entire paragraphs devoted to albums that are not included in the set, and leaving notes about some of the included albums very sparse indeed, so that I’ve actually had to do some Googling in order to understand what I’m hearing. It just feels like it could have been a bit more purposefully-written. For fans, this will be an utter delight, and for me, well… it’s been an education.

[For those wanting to investigate further there’s a facinating in-depth interview with Hawkwind’s Harvey Bainbridge HERE, conducted by Mark Powell of Atomhenge/Esoteric]

MUSICIANS
Too numerous to mention!