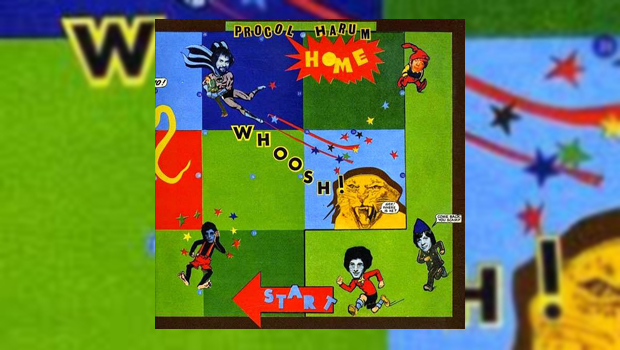 Having reviewed the Deluxe Edition reissue of Procol Harum’s previous album, A Salty Dog, I could not turn down the chance to review the follow up, Home. This album, like its predecessor, has been given the re-master treatment from the original tapes plus repackaging and expanding, presented as a two CD version with eleven bonus tracks, three of which previously unreleased. Esoteric Recordings have again done a fine job with this release, including the lavishly illustrated booklet with restored original art work and notes from Procol Harum biographer Henry Scott-Irvine.

Originally released in June 1970 it followed on from the success of their debut single A Whiter Shade of Pale and the two previous albums, Shine on Brightly and A Salty Dog. Home has often been hailed by many fans as one of their finest albums. Most people are aware of Procol Harum due to A Whiter Shade of Pale but, as these earlier albums go to show, there is so much more to the band than that one single success and they are worthy of further investigation.

The song writing of Gary Brooker and Keith Reid reaches a new level here, with contributions from Robin Trower on two tracks, About to Die and Whisky Train. From the previous album there had been some personnel changes with Matthew Fisher and David Knights leaving, being replaced by Chris Copping on bass guitar and organ. The band now consisted of five members including lyricist Keith Reid and the changes appear to have brought about a slight shift in the Procol Harum sound with Robin Trower’s guitar becoming more prominent. This is nowhere more obvious than on opener Whisky Train which has a nice bluesy feel and some great guitar work from Trower. This is not to say that they have fully changed direction, far from it, there are many of the usual Procol Harum sounds throughout but it goes to show how they were expanding their musical palette.

From a lyrical point of view Home could be seen as rather dark and foreboding with many songs discussing death, but the music here shows development, great diversity and a growing confidence in their art. There are great performances throughout with excellent keyboard and organ work as well as moments of searing guitar. Indeed towards the end of Nothing That I Didn’t Know there are what sound like influences from traditional French music in the fade out. The track About to Die show the band again on top form both in writing and performance.

haling Stories is for me the highlight, a song which for the time was quite ground breaking, showing their progressive rock pedigree. An interesting listen on the second disc is the inclusion of the initial backing track for this song. Overall I don’t think there is a bad song on this release, obviously some stand out more than others but an enjoyable and interesting listen throughout.

As with the previous deluxe release of A Salty Dog there is a second disc included with Home, including a demo, different mixes and various alternative takes. There is the US radio single edit for Whisky Train and two tracks from the BBC Radio One session on the David Symonds show from 12th May 1970 (yes, Radio One, when they used to play rock music), which are previously unreleased. The tracks from this session include versions of Your Own Choice and About to Die which are of an excellent quality. In fact the quality of all the bonus tracks is very good; there is nothing here that makes you question why it was included. Track listings below give details of where and when the tracks were recorded.

To sum up, this is a very good package of an important release within progressive rock history and I have enjoyed listening to it. It demonstrates the continuing consistency in Procol Harum’s music across these early albums and the desire to develop and push themselves forward with each release. If you are a fan or collector this release would be a very good addition.