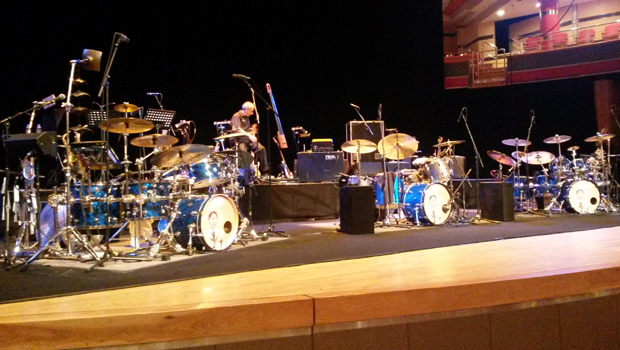 “King Crimson” is not so much a band, but more of an idea or even an ideology, the tenets of which are intermittently given form by its guardian Robert Fripp. Legend has it that whenever there is a music in the ether that only a grouping of like-minded musicians under the guidance of Fripp can play, the resulting formation is King Crimson.

A long and weary battle with Universal Music Group that although presumably concluded at least partially successfully was no doubt more than a tad responsible for Fripp’s retiring from music in 2012, for his mental state at the time led him to make the grim pronouncement that his “life as a professional musician (was) a joyless exercise in futility”. Therefore, it is much to everyone’s surprise and delight that the eighth incarnation of the King Crimson conglomerate is now out there treading the boards, as less than a year after his arbitrary cessation of musical activities, with the causal weight of the royalties battle gone from his shoulders Fripp saw light at the end of the tunnel and reconvened King Crimson in 2013, announcing a tour soon after. Not then, as Ian Gittins of The Guardian has it, a “volte- face”, but maybe a reconnection with one’s raison d’être, o ye of parsimonious spirit and little research.

As those first announced dates were all in the U.S.A., the more fretful and uppity contingent of disciples this side of The Pond – that’ll be me in that number, then – erroneously assumed a repeat of the last American-only tour. How wrong I was, and once more my profuse apologies are offered!

So, here we all are, murmuring in typically English restrained excitement in anticipation of that which was to come. We are gathered in the plush surroundings of Birmingham Symphony Hall, which this evening has become a reverential cocoon for the gathered masses of the church of the angular mind.

The band walk on to Robert’s freshly composed soundscape, a different one each night, recorded only an hour beforehand apparently, Mel Collins joining in on flute. Eventually this fades into the familiar Islands count-out and Larks’ Tongues In Aspic (Part 1) commences proceedings, it becoming immediately apparent that the unusual three-drummer front line is going to work a treat. Welcome to the Mighty Burundi Gamelan of Krim!

Probably of most interest to the fan abroad, or at home but unable to go, are the new songs, and after the storming opener we head directly into unchartered waters. A trio of new tunes, kicks off with Suitable Grounds For The Blues which surprisingly is a blues, though musically only fleetingly. Next up is Radical Action (To Unseat The Hold Of Monkey Mind), which according to Fripp’s diary entry for 27th March 2015 is “an instrumental 12/8 blues shuffle” with “the KC minefield built in”. Led by T-Lev’s NS Upright Bass, it is of course about as far from a blues structure as could be. Meltdown, with Jakko Jakszyk’s dulcet tones leading the way combines the colour wash of the rather fine A Scarcity Of Miracles album with the dynamics of ConstruKction-era Krim, underlined by the extract from the track ConstruKction of Light that followed.

While not possessed of the hushed reverence reported elsewhere, tonight’s audience was definitely in a respectful mood, the quiet sections in some numbers observed with appropriate silence, any minimal levels of a-whoopin’ and a-hollerin’ restricted to the short gaps between songs, and mostly lost in thunderous applause. As we know, no words will be spoken from the stage, but this is music that doesn’t need a “How ya doing?” or a “Hello Birmingham!”. This Krim is a different type of beastie from the various formations fronted by Adrian Belew, whose effusive personality made communication a natural extension of performance. This time round it is simply not needed, the music itself is all the communication you need. Anyway, you try clapping along to these time signatures, I dare you!

What makes King Crimson MK8 a unique proposition is of course its three drummers, so a word or several about them must be written. Maybe obviously with hindsight, they rarely all played at the same time during the songs, but they did get to flex their six biceps and triceps in unison to masterful effect on the three short drum-only numbers scattered through the set. The Mighty Burundi Gamelan of Krim played with precision and power during Hell Hounds of Krim and its close relations, the syncopation was at times astonishing, chief arranger Gavin Harrison applying great skill and metronomic precision.

As we look, stage left is Pat Mastelotto, always a joy to watch, his boundless energy and enthusiasm applied with gusto not just to the large drum kit at his disposal but also to several varieties of metal and at one point clockwork percussion. On top of all that is the usual bank of electronic traps and buttons to manipulate the sound. Pat seems to have taken on the Jamie Muir role for the 21st century, thankfully sans fake blood capsules.

Centre stage is Bill Rieflin, who as the sturdy fulcrum balancing the hurricane and tornado either side of him keeps the required steady beat when not attending to his other major role, that of Mellotron player, essential to the likes of Starless and the numbers from In The Court Of The Crimson King.

Stage right is Ringmaster Gavin Harrison, who throughout the evening gave a display of controlled power, finally letting rip with his much anticipated, and as it turned out stunning solo during 21st Century Schizoid Man, the nearest I have heard to a human replication of thunder, of a psyche splitting asunder. All the while Pat is beaming at him from the other side of the stage like a proud uncle and occasionally clapping along. King Crimson do indeed make joyous music. Marvellous stuff!

Whether its originators appreciate it or not, the album In The Court Of The Crimson King was responsible more than any other for starting what eventually became known as the genre that dare not speak its name, if you are Ian Gittins, or “prog rock” for the rest of us. Amongst many crimes both perceived and actual that the punk revisionists always like to deride the original prog era for is an over-reliance on fantastical lyrical imagery. While very few if any of those original bands mentioned wizards and unicorns in their lyrics, an ill-founded cliché if ever there was one, I would have to admit that Pete Sinfield’s words to the song In The Court Of The Crimson King, are, shall we say, of their time. Mr Gittins described it rather archly in terms that Pete Sinfield himself would have been proud of: “a vermillion gash of sheer cosmic hogwash”, and maybe he has a point. A blinding tune though, eh Ian? And it was amazing to hear this played by the band that wrote it, something I never thought I’d ever get to witness. However, when you look at the same writer’s lyrics to Epitaph and Schizoid Man, songs of dislocation, fear and disillusion that ring as true today as they ever did, you can see what he was capable of once he put the bong down for five minutes. Again, great to see and hear these played by a band called King Crimson.

The whole point of this shebang, as Robert Fripp’s recorded introduction made plain was that this was a celebration of King Crimson, and was there to be enjoyed, so cynical hacks predisposed to negative feelings in all matters prog but finding themselves twitching in rhythm should either actually admit they enjoyed it in terms unbegrudging, or admit that they pre-wrote sections of their “review” with the prejudice blinkers firmly in place, only to clumsily shoehorn them into the finished article regardless of the fact that, in Gittins’ case, he obviously quite liked the concert. Spinal Tap my arse, you lazy fecker! He gets paid for that too, can you believe? In any event, King Crimson long ago rose above any notions of “prog rock” or anything else so conveniently pigeonholed, which ironically enough left them well respected by the original punk family, something the Gittins of this world would know if the word “research” ever cropped up in their jaded thoughts. This is simply no more or less than timeless and magnificent music.

Anyway, where were we? Oh yes….Low chuckles rippled through the audience as the intro tape to Starless played out a quiet recording of an audience applauding and whooping. Ooh, Bob, you are a card! Of course, Starless is one of THE anthems of the era, and this version does not disappoint. Jakszyk has a voice of a similar register to the then youthful Greg Lake, therefore suiting the 1969 material perfectly, but it worked just fine here too. Being a better singer technically than John Wetton, his higher tone lends the song a gossamer, angelic quality.

Another highlight was Fripp’s scintillating solo during Sailor’s Tale. Although Jakko must have seen the master perform this strange sequence a fair few times by now, you could see the look of pleasure and wonderment etched on his face as he thought “How does he do that?” You weren’t the only one, Jakko. Robert Fripp has the most unique style of guitar playing I have ever witnessed and when he lets his fingers do the walking the effect is mesmerising. For me, The Letters and Sailor’s Tale were the most surprising, and most enjoyable inclusions. Revisiting an album that many thought Fripp was not that enamoured of is just the sort of wrong-footing we should expect by now, I suppose. It being his Crimson era, Mel Collins comes into his own on these two, the guttural parps of the baritone sax during The Letters in particular bringing a smile to my careworn fizzog. Fripp’s solo and the two guitars in tandem with the sax during Sailor’s Tale were especially enjoyable.

The only musician I have not mentioned thus far is Tony Levin. Now in the last year of his sixties, T-Lev shows no signs of slowing down and is as much in demand as ever. His bass and Stick playing remain supple and seemingly effortless. I have seen him manipulate the Stick on a few occasions now, and each visit leaves me nonplussed. Whatever it is his fingers are doing, flying up and down that wide fretboard, the noise that results veers from subtle and sublime to a low hertz feral growl, sometimes seemingly all at once. Long may he rumble!

Too soon we have arrived at the end of the main set, the lights dimming and turning red at the conclusion of Starless. A fully justified standing ovation of moderate length followed, during which Fripp shaded his eyes as he peered into the depths of the auditorium at his adoring public, before the band troop off with a wave. Soon, King Crimson return for a final tussle with musical history, reinventing and reimagining what should be regarded years from now as classical music. The “drive to 2018” as Fripp has defined it must surely include the time to write and record more music to add to the new numbers already presented, before eventually releasing what will in all probability be the last King Crimson studio album. If there is one band who can live up to the inevitable massive burden of expectation it must be this not-so-small but nonetheless thoroughly independent, mobile, and most certainly intelligent unit.

To sum up, this evening was not an exercise in nostalgia, or if it was, Fripp and the boys took it down to a vacant Birmingham factory lot and gave it a thorough hiding before dragging it kickin’ and talkin’ back, to September 2015 where it was easily the equal of any “essay in fastidious sublimity” that Mr Gittins may favour.