[With many thanks to Josep Monrós for the use of his photos, please visit his Flickr stream]

Charismatic and enigmatic Amplifier front man, Sel Balamir, amusingly described in a pre-gig interview (which you can read HERE) that his personal creative process was sometimes akin to taking a “psychic shit”, in expurgating his feelings and expressing his art. This thought was magnified vividly during this gig when Balamir stated to the crowd that sometimes “From shit beautiful things grow” . This was a night in which the band produced an impeccable and energetic performance which ignited the audience with their musical chemistry and imagination – Amplifier were indeed a thing of power and beauty.

Amplifier spectacularly opened with the psychedelic instrumental Magic Carpet from their excellent recent exuberant album Mystoria. The audience were going to be taken on a Magic Carpet ride that night as Balamir and Steve Durose illuminated the darkened club with incandescent guitar lines. The first surprise of the evening was that instead of seguing into the excellent Black Rainbow from Mystoria, without missing a beat they went back 12 years to the angular power of The Consultancy from their first self-titled album, singing:

“A bullet to trigger my imagination, in concentration, or toxification, a mountain of juggernaut.” 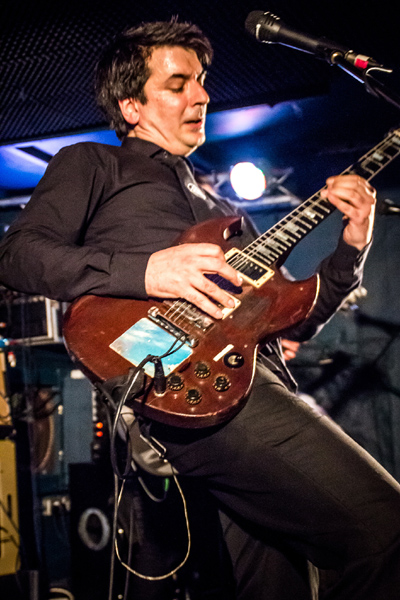 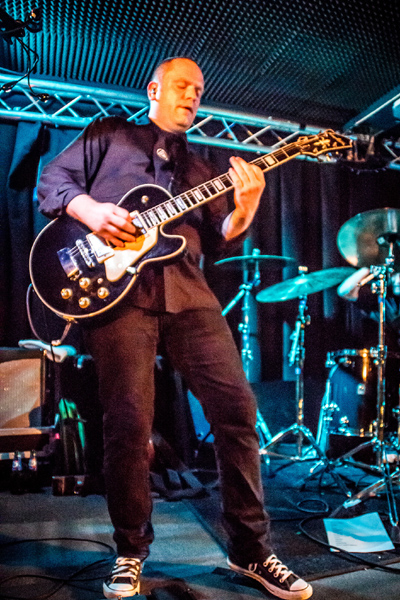 This was a real statement of intent from the band as they swept the audience along with them in a wall of sound. Balamir greeted the gig and said they were glad to be playing at the ‘Sex Change’. Whilst Amplifier’s music can be intense it is clear that Balamir is a man of charm and humour who soon built a good rapport with the crowd. The next section of the gig showcased the excellent Mystoria album, starting with the crunching riffs of Named After Rocky punctuated by stratospheric guitar aptly following the line:

“Dance toe to toe with the devil and I’m gonna do you proud.”

Balamir’s impassioned vocals for this song for the underdog left him stating afterwards that he would need a new voice box. The Meaning of If and OMG continued showing the quality and diversity of Mystoria, and also Balamir’s ability to fuse dark themes with accessible rock, such as in OMG:

“Are you looking for a truth
Where there is no truth to be found.”

The Bristol crowd became increasingly enthusiastic as they drew on the energy and excellence of this tight live unit, and excitement levels reached a new high as the distinctive opening riffs of one of the most outstanding new tracks, Black Rainbow arced across the venue. Any doubters or stragglers in the audience were captivated as Matt Brobin’s incendiary drums exploded and Alex Redhead thunderous bass roared, across which Balamir and Durose could joyfully spray luminous psychedelic guitar sounds.

Sel Balamir delved back to Insider from 2006 with a trio of songs including O Fortuna and mystified the audience with his introductory questions of “Who believes in fate? … Who believes in Free Will?” and after some confused answers gave Bristol “Zero” for Metaphysics! He is clearly a man who thinks deeply and expresses that in his music at times, but he is also grounded in not taking himself too seriously and understands that basically he is playing rock and roll to a sweaty room of punters. It is interesting that even in that context he is able to insert lyrics such as:

“Am I alone in this darkness we call redemption
Well I could not change you
No more than I could change my shadow.”

The strange staccato rhythms and ambiguous lyrics of Open Up from Mystoria was inserted into the Insider era songs and shows that even in a high energy rock gig Balamir can slide in a beguiling and intriguing song without losing the tempo or allegiance of the crowd. However, after Hymn of the Aten Amplifier marched towards a triumphant conclusion by really turning on the afterburners with three adrenalin filled songs from their very first album.

During the blitzkrieg power of anti-war / anti-corporation song Panzer the crowd ride along with Balamir and the band chanting along with the band: 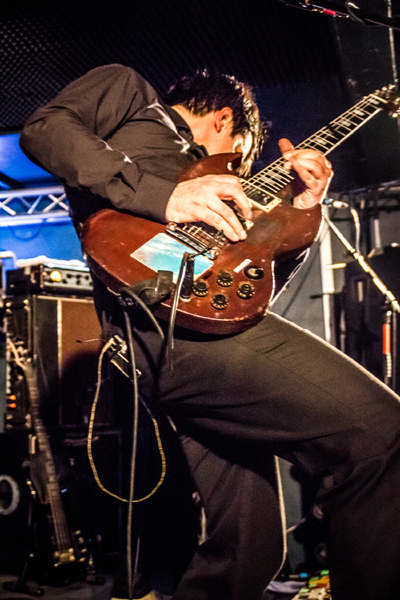 Amplifier were taking no prisoners now and the crowd joyously joined the musical vanguard as Brobin pounded away so hard it was difficult to understand how the drums remained intact. Amplifier roared onwards with their acerbic and scintillating protest song, taking the crowd with them into the feedback chaos intro of Motorhead. The musical juggernaut rolled on with Balamir cutting a cool but not histrionic guitar figure at the front, backed with such precision and skill by Redhead and Durose. The crowd were with them as the band implored:

“Music fills my empty bones
And sometimes it seems it’s the only place I’ve left to go.”

There is a real connection between band and crowd, and they sense the music gives them a sense of release, unity and joy. The last song of the set appropriately was Airborne with Balamir singing “It’s Time to Fly” before the band really took the crowd aloft with a blistering conclusion. The crowd’s reaction was ecstatic as the band left the stage. It’s difficult to imagine this was an ordinary Wednesday night in downtown Bristol – this excellent live band had inspired the crowd with an impressive set of high energy psychedelic rock, and everyone is truly transformed for a few precious hours.
Amplifier return to a rapturous response and launched into one of the main highlights from The Octopus as Balamir bellows:

“Ladies and gentlemen, step right up for the end of the world.”

The crowd was hit by this massive musical tsunami, and the band were surfing along on the crest of The Wave of excitement suffusing the venue “into another dimension”. It was a breathtaking end to an incredible gig.

The band stated after the gig their great satisfaction with the set, and had felt a real buzz from this enthusiastic audience. They appreciated the support of this venue and the atmosphere engendered in The Exchange, which was particularly remarkable for midweek. With material and performances of this quality and excitement it is to be hoped, with due respect to The Exchange, that when Amplifier return to Bristol they should be filling much larger venues.

If you have a chance to see this band in your area do yourselves a favour, just open up your mind and Go!