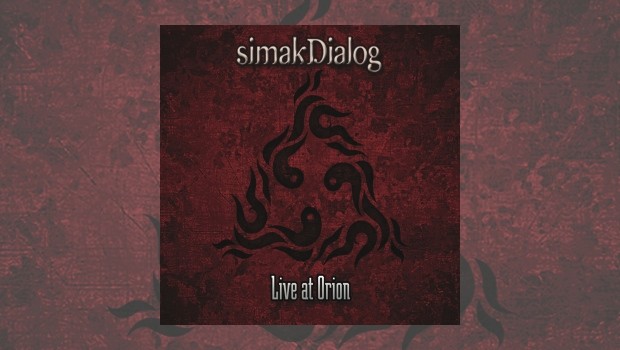 Ah, that’s more like it… after a bit of a diversion in my reviews, covering books, singer-songwriters, DIY punks and cover version albums over on my blog this marvellous album is like returning home after a long trip away.

We are back in the comforting arms of scintillating jazz-fusion, here played out by the band that in my opinion is the jewel in the crown of Moonjune’s healthy roster of artists that inhabit that particular genre. In 2013 this mighty fine band of Indonesians flew over for a visit to the USA, where they played a short tour ending with this performance at Orion Studios in Baltimore.

Led by Fender Rhodes maestro Riza Arshad, simakDialog play extended versions of Riza’s intricate and deft compositions from across their moderately-sized but perfectly formed repertoire, mainly from their then current and still most recent album The 6th Story, including a couple of tunes new to me, although they could well be from the larger part of the band’s 20-year career before Moonjune Records brought them to the attention of the wider world in 2007.

Adding his sometimes lyrical, sometimes coruscating playing atop Riza’s dextrous piano is guitarist extraordinaire Tohpati. What marks this band out, apart from the stunning interplay between Riza and Tohpati, is the use of ethnic Indonesian percussion in place of a traditional drum kit, which serves to add another dimension to this already multi-faceted stellar craft. The ethnicity here adds to the whole and while Riza’s melodies add Indonesian inflections with Gamelan rhythms to the more traditional fusion tropes, it never comes across as contrived, as can sometimes be the case even if unintentionally when applying any non-western musical style to a definitely western music.

Tohpati covers all bases from Metheny-like lyricism to David Torn experimentalism, the latter given its head on the second track. Just listen to the guitarist fly, wings afire, on the dramatic climax of Stepping In. Following an equally expressive and winding solo from Riza, this is seat-of-pants playing that is only prevented from fracturing into dissonance by the consummate skill of the six-stringer, and is a living definition of progressive. In the brief changeover in the middle of this piece the three percussionists come to the fore, adding that extra something by dint of their chattering interplay. Marvellous stuff!

Riza Arshad is also a master of his craft, often playing the signature Rhodes sound in tandem with Tohpati and bassist Rudy Zulkarnaen, perfectly exemplified on opener Throwing Words. It would be easy to make favourable comparisons to Chick Corea where Riza is concerned, but if comparisons must be made, why not start at the top?

Few live albums capture the magic of a performance, but Live at The Orion is one that I imagine manages it, and makes me wish I had been there. Anyone reading this who witnessed this, I can only sit back and envy you the experience. After the dynamism of Stepping In, the band take up with the funk on For Once And Never, the shortest track on this double album at eight-and-a-half minutes. Tohpati gets sinewy with the wah wah pedal as Riza and the boys take it down the line.

That opening trio of songs from The 6th Story cover the breadth of simakDialog’s many styles, and the show has barely begun. This album is a long trip, but it never tires the listener, as there is always something new around the corner, which right now is the expansive and spacious One Has To Be, from 2007 album Patahan. Essentially a tale of two halves, Riza gets introspective with the familiar metallic fuzz of the Fender Rhodes in the first part, and then Tohpati weaves lyrical space-magic with his sinuous guitar playing. Riza and Tohpati form an instinctive paring reminiscent at times of Dave Stewart and Phil Miller, and later on Lain Parantina they illustrate that perfectly.

The longest excursion on this double CD set and the first track of the second CD is This Spirit, one of the new (or old) songs. While it is impossible not to draw comparisons to Return To Forever in particular, and to some extent fusion-era Miles, and Weather Report, as well the Canterbury style referred to earlier, this group goes way beyond recreating sounds from the past by bringing their own special magic to the table, resulting in a thrilling musical ride. This Spirit juxtaposes straightforward ethnically tinged melody with the Fender Rhodes glinting metallic sheen in tandem with the fiery ring modulated guitar, another layer being added by the kendang percussion. Getting ever more disparate the piano and the odd sounds coming from the guitar create a rising tide of discordance, with the emerging nervous tension in the piece becoming tangible, eventually resolving with the original melody in reprise. A triumph of highly skilled ensemble playing, This Spirit is the album highlight for me.

Under Tohpati and Riza’s sonic experimentations some great bass playing underpins Kemerau, and if I have one criticism of this album it is that the mix could have done with a bit more bottom end. That is easily remedied by turning the “source direct” off and turning the bass up a tad, so no worries. Anyone under 40 reading that sentence – take those ear buds out and have a look at your dad’s hi-fi!

The set closes with the only track from 2009’s Demi Masa, an album that highlights intricate melody above sonic exploration, and Disapih highlights that perfectly, being a vehicle for Riza’s nimble fingers. The encore 5, 6 is another track from The 6th Story and sees the guest appearance of Uruguayan guitarist Beledo, perhaps best known for his work with The Avengers. Together, Beledo and Tohpati kick up a storm that leaves you breathless and wanting more. With thrilling call and response playing from the two guitars out of alternate channels, Riza not to be outdone, adds his piano fills to make this track a blazing and fitting conclusion to a great album.

The listener is a privileged eavesdropper on the captivating musical conversations carried out between the members of simakDialog, and although their studio albums are things of beauty, it is in this live context that the band truly comes to life. If you are a fan of jazz fusion you simply must own Live at Orion.