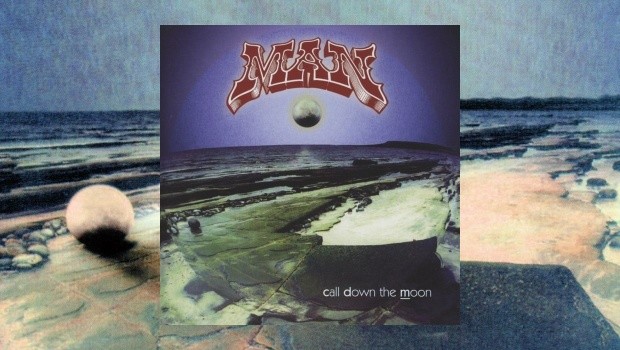 Continuing on from Esoteric Recordings’ excellent re-mastered and expanded reissue of Man’s The Twang Dynasty, which included within the 3CD boxset the entire Glastonbury set from June 1994, we forward to March 1995 and the release of Call Down The Moon. Given the 16 year gap between All’s Well That Ends Well (76) and The Twang Dynasty (92), Call Down The Moon came in a timely fashion. Recorded in Seattle during November 1994 this was the first time the band had recorded in the States, a move prompted by former radio KSAN DJ and long time fan of the band Ron Sanchez. It is said that Sanchez was disappointed with The Twang Dynasty and wanted the new album to ‘have the classic Man sound we all expect to hear’.

The burning question then would be – did they archive that classic Man sound? The answer is both yes and no! A few tracks hark back to that trademark sound, but on the whole those free wheelin’ guys seem a little jaded, and to these ears this is amplified in the opening, title track. Based around the live, jammed riff that preceded C’mon and here stretched out to make the ten minutes of Call Down The Moon. Not that Man were strangers to stretching material out and in time honoured tradition they pulled this off time and time again, and normally, rather successfully. Call Down The Moon is a prime example, although without the characteristic twin lead guitar sound as Deke Leonard remains behind the keyboards, something he does for greater part of the album, leaving Micky Jones to take on the lion’s share of the guitar work. Musically the track works very well, although lyrically there’s something rather forlorn in these words…

And this almost resigned tone continues into the more upbeat, If I Were You…

Although lyrically downbeat, the song itself has a foot stomping beat and infectious vocal melody. In contrast Dream Away is a classic blues number in all its finery and something that could have come from the legendery Peter Green.

Blackout is one of the few tracks where the Jones/Leonard guitar sound can be heard, and the middle instrumental break lays the foundations to what could well have been a lengthy section in the live environment. And we stay with the twin lead sound for the album’s most commercial track, X-Ray Eyes, somewhat let down by the vocals and for some reason John Weathers’ snare drum seems to have adopted an irritating ‘tonk’ for this track. Regardless of the minor gripes this is a great number and just a shame that Deke chose not to play more guitar with Micky on the album. Formidable guitarists in their own right, however X-Ray Eyes demonstrates how well they worked together.

Elsewhere on the album, Heaven And Hell reminds us of that great boogie shuffle the band seemed to be able to produce at will. The Girl Is Trouble brings a lighter note to the lyrics and Deke plays one his memorable slide solos, whilst the twelve minutes of Drivin’ Around sees Man in typical fashion, with one eye on the recording and the other one for the live stage. Drivin’ Around has all of the Man requirements, strong vocals, memorable hooks and some superlative guitar work.

The original album finishes on a lighter note with John Weather’s performing the guitar whilst keeping a rock solid beat on the bass drum – they don’t record albums like that any more. John was also given the honour of performing the vocals.

The two bonus tracks consist of an earlier rawer version/mix of the bluesy Dream Away, whilst the instrumental Micky Buys A Round is an unfinished piece from the recording session. The track was intended to have vocals, but for whatever reasons remained unfinished – this said it works rather well as an instrumental.

Not a classic Man album, but still a strong release with enough of the band’s trademark sound to keep the loyal and the curious happy…