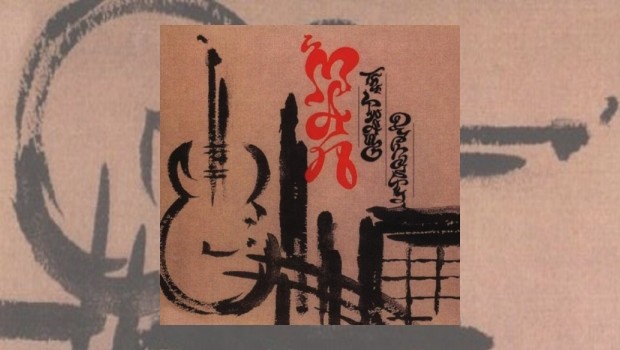 Having tentatively reformed in 1980 it would be a further twelve years before a new studio album emerged in the form of 1992’s The Twang Dynasty and some sixteen years elapsing since their previous studio release All’s Well That Ends Well (76). Although the band did release a live album, Friday 13th (83), recorded live at the Marquee Club, perhaps not surprisingly, on Friday 13th May 1983. Against the previous ‘revolving door’ line-up changes, for this concert and also the subsequent The Twang Dynasty album the same members remained with Man guitar stalwarts Micky Jones and Deke Leonard, along with bassists Martin Ace and ex Gentle Giant drummer John ‘Pugwash’ Weathers.

The album starts promisingly enough with a rather familiar sounding riff and one that’s not a thousand miles away from Hendrix’s Gypsy Eyes. The new album liner notes mention this and also Deke Leonard’s wry response: “if you’re going to steal, it might as well be from the best“. In many respects A Feather On The Scales Of Justice has all the key elements with the band’s signature twin guitar sound and Deke Leonard showing that he had lost none of his vocal prowess. The tempo is heightened for Mad On Her, a ‘tribute’ to the Queen of Pop, (hence the title), with its radio friendly hook-lines, stomping beat and fine guitar solos. Sadly things take a turn for the worse during Jumpin’ Like A Kangaroo, with another pumping beat, however and despite the fine musicianship it lacks that special Man ingredient. Like much of the album the songs are heavily reliant on verse/chorus structures, but lyrically Like A Kangaroo is pretty dire, as the first chorus amplifies: Kanga, kanga, kanga,  Kanga, kanga, kanga,  Jumping like a kangaroo,  Kanga, kanga, kanga,  Kanga, kanga, kanga,  Jumping like a kangaroo.

Granted, with some notable exceptions, lyrics were not Man’s strongest suit, however in a track that has the stamp of Dire Straits’ Money For Nothing, this just doesn’t hack it and does the band a disservice for me. Moving on quickly and although still following a now too formulaic approach The Chimes At Midnight and The Price are more in character and the latter having one of Man’s more infectious choruses and something I could well imagine coming from Mr Springsteen. On the other hand the Deke Leonard and Paul Simmons co-write, Circumstances is Southern style blues rocker with Leonard’s slide guitar adding extra authenticity.

But cutting to the chase and as we reach Woman, I’ll come clean and say I wasn’t greatly enamoured with The Twang Dynasty when I first bought the album and the years have not changed my opinion. There are however some great moments and The Chinese Cut is not only a fantastic song, but had the band released singles as a matter of course, then this could well have served them well in the States. The other stand-out track is The Wings Of Mercury, the band’s fitting tribute to John Cipollina, could have graced any of Man’s classic era albums.

Bonus material can be a bit of a hit and miss affair, however it would be a pretty mean spirited person indeed to dismiss two complete discs of Man live music. Recorded at the Glastonbury Festival in June 1994 and presented here in its entirety. The live arena was always Man’s forte and in 1994 they were definitely on fire, kicking off with the, just shy of twenty minute C’Mon. Opening with a loosely based guitar jam, delays at the ready, before the full band enter the fray around the three minute mark. From there on in it is Man at their finest amply displaying that the twenty minute song was not dead to the unsuspecting masses. The original recording and subsequent re-mastering are excellent and John Weathers drums are really tight and crisp, complimented by Martin Ace’s deep bass and rounded off by the guitar twins.

As intimated earlier the original album did little for me first time around and some twenty two years later I must admit I was somewhat underwhelmed on hearing it again – initially. Yes the distinctive Man sound was present, but cocooned within a rather radio friendly classic rock sheen. Only listening to the tongue in cheek referencing to Madonna track Mad On Her, did the song take on more of the Man like palette. Next up is Even Visionaries Go Blind, a track that really should have been on The Twang Dynasty, and certainly could have replaced the dreadful Jumpin’ Like A Kangaroo, but for some reason was criminally omitted. A great Man track with signature guitar, some excellent slide work from Deke Leonard and great harmony vocals.

With the audience now firmly behind them the band launch into one of the standout tracks from the original The Twang Dynasty album, The Chinese Cut. Weather’s proves once again to be a fine inclusion to the ranks and the drumming is a highlight – in this catchy, riff laden, four minute rocker. The Glastonbury Disc One finishes with the band’s tribute to former Man band guest member and Quicksilver Messenger Service guitarist John Cipollina who passed away in 1989. The Wings Of Mercury, again one of the stronger tracks from the original release and one that makes an excellent transition to the live stage. As a side note and whilst listening to the original album it occurred to me how much the track reminded me of some of Jack Bruce’s music…

Disc two opens with a fine rendition of The Ride & The View taken from The Welsh Connection (76) album. Deke Leonard opens up with a lengthy solo slide guitar extravaganza which accounts for almost half the twenty minute duration of the track, ahhhh, those were the days! A Feather On The Scales Of Justice, which opens the original Twang album, again works better in the live environment, breathing life into the song, which is somewhat missing from the studio version. We return to familiar Man territory for closing half hour of the set. The wonderfully titled Many Are Called (But Few Get Up) is played with aplomb and one of the finest versions I’ve encountered. A nice touch is the inclusion within the track of The Storm, which dates back to the band’s second album 2ozs Of Plastic With A Hole In The Middle (69). The tranquil instrumental section sits very well here. Wonderful stuff. Two band classics finish the show, Bananas and Romain – and damn fine versions they are too.

This new 3CD re-mastered and expanded version of The Twang Dynasty is highly recommended to both existing fans of the band and those new or curious. Although Man’s Glastonbury performance has been previously available as an ‘official bootleg’, with the omission of Many Are Called (But Few Get Up)/The Storm and show closer, Romain, Esoteric Recordings re-mastering is spot on. So the clam shell box-set, is to be highly commended, bringing together both the original album and what is one of Man’s finest live performances. The package also includes a comprehensive booklet and even a mini poster.

The two Glastonbury discs are the highlight for me and certainly worth the admission fee alone.