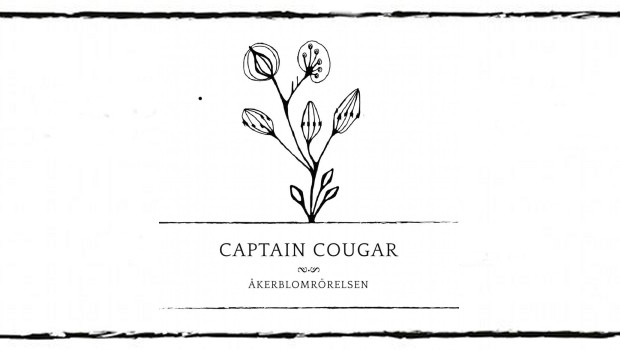 In the autumn we received Kivenpyörittäjä, a splendid album from Finnish composer and keyboard player Juha Kujanpää. As I greatly enjoyed and therefore favourably reviewed the music, I was intrigued when a few days after the article appeared we received an email from Finnish label Pinetree Records asking if TPA would consider an album by Captain Cougar. Other than the inclusion of Juha Kujanpää within their ranks this was once again a wholly new band to me. The email included a link to the opening track by way of an introduction to Captain Cougar, accompanied by a proviso note suggesting that Maria may not fully represent the album as a whole, however on hearing the track it was sufficient to make me want to explore further.

Despite the band name, which I must admit didn’t seem to capture the music I was listening to, and along with some unfounded misgivings on hearing the opening lyrics, Åkerblomrörelsen turned out to be an adventurous and well thought out album, complete with an underlying concept based around the life of Ida Maria Åkerblom, a Finnish religious cult leader active in the 1920’s. Ms Åkerblom’s life seems to have followed a somewhat troubled course and in so many ways the music wonderfully captures this, especially those more bleak and desolate moments.

The band describe themselves as an “americana/folk-influenced indiepop-group”, which suggested a slightly more ‘upbeat’ music than that found on Åkerblomrörelsen. Regardless of this Jussi Petäjä’s thoughtful writing means that Åkerblomrörelsen works on many levels starting with those tracks where vocalist Laura Lehtola is left with the simplest of accompaniment, as in the opening track, Prayer, and the verse sections of the haunting Inner Desert, to those potent sections where the core musicians add power and drive.

Prior to reviewing the album I back tracked through the band’s previous album, Dreams Long Gone and noticed that there had been a personnel change and vocalist Eva Louhivuori was no longer with the band. Quite a difficult act to follow as her clear voice certainly suited the music well. Her replacement, Laura Lehtola does not perhaps possess the same clarity, however I found her slightly more fragile, but distinctive timbres, worked really well within the context of the album. As previously mentioned Maria may well not fully represent the album as a whole, but Laura’s delivery to the hymn like piece wonderfully sets the tone for what we are about to receive.

This said don’t turn the volume up too much, as I did, because Revelation‘s vocally dense opening jumps straight in, before departing and leaving Laura to take on the initial verse with the piano and guitar – followed by ever increasing layers of instruments and vocals, whereas Prayer is a gentle acoustic guitar piece replete with sympathetic harmony vocals and the gentlest of musical ornamentation. I have to admit the album took a couple of runs through before things started to click as although certain elements worked from the outset as with delightful harmonised vocals of Prayer, subsequent listenings revealed greater depths both vocally and instrumentally and this is true of the whole album with the lyrical content in particular becoming increasingly more apparent as they reveal the chapters in Maria Åkerblom’s life.

At just under eight minutes Inner Desert is a stand out track, with its clock-like chime qualities and Laura’s delicate voice capturing one of the darker episodes in the life cycle. Not an album for any demonstrations of instrumental prowess, however the musicians do take over during the middle section of Inner Desert, adding power and depth before the concluding with vocals and chimes.

Palace drifts in effortlessly from the previous track and at this point, first time through, I thought I was getting the measure of the album. Wrong, and to confuse matters the track gradually mutates into a folky, pop-like section with synthesized drums and percussive keyboards. It works well and odd as it appears it just seems to be a natural movement and at its conclusion has nicely transitioned our thoughts, paving the way for the immensely catchy Seventh Stage. Replete with some really complimentary keyboards from Juha Kujanpää, the track also includes a rich string section and brass courtesy of Petra Lujala on French horn and Ilpo Soikkeli on trumpet.

Rise, the longest track here at just under ten minutes, brings all the elements of the album together. The band, who I have neglectfully overlooked, do what they do throughout the album and act as a cohesive backbone. During Rise and in similar fashion to Palace, the music takes on a more commercial vibe, whilst in the middle section the band move into a post rock, almost shoegaze mode, building to a climax and culminating about two thirds of the way through. After which and as the music is allowed to drift effortlessly into atmospheric space, this may well have been a fitting point to finish the album…

However one track still remains,  All For Love, and for the final time Captain Cougar demonstrate their ability to combine infectious melodies in an imaginative and resourceful fashion. With the impending festive season well upon us this is a welcome antidote to the typically saccharin Yuletide musical fayre.

What is and what isn’t prog is not a question to be raised here, and neither is whether or not Captain Cougar would fit into it. Åkerblomrörelsen however, is a well constructed album, which revolves around a concept, going on to explore and return to these common elements and themes throughout. Sound familiar? On top of this the music is thoughtful, lyrically well written and for those who have enjoyed the recent music of iamthemorning music may well want to investigate.

Included below is a Soundcloud link, which has three tracks from Åkerblomrörelsen as well as all the tracks from the band’s previous outing Dreams Long Gone. Neither I would suggest will resonate with just a cursory quick listen, but a couple of runs through may well reward the time spent. Both albums are absorbing and well worth checking out.