Marcus O’Dair is the writer of an authorised biography of Robert Wyatt, Different Every Time, which is out at the end of the month. He is also one half of esoteric electronica duo Grasscut, who have a new single out, a cover of Robert Wyatt’s Catholic Architecture from his 1991 album Dondestan.

Firstly, a word or two about the single – Both fans of Robert Wyatt, Andrew Phillips and Marcus O’Dair aka Grasscut have crossed paths with Wyatt before when he contributed to the track Richardson Road on their acclaimed 2012 album Unearth. Robert liked the outcome so much the tune is included on the rarities disc of the Domino Records compilation to be released to tie in with Marcus’ book of the same title.

Grasscut’s version of Catholic Architecture is a relatively faithful interpretation, with plaintive brass adding just the right amount of melancholy to a typically redolent Alfreda Benge lyric. The flip-side, if such a term can be used these days, is the duo’s own Beacon, a nicely reflective song where the protagonist is made aware of a dislocating feeling of strangeness in familiarity, looking down on his hometown from a hill. It compliments the a-side perfectly, and is an indication as to what we might expect on the duo’s new album Everyone Was A Bird, out next year.

Marcus has kindly agreed to a brief chat about the single and his Robert Wyatt biography, Different Every Time.

Roger: Hi Marcus, and thanks for taking the time to talk to us. Firstly, what led to Andrew and you choosing Catholic Architecture of all the Robert Wyatt songs you could have covered?

Marcus: We are both Robert Wyatt fans, of course, but we chose this particular song because it comes from a brilliant but sometimes neglected period of Robert’s career, the Rough Trade years of the 1980s and very early 1990s. The lyrics are actually by Robert’s wife, Alfie, and are about a small seaside town near Barcelona, where she and Robert spent two winters in the 1980s.

Roger: Who contributed the achingly lovely trumpet to the song?

Marcus: My mate Rory Simmons of LOOP Collective. We played with his band, Eyes of a Blue Dog, at the London Jazz Festival last year.

Roger: This single is a taster for Grasscut’s new album Everyone Was A Bird , out next year. Beacon sets a lovely scene; is it indicative of what we might expect on the new record?

Marcus: To an extent – although Beacon was actually written and recorded after the album. It just seemed to fit better with Catholic Architecture, as a double A-side, than on the album. The album is recorded and should be out in the spring on Lo Recordings.

Roger: It probably does not need pointing out that both Andrew and you are big fans of Robert Wyatt. I first got into Robert Wyatt at the tail end of the 1970s, thanks to a combination of The John Peel Show and the seismic cultural shift that occurred as a result of the punk revolution, an eye-opening period both in terms of music and politics, for me and thousands of others. What were both your entry points to Robert’s music?

Marcus: Andrew has been into him since he was a teenager; I think the track Born Again Cretin was his entry point. As for me, I can’t actually remember the first track I heard – possibly something from Rock Bottom? I first met him when I interviewed him for The Independent.

Roger: Andrew and you must be thrilled that Robert picked Richardson Road, his collaboration with Grasscut, for inclusion on the tie-in Domino Records compilation of the same title as the book?

Marcus: Absolutely. I talk about this in the liner notes, how I was involved in that compilation and felt a bit embarrassed when it came up as a possible contender. But Robert insisted. It’s humbling because there is some superb music on there: Hot Chip, Björk, Mike Mantler, Working Week…

Roger: In what must be an incredibly busy and fulfilling time for you, your other project, Different Every Time, an authorised biography of Robert Wyatt is due to hit the shops on 30th October. How and when did the idea for a book on the much-loved songwriter come about?

Marcus: Well, the busy period – at least as far as the book is concerned – is over, really. But yes, it’s great to see it as a tangible object rather than files on my laptop. How did the idea come about? A while after the interview with Robert I mentioned above, I realised that no-one had written the story of his life, although there’s a meticulous discography by Michael King. As well as wanting to write about the music Robert has released both as a band member (Soft Machine, Matching Mole) and as a solo artist, the appeal for me was that his story takes in such a range of music and musicians – from the avant-garde jazz of Evan Parker, Mongezi Feza and Charlie Haden to Paul Weller, Brian Eno, Jerry Dammers, David Gilmour and on and on. And also that there is so much in there beyond the music: paraplegia, booze, Marxism and so on. So, rather audaciously, I asked him if I could attempt this book that was crying out to be written.

Roger: You kindly sent me a list of the chapter titles. It is looks very comprehensive and damned tantalising! It must have taken an awful lot of research time?

Marcus: Yes, it took me an embarrassingly long time, partially because I was doing too many other things but also because I spoke to quite a lot of people – and, although he claims to be lazy, Robert has actually released an enormous amount of music if you include his guest appearances.

Roger: Did you get to talk to Robert about his life-changing accident? It can’t have been an easy subject to broach.

Marcus: Robert says he was too drunk to remember what happened immediately prior to the fall but he did discuss the experience of lying on the pavement immediately afterwards and hearing what sounded like a wolf howling in the distance. Only later did someone tell him that the scream was his own.

Roger: Politics were a central tenet of Robert’s life and work around the late 70s and into the 80s – is this explored in the book?

Marcus: I don’t think you could avoid it – even if Robert now says he failed in his attempt to make music ‘un-misusable’ by the political right, he still finds Marxism the most useful lens through which to see the world. I talked to people like Chris Searle, now the Morning Star’s jazz critic, and still one of Robert’s (and Alfie’s) close friends, who first got to know them during the period you mention through the organisation Art Against Racism and Fascism.

Roger: Robert Wyatt has worked with dozens if not hundreds of musicians over the years, from the relatively obscure like Michael Mantler to the world famous likes of Brian Eno. Apart from Robert, who else did you interview for the book?

Roger: How, if at all, had any of your preconceptions of Robert altered by the time you finished the book?

Marcus: I obviously learnt a lot more about Robert, but I’m not sure there was a dramatic shift in the way I saw him. I can say, though, that I learnt a lot about a range of subjects from Marxism to Pataphysics – the surreal pseudoscience invented over a century ago by Frenchman Alfred Jarry.

Roger: I will be at the Evening With Robert Wyatt at the Southbank Centre on 23rd November (a few tickets left at time of writing – see link below). What format will that take? Will there be any music performed?

Marcus: The main part of the evening will be the two of us having a chat onstage, as we did in Bristol recently for an event organised by the Wire magazine. Robert doesn’t perform live, due to stage fright, but you wouldn’t guess it if you saw him telling anecdotes. At the Bristol event, one bloke in the audience asked permission to touch Robert’s beard. This was granted.

Roger: Haha – I don’t think I’ll be repeating that particular request! Once again, thanks for taking the time out from your hectic schedule to answer my questions, and I look forward to seeing you on 23rd November. 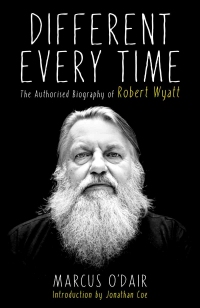 Different Every Time: the Authorised Biography of Robert Wyatt by Marcus O’Dair will be published by Serpent’s Tail on 30th October.

An accompanying compilation album, also entitled Different Every Time, will be released by Domino Records on 17th November.

Marcus is also appearing in conversation with Robert at the Queen Elizabeth Hall in London on 23rd November, as part of the London Jazz Festival.

Signed limited edition prints of the artwork for two of Wyatt’s solo albums, Rock Bottom and Ruth Is Stranger Than Richard, are available at www.hypergallery.com.