First night of the Pale Communion tour and Opeth are in Bristol, the third time I’ve seen them at the O2 Academy, this time with Alcest in support.

Unfortunately, as a result of a curfew to accommodate the club night afterwards (which Opeth’s Mikael Åkerfeldt humorously referred to during the show with “You’ve got to make way for the guys who want to dance, Dude!” and “People want to dance – you have to respect the dancing people!”), the combination of an early start time and traffic issues meant I only got to the Academy near the end of Alcest’s set but I thoroughly enjoyed what I heard. A very good choice as support to Opeth, Alcest are another band that have taken their metal influences into a new direction. Starting as a black metal band their sound has evolved to include such elements as shoegazing and post-metal. I had not come across them before but the few tracks that I listened to before the show boded well and they certainly delivered. It was a shame that I didn’t see the rest of the set but the two songs I did see were excellent and received a very supportive response from the crowd. At the end of the last song the guitars were allowed to feedback as the band gradually strolled off the stage, eventually leaving guitarist and singer Neige to wring every last ounce out of his instrument before departing in an equally relaxed manner. Impressive stuff.

Metal has to be the most cliched musical genre there is but it is gratifying to know that there are bands like Alcest and Opeth around who are prepared to evolve outside the constraints of mainstream metal. My tastes have evolved too over the decades and it has been a long time since I went to a straight metal show, “all tattoos and testosterone” as Mikael mentioned during the show, but using metal as a basis upon which to add interesting flights of fancy certainly makes for an invigorating evening. 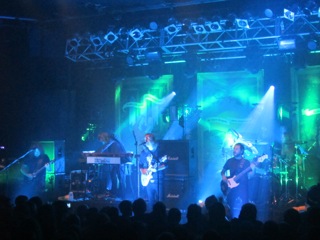 With Alcest on stage at 6.45 and finished by 7.30 the stage was set for the return of Opeth. The Heritage tour had seen a set free of the death growl vocals, a trademark from their early days that has become more and more sidelined over recent albums until being cast aside completely for Heritage which took the Opeth sound into a decidedly ’70s prog direction. So what of tonight? Expectation was for more of the same with the bulk of the set taken from Heritage and new release Pale Communion and with the lights going down at 8 o’clock the backdrop was revealed showing the triptych artwork from the cover of the Pale Communion album. The Three Ages of Opeth and a clue to what we are going to witness?

With a Middle-Eastern flavoured backing track the band took their places to huge applause and began with a double-hit from Pale Communion, the live debuts of the album’s opening pair Eternal Rains Will Come and Cusp of Eternity. Two of the shortest tracks on Pale Communion, both of them translated well to the stage with the Hammond organ of newest member Joakim Svalberg making a tremendous impact. Åkerfeldt was in fine voice and the band seemed relaxed and well drilled. Åkerfeldt apologised for the fact that they were sure to “fuck up” now and again during the set but these moments were few and far between and in no way detrimental to the show. 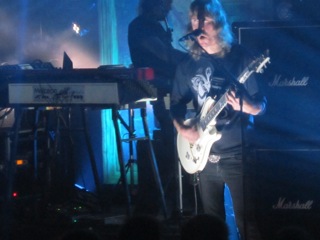 He asked how we liked the way they played the new material to a resounding cheer and then explained how they were using this show to road test some of the songs to see how they went down before introducing the next number. And then the surprises started happening… 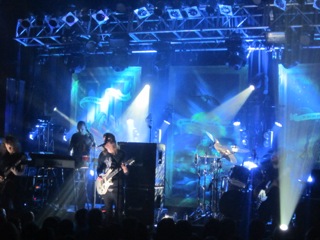 What we got next was Bleak from the awesome Blackwater Park album, full-on metal riffing in a thumping extended piece featuring death growls as well as clean vocals. And to prove that the old vocal style was back in force, next up was The Moor, opening track to 1999’s Still Life, the acoustic intro giving way to a quite massive track of contrasts and extremes, power metal and delicate melodic interludes, Åkerfeldt swapping between the vocal styles with ease. I really don’t know how he does this; one so brutal you’d think he’d lose the ability to sing any other way, the other so sweet but together they underline the contrasts and dynamics within Opeth’s music, a variety that makes them one of the most interesting bands around.

Those who have come to the band as a result of their work with Steven Wilson or the more prog-edged sound of the last couple of albums could be disappointed by this return to their older ways but for me there was a good balance. Opeth, having boldly driven through their transformation at the risk of putting off older fans, have now re-embraced their past with little concern for how more recent converts would react and what we have now is a band without barriers to what they can and can’t do. This is a very special place for the band to inhabit and all credit to them for doing what works for them with the hope that they can draw their audience along in their wake.

Already Martín Méndez was a joy to hear, nailing down the bottom-end with some staggeringly florid bass playing, coupling beautifully with the busy intricacies of drummer extraordinaire Martin Axenrot, his vigorous cymbal work adding greatly to the new tracks in particular whilst the diamond hard rhythms underpinned the heavier tracks. The guitar and keys could have been slightly higher in the mix from where I was but the sound was pretty good throughout and the band had clearly taken the decision to sacrifice volume for clarity, a decision that paid off in spades and brought all elements of the set together for the benefit of the listener. 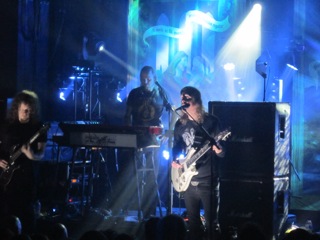 Some of the crowd were already headbanging along blissfully to this return of a more metallic Opeth but then they upped the ante by playing Advent from second album Morningrise. The crowd went as mental as you’d expect for such an old song but the fact is that, certainly as played by the current band, it fits in well with the more modern material and shows that at their very core Opeth have remained true to their ideals, they just express it slightly differently these days. I often forget how much lead guitar Åkerfeldt plays but he was on fine form tonight, the interplay with Fredrik Åkesson particularly noteworthy as the latter peeled out the trademark serpentine riffs that are so essential to the music of Opeth.

A couple of years ago calls for Black Rose Immortal from Morningrise would have been laughed at as implausible. Today those calls seemed perfectly in keeping with the way the set was developing but as Mikael reminded us, the only reason people call out for that song is that it is 20 minutes long! It would surprise nobody if they were to play it but on this occasion it stayed in the locker and they chose another new song, Elysian Woes, to continue with, the contrast with Advent striking but also the similarity in the essence of the material. 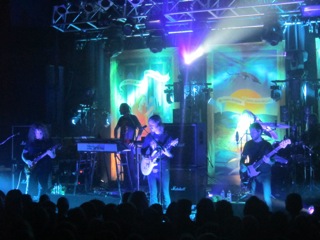 Another brief and quite gentle track, it showed Åkerfeldt’s adept vocal delivery and Opeth’s skill at producing atmospheric and unsettling works that capture the imagination, the delicacy of the arrangement a stark contrast from the last few numbers with the swell of Mellotron a blessing for this listener. 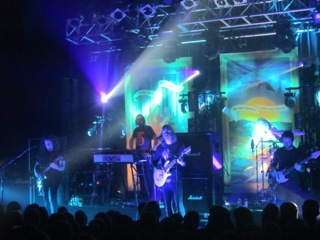 The surprises continued; a dark and moody Windowpane from the Damnation album, featuring lashings more Mellotron, followed by an intense metal thrash through April Ethereal from My Arms Your Hearse. Then a track that Åkerfeldt tells us they will not fuck up – The Devil’s Orchard from Heritage, a song that has featured in every show since the release of that album and one of only a handful in the set that the band have played live since at least 2010. The Hammond work of Svalberg was superb here and this is simply a great piece.

Åkerfeldt is a fantastically laid back front man, genuinely funny and entertaining, holding the audience in the palm of his hand with his wit and warmth. He doesn’t have to exhort his audience to sing, clap, bang their heads or anything else. He’s there to introduce things in his own individual way to be enjoyed however the listener sees fit. His anecdote about having to recently take his daughter to see One Direction was, as with all his announcements, greeted with gales of laughter. As it turns out he liked 1D’s band but didn’t care at all for support act, Aussie pop funsters 5 Seconds Of Summer. He’s a genuinely funny guy. 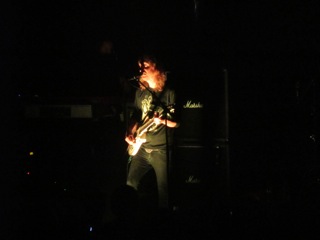 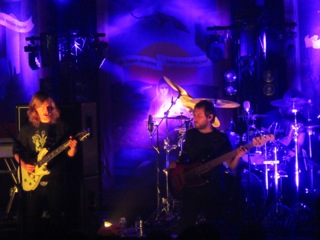 Next up, a romp through a couple of later classics from the period in the late 2000s where Opeth were truly reinventing themselves, The Lotus Eater from Watershed and The Grand Conjuration from Ghost Reveries; the former a sublime mix of the clean and growling vocal styles, the latter showing off Axenrot’s dextrous drums with additional bongo accompaniment from Svalberg.

Leaving the stage to riotous applause and with the clock ticking towards curfew they soon returned for the inevitable encore.

But how to follow what has gone before? Well, the title track to 2002’s Deliverance album will do nicely. A 13-minute piece coming on like a metallic version of Rush’s YYZ and then cutting through all kinds of twists and turns to an off-kilter machine-gun guitar conclusion. It is like a distillation of all things Opeth into one track.

What a set. 13 songs with 10 albums featured of the 11 they have recorded, only their debut Orchid was missed out. Three tracks from Pale Communion – some of the shorter ones at that – and only one from Heritage. The impact from having so many songs in the set that were the opening tracks on their respective albums was noteworthy and the dynamic approach that the band have taken in order to relay these tracks in a live environment without solely relying on volume set them apart from most metal bands. Opeth’s music has always been about so much more than the intense aggression, that is just another part of their arsenal to be utilised where required. 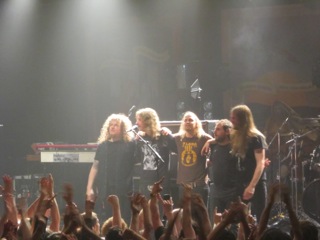 Where they go from here is anyone’s guess but Opeth have been on a roll for some years now and with this tour they appear to be completely reinvigorated, reclaiming the whole of their catalogue in a way that other bands that have taken the stylistic leap of faith have failed to do. There is much here for both the metal head and the prog enthusiast to enjoy so hopefully the audience for this magnificent band will continue to increase as they astound us further in the future.