“Out here in the perimeter there are no stars” said Mr Morrison, and where Fleetwood in Lancashire is concerned the metaphor becomes soot flecked reality if we are to believe the various hideous epithets appended to his home town by Fred Laird, head honcho of northern Kosmische Motorcity Machine Earthling Society. This long running but sadly still obscure combo gestates some of the biggest noises in the firmament, and with their new album England Have My Bones about to hit the shelves, virtual or otherwise, it seems an opportune time to catch up with the Ür Rock maestro himself… 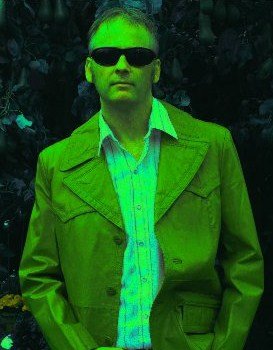 Roger: As a fellow aficionado of all things Deutschrock, tell us how you first discovered the Kosmische Music, stuck out there on “an estuary that smells like it leads to the Devil’s arse”!

Fred: Probably from The Fall. I’ve always been a fan since the early 80’s and it was an interview from M.E.S that mentioned Can for the first time. Also, I used to work at Kwik Save a long time ago and there was a guy who collected in the trolleys that was called ‘Trolley Mike’. He was from Blackburn or somewhere and had a Mick Miller hairdo and the most prominent blackheads on his skull cap that I had ever seen. He came in one day and gave me a copy of The Faust Tapes and Cannibalism on vinyl. He said “you’re a bit out there laddie, so I thought you might like these”. It changed my life.

Roger: What were your other formative musical influences?

Fred: Punk, post punk, Motown, Glam and Johnny Cash. Metal was for tossers according to my family. When I became an individual and shook the influences of my brothers and sisters, I got heavily into psychobilly, mainly The Cramps, Gun Club and Tav Falco and then onto The Stooges and MC5. One day I was introduced to the 13th Floor Elevators and a lifelong love affair began. I used to go to this record shop, the imaginatively titled ‘Record Centre’ and the woman used to look over the counter at me and think ‘for fuck’s sake not him again’. I’d order an Elevator’s album or a Stooges album and maybe with a stroke of luck a copy would come in, but it could take up to 12 months. People don’t realise today just how hard it was back then to get your hands on this stuff. It was easier to score heroin.

Roger: Do you hail from a musical family?

Fred: Not really. I had an uncle that used to croon around the local pubs and sounded like Tony Bennett but apart from that there is no musical history as I know of.

Roger: What inspired you to take up the guitar? What was your first band?

Fred: Just really a love of music from an early age. The guitar sound of Steve Jones being an early recollection of something that struck a nerve and then in the early eighties when the Mary Chain came out and it was like, anyone can do that.

My first band was a pretty crud affair. I was shown a few chords but amazingly could write a song straight away; however I was hopeless at covers. I had a Russ Shipton Beatles song book which looked like you needed 7 or 8 fingers on your left hand to form a chord. So, we started this original band where I was influenced by The Stooges, the Velvets and the Elevators and the other singer in the band wrote songs influenced by Robyn Hitchcock and The Beatles. We tried to combine it but it was miserable stuff. We were called Edison’s Eye and I was a really shit quiet singer and the other guy thought he was John Lennon but really sounded like Frank Sidebottom. We did one gig at the Dockers club in Fleetwood and they paid us 80 quid not to go back on after two songs and a committee meeting haha.

Roger: So, Earthling Society – how did that come about?

Fred: I’d been in another band that had done some stuff in London and had a release out that got played on John Peel. We’d gigged around a bit and it all got rather disheartening. We called it a day and we were just about to give up and we met Jon (drummer) in the pub. He’d not played in a band for some years and Dave (bass player) and I got together and just started jamming and recording stuff for our own amusement. Next minute we’d done an album and we sent it to Julian Cope who loved it and gave it album of the month. That was 9 years ago!!!!

Roger: With the rise and rise of the internet and easily affordable recording software, how hard has it been getting Earthling Society’s name noticed above the hundreds of terrible bands out there who would not have got further than their Dads’ garages pre-interweb?

Fred: It’s difficult. We’ve not helped ourselves over the years with band members that should not have been in the band to start with, coming along and putting their little stamp on something they didn’t understand.  The albums that worked best mainly had Jon and I doing everything but then we couldn’t play the stuff live. You then bring in people to help out live and they screw your vision up and you start sound cack. I made a decision to get rid of proper keys and replace our bass player and basically go back to year zero. That was ZodiaK and it was like a new beginning for us. The problem is, is that the ‘new’ psychedelic scene has no place for us, we don’t fit in. When you’re in an exploratory psychedelic band you are meant to ‘explore’. One chord for twenty minutes and ‘A careful with that axe Eugene’ bassline is not exactly breaking moulds. The other problem is you have the English space rock scene where every fucking band is a Hawkwind clone or want to sound like Bob Calvert. On top of that you have a crowd that want you to sound like Hawkwind too. I mean how un-psychedelic is that??

Roger: That’s a real shame, but such is life in music land these days; conservatism rules, unfortunately. Tell us a little about your recording and composition processes, particularly in regard to the new record.

Fred: With the new album I’d wrote a handful of songs on my acoustic, stuff like Tortuga and Aiwass from riffs. The rest of it has come from jamming really. Jon and Kim are the best musicians I have ever played with and they read each other amazingly. Because of this England Have My Bones was such a quick recording, as was ZodiaK. We recorded 7 songs for the new album but it was 70 minutes long and would not fit on a single vinyl release. This left three tracks over for the final part of a loosely linked trilogy. Everything Rises Must Converge will be out next year.

Roger: I look forward to that. No doubt it’ll be a monster! The new album is on Riot Season Records. What difference does it make having label behind you?

Fred: It’s great having Riot Season involved. Everything from the track listing to the artwork has been overseen by Andy. He has helped shape it into the album it is which I think will be considered our masterwork.

Roger: Hopefully there will be some gigs soon? Will there ever be a gig south of Birmingham before we all have to don our slippers and shuffle off to the retirement home?

Fred: Well we have a few issues with health at the moment but people will eventually be on the mend and yes we do want to plug England Have My Bones. We want to give people the chance of hearing it all live.

Roger: Great! I’ll be there…

Thanks for your time Fred. Keep on keepin’ on…

…and finally, here are some of Fred’s Favourites:

You can’t argue with any of that…well, you could, but you’d be wrong!

TPA Review of England Have My Bones