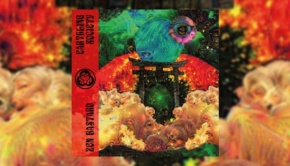 If there’s an award for album title of the year, this wins it, surely? Arising like a mutant bastard love... Read More →