The Fleece in Bristol is a lovely little venue that attracts plenty of big names but I can’t imagine that they’ve ever played host to musicianship of the quality that was on display this evening. 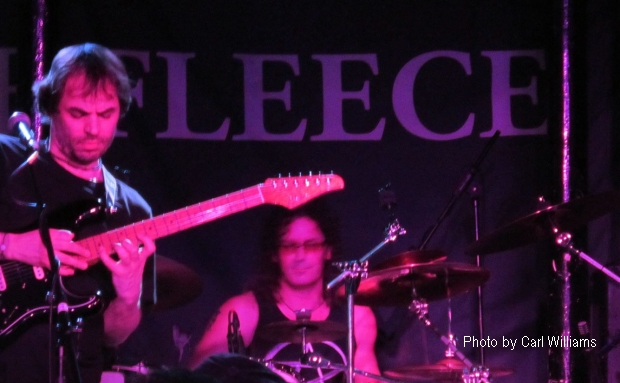 With a healthy crowd already in, Godsticks opened proceedings at around half past 8.  Looking confident and relaxed they played a great set filled with the sort of performances that many have come to expect from them.  Now filled out to a four-piece with the addition of Moray MacDonald on keys and additional vocals, Darran Charles remains the focal point, his stunningly individualistic voice and guitar lines central to the music.  With 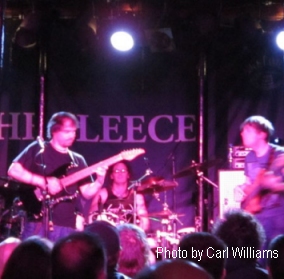 Darran taking the melody, the extraordinary rhythm section of Steve Roberts and Dan Nelson nails it all down.  It has been said before that Dan has developed hugely over the last couple of years and is a great talent who just gets better and better.  He looked more comfortable tonight than I’ve ever seen him before and locked in with Roberts’ intricate powerhouse drumming to great effect.  They really are a top drawer team, Nelson following the drummer’s every move, laying down the bubbling bedrock over which Charles can play his blistering runs.  MacDonald’s keys fill out the sound but do not swamp it and the Godsticks sound that fans of the band have come to know and love remains intact. I was interested to see if they altered the way that Godsticks deliver their music and am happy to report that they retain the role they had on the albums, coming to the fore when required but maintaining enough distance so that the impact is felt when they appear.  They interpret what already exists rather than introducing too many new elements.  For me, keys are a nice if not essential addition to the live band but it’s good that the use of piano, which has become an integral part of the Godsticks’ tapestry, is still there.

The sound was a little bass heavy to start but this was soon rectified, however it remained slightly muffled and Charles’ vocals could have been pushed up a little.  No biggy though.  Having spoken to Darran a couple of weeks ago he mentioned that trying to get the balance right with the addition of the keys could be a problem but they weren’t far off tonight. 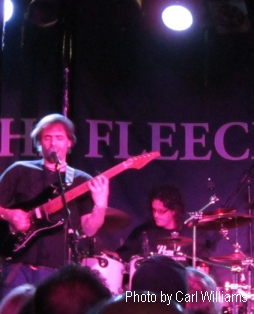 The beauty of Godstick’s material is that it has hooks that stick in your mind – I often find one flowing into my consciousness and it stays there all day – but also have the fiddlyness and dynamics that can keep the most ardent of prog fans interested.  I’ve always found them a unique proposition but with their growing confidence as a live act I suspect that there will be no stopping them after the next release.  Darran was in fine voice tonight and the band played really well to a deserved warm reception from a full and supportive crowd.

The concise set picked some of their best numbers but there are plenty more where those came from and it can’t be long before they can embark on a tour such as this as headliners.  Hopefully these shows will give them more of the exposure that they deserve – full houses are hard to come by in this genre and gigs like this are the showcase that this quality and unique band need.

If you’re going to a show, make sure you get there early enough to catch Godsticks.

To a cheer, The Aristocrats arrive on stage at around half past 9 and spend the next two hours or so lifting the roof of a now packed out Fleece. 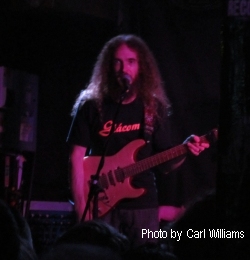 From the off there is a joyous musicality to what The Aristocrats do.  You get the impression that they’d be doing this on their nights off or if it was just them in the room as they clearly love what they do so much.

The band is well named – given more spice as it is actually taken from a classic piece of tasteless humour – as these guys are the aristocrats of their various instruments.  Guthrie Govan has been wowing audiences for years now, most recently as an integral member of Steven Wilson’s band, his quicksilver runs making him the most fluid guitarist I’ve ever seen, taking elements of Al DiMeola among others and morphing them into a ridiculously skilled style of his own, defined but without barriers.

Stage centre sits Marco Minnemann – so far above the top of the tree when it comes to drummers that he must have sprouted wings.  An astonishing talent, it was an absolute privilege to see him play in the intimate environs of such a small venue.  He hardly stopped smiling throughout the whole show, his infectious enthusiasm a joy to behold – this show is not an excuse for furrow-browed muso noodling, more an explosion of pleasure and a desire to play.  In this setting all three have found co-conspirators who are on the same page with the same outlook and willingness to make it fun, both for themselves and the audience.  Marco’s kit isn’t the gargantuan beast of the Portnoy’s and Mangini’s of this world but what he does with it is simply mesmerising.  In fact he even managed to play the pillars holding up the roof of The Fleece as well as the lighting rig above his head.  I for one am so glad that he didn’t get the Dream Theater gig – he’s just too good and would have been stifled within the rigid constraints.  As it is, The Aristocrats must be just about the best way there is to experience a fired up Minnemann in full flow. 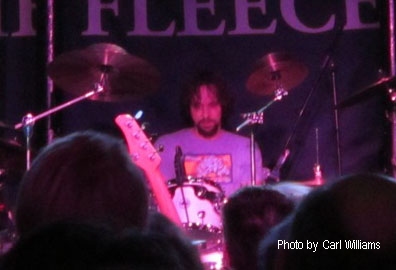 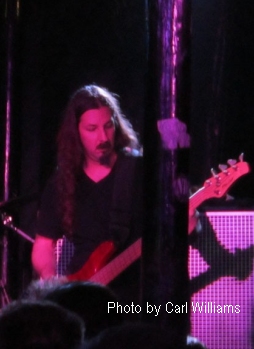 Although all take part in the announcements between songs – usually to hilarious effect – bassist Bryan Beller is the de facto MC, his engaging and humorous asides immediately getting everyone on side.  His bass talents are, like his colleagues, beyond description for a mere mortal like me.  Awesomeness oozes from every finger and he gives the music the necessary funk to drive it along.  Individually each player is awesome, together they somehow manage to exceed expectations – truly greater than the already great individual parts.

And Minnemann successfully puts to bed the common misconception that German’s have no sense of humour!

Guthrie comes across as very polite and correct, as evidenced in Minnemann’s hilarious description of how the title to the track ‘Ohhhh Noooo’ came into being (an equipment related accident that would have had the others in the band ranting and cursing).  The now legendary plastic squeaky animals made an appearance, two of the chickens being replaced by pigs this time, Beller choosing to retain the traditional farmyard foul.  Near the end of the show the ‘phones come out for a trio representation of quirky beats and bleeps and it’s this kid of quirkiness and off-the-wall hilarity that made the evening so special.  They know they can play but there is a humility to the proceedings; they’d be doing this for a laugh and the fact that people turn up and pay good money to see it is just a bonus and they appear genuinely grateful.

Innate musical understanding, each of the players squarely on the same page – a perfect storm of talent, intent and personality, this was the most wonderful display of skill coupled with fun that I’ve ever seen on a stage.  From the first few seconds of opener ‘Furtive Jack’ people are looking at each other and shaking their heads in disbelief.  We get the countrified boogie of ‘Louisville Stomp’, the f*cked up Blues of ‘Blues F*ckers’, the confectionary-based naughtiness of ‘Erotic Cakes’ and much, much more.  Including a ballad – but only one (must be said in a French accent).  Stunning.  All of the tracks are individually composed with credits spread evenly around the band but they really come to life when the three of them start to play.  As Beller commented, they have all been part of very high profile bands but this is their home. 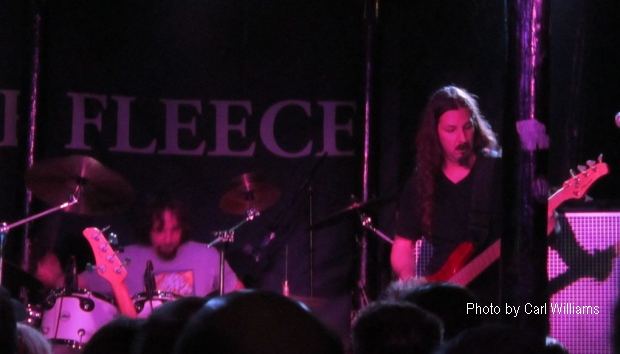 The audience were fantastic throughout, very supportive of Godsticks who played to a large crowd, and absolutely loving everything The Aristos did, showing their vociferous enthusiasm throughout.  Nice to see a packed house on a grey Tuesday night in February and future dates on the tour already appear to be sold out.

When Beller asked for a show of hands it became apparent that musicians made up the vast majority of the audience, however don’t go thinking that The Aristocrats are just for musos and people who can’t talk about anything other than technique and kit.  They aren’t.  As pure entertainment goes this was one of the best gigs I’ve ever had the pleasure of attending.  I’d see them again tomorrow – and the next day – given the chance.  As it is I just feel lucky to have seen them at all.

A spellbinding performance that never dropped below gripping; laugh-out-loud moments coupled with jaw-dropping and super-human technique with the added bonus of bags of melody played by people who inherently understand the music – it all left the packed audience of about 300 in the Fleece stunned.

This is why I’m prepared to drive 100 miles after a hard day at work and get half a nights sleep.  This is what makes all of the time and expense so worth while.

If you live anywhere near a venue on their current European jaunt over the next few weeks, miss them at your peril.

LINKS
The Aristocrats
Godsticks
The Fleece