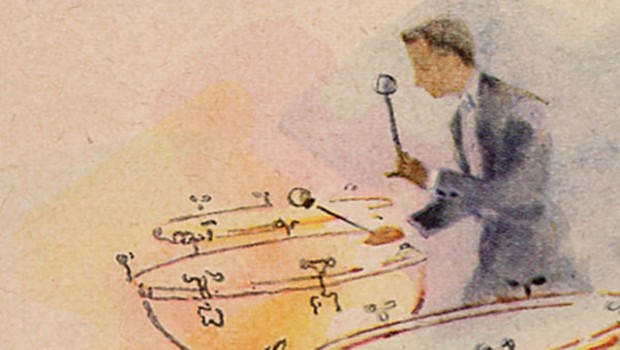 It is with great sadness that we report the passing of composer, percussionist and multi-instrumentalist John Orsi. Perhaps not a familiar name in progressive circles, but John was a fantastic musician and a thoughtful man. John recorded under several ‘project names’ and I had the pleasure of reviewing several of these albums. Always absorbing and beautifully executed, even if on occasions I didn’t quite “get it”. To his credit, John always took the time to send a hand written thank you note…

On her excellent website, Fire of Unknown Origin a fellow colleague of mine, Raffaella Berry, has written this fitting tribute to John…

“Yesterday, during my customary early morning ritual of checking my Facebook news feed, I came upon a piece of news that filled me with deep sadness – something that, at least subconsciously, I had been dreading for a while. An outstanding musician and wonderful human being whom I had had the privilege to befriend – albeit without meeting him face-to-face – had passed away suddenly, leaving this world quietly, like the true gentleman he was.

My first encounter with John Orsi will be forever tied to the beginnings of my “career” as an official reviewer for a long-established website, with which I collaborated for slightly over one year. Knitting By Twilight’s An Evening Out of Town was the first album I reviewed for that website, choosing it from a bunch of other CDs because of its title and lovely cover artwork – and also the fact that the band hailed from Providence, the home town of one of my favourite writers, H.P. Lovecraft. The music did not disappoint my expectations, and I gave the album an enthusiastic assessment, accompanied by a high rating. Before that, most of my reviews had dealt with relatively high-profile albums in my collection. When, a couple of months later,  John sent me a note of thanks, I had my first inkling of the importance of those reviews for people who make music out of passion, juggling their calling with the demands of everyday life. In the following years, I had the opportunity to  review three albums in which John was involved – Incandescent Sky’s Four Faradays in a Cage, Knitting By Twilight’s Weathering, and finally his own solo effort, A Room for the Night.

After that first contact, John and I occasionally wrote to each other in the old-fashioned way – by using pen and paper (in my case, my handmade cards, which he loved). We found out that we had many things in common besides music – art, literature, cats, good food, and, of course, our Italian roots. Then, at the beginning of this year, he told me he felt the need to withdraw from the social media scene. The last I heard of him was in early February. I sent him a card for his birthday in July, but, when I did not hear anything from him after that, I started getting worried. However, I respected his need for privacy, and did not try to contact him – something that I now regret deeply.

In this time of the year we remember the birthday or the passing of many influential artists who are not with us any longer – such as Jimi Hendrix, Jaco Pastorius or Frank Zappa. Though John was nowhere as famous as those icons of modern music, he was passionate about his music and forged his individual path without caring about commercial success. His skills as a drummer and percussionist were as remarkable as they were understated, and each of his recordings highlights his love of percussion instruments of any description, which he used not just a rhythmic backdrop, but by giving them a voice of their own.

Although I will always regret not being able to meet John in person, I will cherish our friendship and remember him not only through his words, but also through his music. Therefore, I urge all my readers – especially those who love atmospheric instrumental music – to check out the albums mentioned above, as well as the rest of John’s output on his own label, It’s Twilight Time, as a way of celebrating his love for music and life –  though the latter was cut off way too soon.”