Progzilla Radio continues to be ruinous on my bank balance, another recent discovery being Fluctus Quadratum. Formed in 2019 in Heathfield, East Sussex, the sound is centred on synths and other keyboards, courtesy of a young man by the name of Jopheus Burtonshaw, very ably supported by his musically-experienced father Rick on drums. The story of the band’s formation is compelling. I always like to know a bit about the genesis of new bands as it’s simple historical facts that very often set the scene for how a band develops. I thought it significant that Phil Collins started out his public life as an actor, in particular in roles such as the Artful Dodger in Oliver, before making his global name in Genesis and continuing to get bit-parts in films thereafter. It was very clear that that first foray in the theatre carried through to his band career.

Perhaps surprisingly, it was not Rick Burtonshaw who was the seed behind this band but nuclear fusion obsessed son, which translated into an obsession with the keyboard sounds from prog greats such as Keith Emerson, Rick Wakeman and Mark Kelly, to name but a few. Jopheus soon developed a skill for keyboard composition and his dad’s encouragement led to the band’s creation, added to with bass player Mark Piercy. With some brief festival exposure under their belt, Curtis Adamczyk joined on vocals in May 2022. Where does guitarist Alan Trower fit in…? 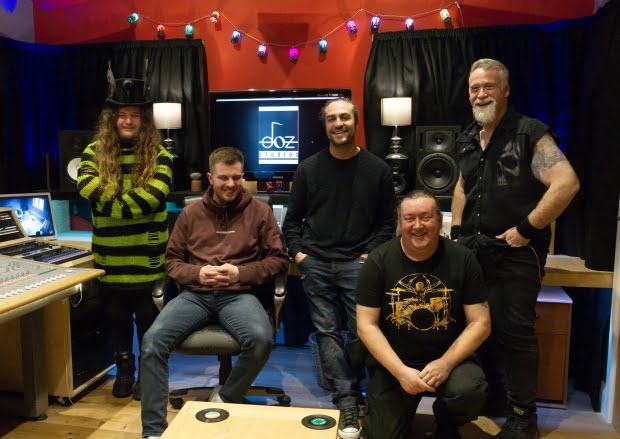 So, what of the sound and style? The band explain that their aim is to revisit “the serious progressive rock era, with a considerable modern twist”. A contentious or provocative statement if ever there was one, but nonetheless very intriguing and it clearly got my attention. They hope to be likened to “the sweeping riffs of Pink Floyd, the technical ability of Marillion and the modern soundscapes of Steven Wilson”. Some flesh on the bones of their opening statement, but I tell you what, they might be right.

This EP, three songs of good progly length, between 7 and 15-minutes and a total length of 36-minutes, is their first salvo into the world of Modern Prog. It’s pretty good, I’d say, and I’m clearly not alone when one sees the likes of Steve Gould, promoter of the truly excellent Fusion Festival in Stourport, offering them a slot at his 2023 festival. Steve knows his onions and only signs the best, either established or upcoming. I think those attending this annual pilgrimage who are not familiar with Fluctus Quadratum will be in for a bit of a treat.

The EP opens with the 15-minute Portalis, featuring a very futuristic synth sound and confident bass line before the vocals start. It could almost be a cinematic soundtrack and has the ingredients of some early ’80s neo-prog akin to bands such as Pallas. The mood changes to Floydian guitar with underlying deep synth and if one could isolate the synth sound, I’m sure I would not be the only person to sense a Jean Michel Jarre influence. There is lots to like here and it will be interesting to see how young Jopheus flits between the varied soundscapes when they play live. The final third of the track gives way to acoustic guitar, delicate vocals and melodic keys which will garner the attention of many a prog fan. It’s quite an emotional piece with lyrics evoking some troubled times but with a sense of hope: “Run from everything, run from life, run bitterness, run out of sight…” and “Let it fade, all this pain you’ve bottled up, let it fade away, run towards the sun again”, before building to a beautiful piano close.

Acquiescence II is a synth lover’s dreamscape; Edgar Froese and his erstwhile colleagues would have loved this piece. It’s the shortest track on the EP, and hence very accessible. Curtis displays huge emotion in his vocals across a wide register and Jopheus gets his chance to shine with piano solos before the familiar space-like synth rhythm takes centre-stage. There’s a lot of prog banter out there at the moment, both in the press and amongst the fans, which has hugely widened the scope of what progressive music really is, but this track really is a return to the ’80s vibe and I think it will be a crowd favourite.

Convergence sets out with multi-layered keys and moody spoken word telling a story befitting of Steven Wilson; it’s very cinematic in tone, with long soaring guitar notes and some folky guitar, or is that a harpsichord patch I hear? There are some very enjoyable sections but, as a whole, there is a feeling of over-indulgence, perhaps even that the sections are a bit disjointed. I am left wondering whether this track would have been even better if it had been a little shorter?

I’m a big fan of long form tracks, but I fear that the two lengthy tracks might be seen by some as a bit laboured; it is a very minor criticism and should not decry from what is a very fine debut indeed. The band should be very proud of what they have achieved as there is a lot of promise here for the future and this is a very encouraging springboard for a follow-up album. They have a challenging test ahead of them at the Fusion Festival on 4th March 2023 (with Ben Ellis taking on the guitar role), but this is a great opportunity for them to shine as one of the new old-school prog bands to hit the scene in front of a large and very discerning audience. I, for one, will be listening intently.