I love The Tramshed. Not only is it a very nice space, the staff are the best I’ve ever experienced. It’s a pleasure to roll up to the door and be cheerily greeted by all the stewards – every time. Keep doing what you do everybody, it is appreciated.

It’s a chilly Wednesday evening, but there’s a good turn out to see this rescheduled date as Magnum celebrate the 50th anniversary of the band’s foundation. A packed evening features two other bands before the main event…

Theia are an unusual two-piece band of brothers from Burton-upon-Trent who describe themselves as the ‘bastard sons of Royal Blood and Twenty One Pilots’. I don’t know the latter, but the former work for me so it promised to be an interesting half-hour of so. And indeed it was; they have loads of energy and some damn fine songs, the sound padded out with backing tracks, effects and other triggered stuff which all adds up to an entertaining set. With Kyle Lamley out front with guitar and vocals, drummer Ash Lamley lashed his kit in a straightforward but effective fashion. Both brim with confidence and happily engage with the crowd, with a good line in both humour and audience reaction cue cards. Putting lots of effort into warming up the crowd, these two deserved their place and it was nice to see something a bit different.

Vega have been around since 2009 and are without a doubt a quality act, putting on a fine show of melodic rock. In a change of formation they are currently a quintet, having lost a keyboardist (supplanted for the time being at least by backing tracks) and changed the bassist, but there is plenty of energy coming from the stage as singer Nick Workman leads from the front. 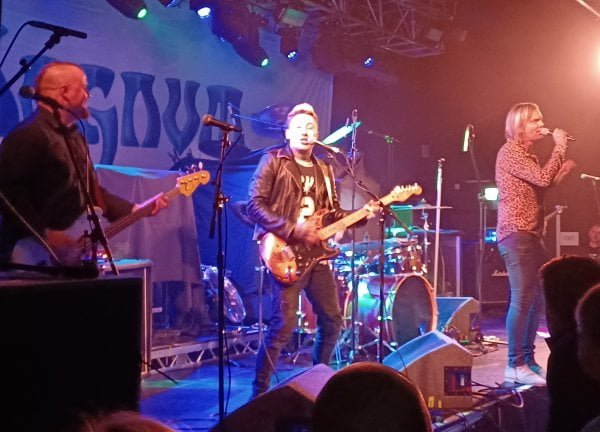 An engaging presence, Workman has a fine voice that certainly lifts an already impressive set of songs. The band are very tight and work the crowd well, lead guitarist Marcus Thurston adding some fine solos while the whole band contribute to the backing vocals. Ending with an unexpected cover of Def Leppard’s Animal, all in all, it’s an excellent performance and they get the rousing response that they deserve.

You really can’t ignore a back catalogue of songs as impressive as that available to Magnum, across what is now twenty-two studio albums. They continue to regularly release new material, including this year’s The Monster Roars, and the first half of the 90-minute set is almost wholly comprised of recent material. All of it is thoroughly enjoyable, despite me being shamefully unfamiliar with a lot of it, and the songs that continue to emanate from the pen of arch songsmith Tony Clarkin keep hitting the mark. Clarkin has been the band’s sole writer since the beginning (except for a brief period around the controversial Goodnight L.A. album where record company pressure for commercial success saw some co-writing) and is one of the great hard rock song writers, imbuing all of his work with power, depth and melody. 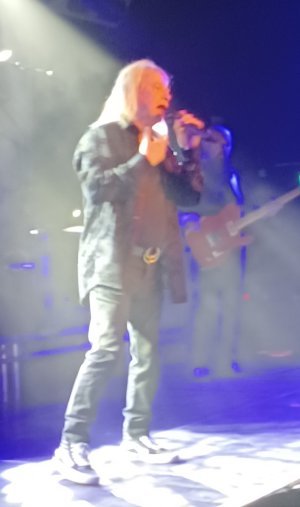 The band are in fine form, the new additions on bass, drums and keyboards over the last five years or so doing a fine job, and with a very impressive sound – detailed and not too loud – the set rolled along magnificently. Having not seen Magnum in about twenty years, it shouldn’t have come as a surprise how much older singer Bob Catley appears, and initially it was quite disconcerting seeing the now 75 year old jumping up and down and pulling off all the front man moves of old, however he remains one of the best in the business and worked the crowd relentlessly for the entire set. His voice is obviously gruffer these days but he can still hit most of the notes and delivered the songs beautifully throughout, the quintessential focal point as Tony ‘No Longer the Hat’ Clarkin quietly enjoys plying his exceptional trade off to one side. Clarkin is 76 but you wouldn’t know it and he’s note perfect throughout, even deploying regular grins as he basks in the glory of the ecstatic reaction to his songs. As Catley announces during his introductions, they wouldn’t be here without him.

From the opening blast of a spry Days of No Trust (from 1988’s Wings of Heaven), the new songs shine brightly and powerfully, following up with the title tracks of three of their most recent releases, Lost on the Road to Eternity (2018), Dance of the Black Tattoo (2021) and The Monster Roars (2022), and others from the latest and 2020’s The Serpent Rings. The quality of the material is a resounding endorsement of the standard that Magnum have maintained in recent years as they’ve continued their successful collaboration with the SPV label. 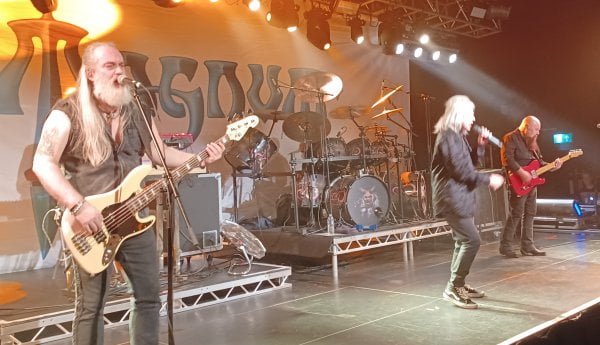 The first half also takes a dip back to 1992 for The Flood (Red Cloud’s War), but the rest of the set concentrates on the band’s glory days, featuring another from Wings of Heaven in Wild Swan, the title track from 1986’s Vigilante, the bluesy swagger Rockin’ Chair from Goodnight L.A. (to which this track added some grit, and is even more appropriate now as the main protagonists’ years advance) and a stomping All England’s Eyes from the classic On A Storyteller’s Night. That album also provides the most poignant song of the evening in a wonderful rendition of Les Morts Dansant, Catley ringing the emotion out of Clarkin’s words, as he has done for half a century. 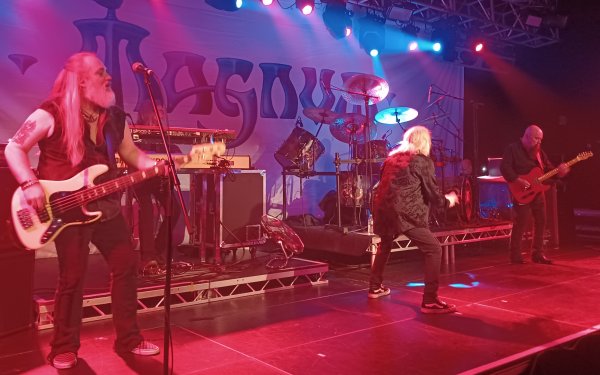 Catley leans into a large fan, his grey hair blowing behind him – no doubt both to cool down and prove that his hair remains very much his own – while the rest of the band diligently go about their business: Rick Benton’s keyboards are a mainstay in recreating what has always set Magnum’s songs apart and accentuated their progressive edge, Dennis Ward’s bass is clear and dextrous, with backing vocals strongly supporting Catley’s lead, and drummer Lee Morris brings the power and crisp energy to drive it all along. 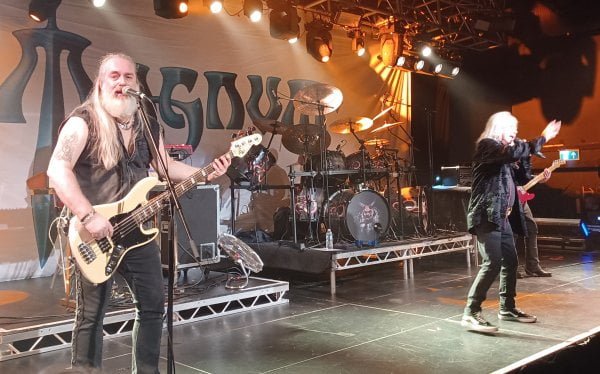 The inevitability of the encore was only enhanced by the trio of songs deployed; three classics from the early days along the road to genuine chart success, and again picking out some choice title tracks. Kingdom of Madness was an early favourite of mine when I discovered the band in the mid-’80s, and it is wonderful to hear it again. Following it up with On a Storyteller’s Night and Sacred Hour, from 1980’s Chase the Dragon, was the perfect end to a truly entertaining night. 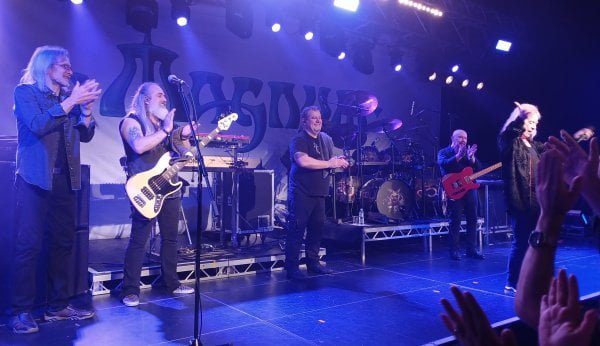 SETLIST
Magnum
Days of No Trust
Lost on the Road to Eternity
The Monster Roars
The Archway of Tears
Dance of the Black Tattoo
Where Are You Eden?
The Flood (Red Cloud’s War)
The Day After the Night Before
Wild Swan
Les Morts Dansant
Rockin’ Chair
All England’s Eyes
Vigilante
~ Encore:
Kingdom of Madness
On a Storyteller’s Night
Sacred Hour