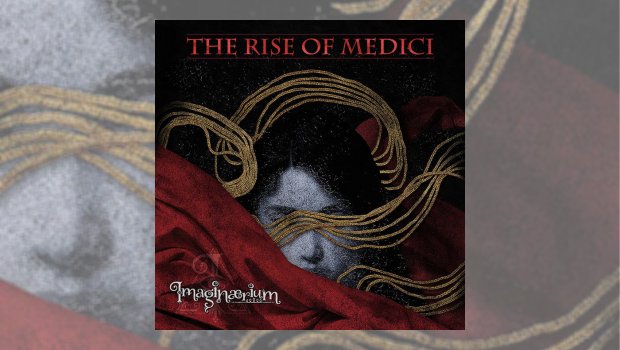 Imaginærium – The Rise of Medici

I think this has been the hardest review for me to finish. The album itself is well out of my usual comfort zone, and realistically the reason I took it on for review is because Eric Bouillette was so clearly proud and excited for its upcoming release. The likelihood was, I guess, that it might be the last of his music that he would be around to see the release of. So with Eric’s passing, much of my reason and desire to write the review was gone. I had already let him know what I thought of the album. I had hoped to finish the review in time for him to read it. My review has languished half-finished since Eric’s passing. I considered passing the album onto one of my colleagues, because I was unsure if I would ever be able to finish this review. But I feel I owe it to Eric to complete what I’ve started, and also to the rest of the talented artists who have contributed to Imaginærium’s impressive debut.

As aforementioned, The Rise of Medici is outside my comfort zone. There are still some aspects of the album that I find hard to get on with, but what struck and astounded me from the very first listen was just how much I enjoyed listening to this album. And from that first listen, the earworms had already dug themselves deep into my brain. There are several melodies from the album that I will find myself aware of humming or singing along to at all times of every day. I’m not sure there has been a day since I first listened to the album that one of these melodies has not accompanied me at some point. That remains the most impressive aspect of The Rise of Medici, as I cannot recall a time (if ever) where an album has so worked itself under my skin.

Essentially, The Rise of Medici is a rock opera, which is enough to send shivers through the spine of many (including myself). It is all too easy for such a concept to fall into realms of great cheese and corn, more deserving of the term bombastic than most prog reviews that use the term are. While a certain degree of bombast tends to be expected, even welcomed, in the realm of prog, calling something bombastic in general usage is a criticism. It implies a theatricality more powerful and staged than is present. Style over substance. Pretentious and pompous twaddle. Grandiloquent and grandiose nonsense. And, honestly, there is definitely some bombast here – but it’s simply overpowered by the majesty and gravitas with which it is delivered, and in almost every case, easily forgiven.

The vocal talent on this album is phenomenal, with great individual performances that are taken to the next level (and beyond) when they sing together. It is the vocals that provide most of the bombast – but listening to the interviews at the end of the bonus disc, Laura Piazzai is even more bombastic when she speaks than when she sings, so it would seem almost inevitable that the vocals are as expressive as they are. I have to say I prefer the vocals of Andy Sears and Elena Vladyuk, to those of Clive Nolan and Laura Piazzai, simply because they don’t take their performances so far into theatricality. And, in fact, I really struggle with Clive Nolan’s performance, as he is trying too hard (for my liking) to play the villain, and it becomes cartoonish. It is somewhat reminiscent (to me) of Jeremy Irons in The Lion King, but that worked because he WAS a cartoon villain. Clive Nolan’s villainy just seems a little out of place – though no doubt it is perhaps the most rock operatic voice, and if this were performed in a theatre, maybe I’d think his vocals were wonderful? I don’t mean to be as harsh here as I possibly come across. Clive Nolan has a really good voice. His stylistic choice on this album doesn’t work for me, but I am sure a lot of people will love it!

It is interesting to hear the alternate versions of some songs on the bonus disc as they can sound startlingly different, and many of my problems with the album are addressed on the bonus disc – including the singing style of Clive Nolan! Even after many, many listens, I still cannot easily choose which versions of the songs I prefer. Normally a bonus disc gets one or two listens, and is rarely (if ever) listened to again – but I listen to the bonus disc as often as I do the original, and I can’t see that ever changing. It’s a real treat for those that do go for the limited edition, so if there are still copies of this available, I would urge you to purchase while you can. Much of the subtleties that are present on the album can be heard more clearly on the bonus disc, where they are less subject to being over-powered by, well, the bombast. The interviews are interesting, too, and enlightening, but I doubt I will listen to those again. However, they are definitely worth listening to.

One of the aspects I most love about The Rise of Medici is Eric Bouillette’s violin playing, which is just gorgeous. It’s almost omnipresent, but never overpowering or oppressive. The violin almost acts as yet another vocal harmony – one more voice in the impressive vocal line-up of this album. It’s not the only instrument Eric Bouillette plays here, but it’s the one that he plays to the greatest effect, and one that really heightens the “Renaissance rock” sound, feel and style of The Rise of Medici. The compositions and arrangements really do give a sense of time and place, without sounding clichéd. It’s all too easy for a rock opera to fall into the realms of pastiche, and to become almost a parody of itself. The Rise of Medici never comes even close to that, and this is a strength of the album that really needs to be emphasised, in my opinion.

One of my criticisms has nothing at all to do with the music, so much as the story, which doesn’t quite match history at one point. Then again, this is a rock opera, and much like recent biopic films of musicians, is not designed to be entirely factual. Some literary licence is to be expected to make the story more powerful. In this regard, it’s similar to the bombastic nature of the vocals – a theatrical device that is more or less expected of a rock opera. And given that without the patronage of the Medici family, we would be unlikely to know opera (or even the piano) as it is now recognised, this seems appropriate, even if it rubs me the wrong way a little (just as I was by some contrary to fact details in the Bohemian Rhapsody biopic, which created a “better” story, at the expense of history).

Thus my only real grievance with the album are the lyrics to Will I Never Return?, implying that exile was a fate worse than death, and that Cosimo was not sure he would ever return. Cosimo was sentenced to death, and chose exile when it was offered. While there is no actual proof, it is presumed that Cosimo himself was instrumental in his narrow escape from execution, and certainly the involvement of his wife and “brothers in arms” (such as the monk Ambrose of Camaldoli) is recognised. Once it was a case of exile, rather than execution, that aforementioned patronage from the Medici family meant it was a case of when, rather than if, Cosimo would return to Florence. The Medici name drew strong loyalty, and Cosimo knew his patrons would follow his influence and money – which indeed they did. Florence could not afford to let Venice, where Cosimo temporarily settled, continue to prosper at its expense, and inevitably invited the exiled Medici to return. Again, I have no real issue here, and I can totally understand the choice made with the lyrics. Like my ambivalence to Clive’s style of singing on this album, my reservation here is purely individual and personal, and I’m sure most listeners won’t be worried by it at all.

Any criticisms I have of The Rise of Medici, then, are trivial and subjective. For an album I wasn’t sure I’d enjoy at all, I enjoy it immensely. It’s not going to convert me into a rock opera fan – and it’s still outside my comfort zone – but Imaginærium prove with this album that is it definitely sometimes worth looking beyond that comfort zone. The Rise of Medici is strong enough that I’m surprised to admit it might be one of my favourite releases of 2022. For those already more predisposed to listen to, and like, this sort of music, it should top your list! If The Rise of Medici is not at the top of several album of the year lists come December then it will only be because it has flown under the radar. I hope that this will not be the case, because this is an album that absolutely deserves to be heard.