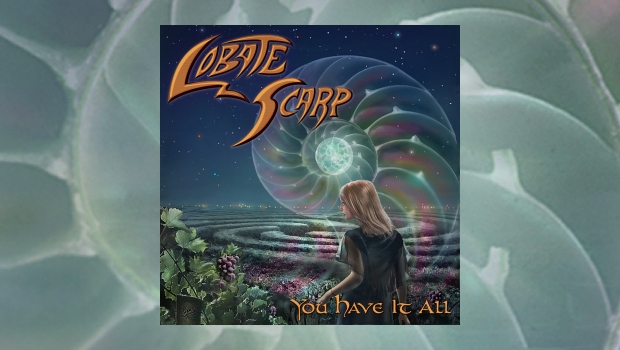 Lobate Scarp – You Have It All

The old proverb that ‘Good things come to those who wait’ couldn’t be more appropriate for You Have It All, the superb second album from Adam Sears and his Lobate Scarp symphonic prog project. 10 years since the band’s debut, Time and Space, the lengthy gestation period has yielded pure symphonic prog rock gold, with a sound which merges elements of classic-era prog, such as Yes, Camel and Kansas, with the more modern influences of American bands such as Spock’s Beard, Neal Morse, Glass Hammer, Circuline, Echolyn and IZZ, amongst others. Their Los Angeles origins date back to 2006 – so Adam definitely doesn’t like to rush things out!

Over nine tracks – including two lengthy proggy epics – Adam, with the help of over twenty fellow musicians, has produced a wonderful, vibrant, diverse and grandiose album of symphonic prog rock with touches of neo-prog, that melodic and symphonic prog fans should lap up. With an underlying theme exploring various spiritual themes and encouraging positivity within the creative process, the album has a deep and refreshing resonance with our lives, not least by our many moments of self-doubt, and a sense of being stuck where we were, during the extended pandemic of recent years.

As with the debut release, Adam wrote the music and lyrics and handles the lead vocals and keyboards with aplomb. He is joined yet again by Andy Catt on bass, but this time it is Peter Matuchniak who contributes most of the guitar parts. A string quartet and other classical musicians add freshness to the instrumentation, and there is a wealth of guest artists on drums, guitar, vocals, keyboards and even French horn. Even co-producers Rich Mouser and Steven Leavitt contribute to the overall soundscape envisaged by Adam – and overall, all the musicians slot seamlessly into the mix and produce a coherent and entertaining synergy that drives the music forward.

The album kicks off in bright fashion with Conduit. Eric Moore’s opening drums take us into a jaunty, Transatlantic-like instrumental concoction of guitar, bass and swirling keyboards. Andy’s bass lines work effectively, and Ryo Okomoto (of Spock’s Beard) adds some of his trademark flourishes, with Peter’s guitar dipping in and out continually to great effect. Violins, viola, cello and horn also add to the balance and complexity of the music. There’s even a funky edge at times and, overall, the track sets the tone well for the rest of the album.

Nothing Wrong, by contrast, starts with atmospheric Floydian keyboards and a psychedelic Kashmir feel from Rich’s dilruba. A sinister bass rhythm heralds in staccato strings, with hushed vocals from Adam, before the track takes off with the defiant refrain “Nothing wrong with my life” and powerful guitar contributions from Hoyt Binder, whilst Mike Gerbrandt’s drums keep it all moving. Keyboards swirl through the strings and add to the dark, more oppressive mood of the song. Originally appearing on 2019’s Spirals and Portals EP, the new mix certainly hits the spot.

In the Night I is a gentle keyboard and viola-led instrumental, acting as a mood-setting interlude – reprised later on by In the Night II, with the addition of vocals. However, more substantial is Life-Line. Jimmy Keegan (of Spock’s Beard and Pattern-Seeking Animals) drives the beat, supported by Andy’s bass lines, with some delightful interplay between chiming electric guitar and symphonic keyboards. There is an Alan Parsons Project feel to the vocals and music at times, and Peter delivers some quality electric guitar soloing through to a climatic ending.

The epic title track, You Have It All, twists and turns wonderfully. Starting with strummed guitar, bass and strings and nicely undulating drums from Eric (something he maintains throughout). Adam soon delivers the catchy vocal chorus “You wanted more, but now you understand you have it all” before the song opens up more fully, with instrumental light and shade. Well-judged acoustic guitar from Rich hands over to melodic electric guitar runs from Peter, with both Jon Davison and Billy Sherwood (of Yes) adding their guest vocals. The track gradually builds up the intensity, whilst oscillating and soaring symphonic keyboards mingle with the Kansas-like strings and more riff-driven guitar towards the end, through to the final refrains of “You have it all” and a satisfying finale – including a cheeky flourish at the very end. Symphonic prog fans will find much to enjoy here.

Beautiful Light originally appeared as a 2016 single and then on the Spirals and Portals EP, and is an enjoyable, commercial slice of accessible AOR and soft prog, with acoustic guitar and viola adding sparkle to well-integrated keyboards and electric guitar from Nate Olmos. Mike once again keeps the beat nicely and Adam’s vocals give it an uplifting conclusion – with a hint of Spock’s Beard Ted Leonard in his delivery. With its positive message encouraging people to stay hopeful and keep pushing for – and seeking – the ‘light’ of their dreams, it has a real feel-good factor.

Our Test Tube Universe starts languidly with swaying bass and Jimmy’s stomping drums before dancing its way through an increasingly intense, heavy and dynamic amalgam of keyboards and guitar, with Adam’s vocals adding emotion to proceedings. A mid-point Eastern-sounding respite with piano, Mellotron and keyboards sets up some effective tension, before the track resets and we get a full-blooded conclusion with very effective vocal harmonies. Ryo’s keyboard contributions once again add some dazzling light and the track struts through to the final bass and drum notes. Adam tells me the lyrics consider the creation of things, not least ourselves, and imagines what if our creator was a scientist who made our Universe in a lab – and given our tiny size in that vast Universe, how would he ever know we exist or that he created us? Deep thoughts to match the music, for sure.

The closing epic, Flowing Through the Change, is a real tour-de-force and most clearly identifies with the pandemic journey and changes we all experienced during that time. Structured into five sections, each has its own character. Bright synthesisers, setting the track’s recurring musical theme, are soon joined by Eric’s fast cymbal ride and then some powerful guitar passages and keyboards in Futureflow, before an atmospheric In the Night III flows subtly into the more expansive and symphonic Dreamflow – with a soaring guitar solo to begin and then keyboards and strings, prior to the guitar and keyboards stepping up the intensity and complexity. Adam’s keyboards take centre stage here, with Peter’s guitar playing a more supportive role at times, but still adding neo-prog and cinematic touches. A New Beginning brings in an uplifting feel, with glorious synths, and Adam’s upbeat vocals contributing to the optimism, before the rich, dynamic and inspirational Dreams Are Coming True concludes the epic in true symphonic prog fashion.

Largely recorded and mixed at Rich Mouser’s Mouse House Studios in Altadena, California, those production echoes of Spock’s Beard, Transatlantic and Pattern-Seeking Animals are perhaps understandable – but Lobate Scarp definitely have their own majestic, symphonic prog sound, with light and shade throughout.

Released several months ago, You Have It All by Lobate Scarp is a symphonic/neo-prog prog album I am very pleased to have subsequently discovered this summer and been able to review and highlight here on The Progressive Aspect. Adam Sears and his fellow musicians have produced a real gem of an album that deserves a much wider audience in the melodic and symphonic prog community. With more general streaming planned from October, I do hope its melting pot of complexity and accessibility, intensity and delicacy is discovered by many more listeners in the months to come. Highly recommended – and already one of my albums of the year!

…and hopefully it won’t be another ten years before the third album is released, Adam. Some of us are getting on a bit!

[Note: ‘Lobate scarps’ are curved, lobe-shaped, stepped cliff structures found on the surface of the Moon and Mercury amongst others (for those geologically curious prog fans out there!)]