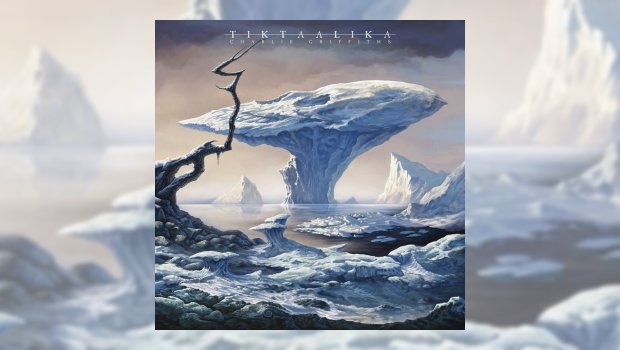 The Tiktaalik, discovered in the Canadian Arctic in 2004 by fossil hunters, was a freshwater fish living around 375 million years ago in the Devonian period, but bearing many characteristics found in four-legged land animals that would follow. It is thought to be an important missing link in the story of evolution as animals moved from the oceans onto land. Charlie Griffiths, guitarist with Haken, has taken this story as the inspiration behind his first solo album, Tiktaalika, and listening to the first few minutes, it is clear why he added an ‘a’ to Tiktaalik. From the opening gently strummed guitar to the slow crunching chords, then the galloping thrash romp, the prime influence is pretty obvious! But that’s just the two-minute prelude, and there is much more to it of course than recreating his own ‘Master of Fossils’!

Tiktaalika finds Charlie playing almost everything, guitars, bass and keyboards and even singing, but sensibly he has enlisted help to raise this album to the next level. Most importantly, he has recruited a proper drummer, and what a drummer – Darby Todd is a monster. His awesome playing is pivotal in driving the record forward. For the avoidance of doubt, this is a prog album. The complexity, tricky time changes, and tight stop-start riffing attest to this, as does the conceptual flow of the record, the segues between songs resulting in a seemingly continuous piece of music. That’s Prog for sure right there! But it’s also a brutally heavy metal record, and Todd’s rock solid drumming is an essential ingredient.

The other sensible choice Charlie made was in utilising seriously great vocalists. Not that his vocal efforts are poor, but some of these songs were crying out for top notch singers, and that decision has paid off handsomely. Tommy Rogers (Between the Buried and Me) is first up, and he is perfect for the first song proper, Arctic Cemetery, recounting the discovery of Tiktaalik in the frozen wastes. Tommy alternates between clean and harsh vocals, which totally suits the music and subject matter. Will some people baulk at harsh vocals? Yep, probably, but that would be a shame because it’s absolutely right for this music, and is only a tiny proportion of the vocals overall, but I remember the fuss some made over the short growly section in Haken’s The Architect a few years back. Well, each to their own. To my mind, it’s a perfectly valid ingredient. The primeval flavour of these sections conjure the idea that the Tiktaalik is telling its story directly, and the result is very effective.

The clean delivery for the verses contrast well, with clear melody and an almost Ghost-like accessibility to the heaviness of the song. Beneath all the monster riffing and soloing, Todd hammers his drum kit into submission with salvo after salvo of brutal battery. Then without warning, we slip seamlessly into Luminous Beings. Shimmering guitars usher us in, and Danïel de Jongh sings in almost a whisper as the atmosphere builds in tension. It’s not long before Griffiths has dreamt up another riff to beef things up again, but a jazz-prog section brings it down once more, and some lovely fluid jazzy guitar figures prove what an adventurous player he is. Heavy riffing is never far away though, and we return to the main theme, the vocals always accessible and soaring to the heavens. There are recurring themes throughout the album, further reinforcing its prog credentials, and the Crawl Walk Run theme is briefly introduced towards the end, to return as a full song at the end of the album.

If you were hoping for a pause in proceedings to catch your breath, forget it, as we slide straight into In Alluvium, one of the centrepieces of the album. There’s a rather Dream Theater feel to this piece, and Vladimir Lalić’s dramatic vocals are not dissimilar to a young James Labrie. The melodic sweep also evokes Charlie’s day job, being quite like Haken in parts. Another rather jazzy guitar break is followed by a very recognisable in style synth solo from Jordan Rudess. It’s a perfect complement to the complex rifferama of this track. Another seamless segue leads us into Dead in the Water, an even heavier song and another highlight in an album of highlights. Darby Todd gets it underway with a rolling drum pattern, then machine gun riffing as the vocals alternate again between clean and melodic, and gutteral and harsh. Again, the sense of primordial menace pervades, and the stop/start riffing is joined by sax courtesy of Rob Townsend (Steve Hackett’s band). I don’t think I’ve heard him play quite like this before, as he channels his inner David Jackson with some very VdGG parping. It is a wonderful touch adding some welcome extra texture. And very unusually for Tiktaalika, the song closes with some gentle acoustic guitar, and ends! There’s a split second of silence, just long enough for a ‘phew’!

Digging Deeper is again very close to Haken, but at their most melodic and laid-back. The riffing is put on hold for a few minutes, and this song basically acts as a prelude for the title track. Tiktaalika is a joyous instrumental guitar fest, chock full of riffs and soloing, and very much taking Metallica (Cliff Burton era) as a starting point, then taking it into orbit on a mission to stuff as much guitar into eight-minutes as is possible. The video for this is a must-see, as Charlie duels on guitars with an animated Tiktaalik in the guise of James Hetfield. It’s hilarious, and jaw droppingly good at the same time.

The playing gets more frenetic as the piece climaxes, and the final solo is outrageous. We dive from this straight into Crawl Walk Run, and we get one more dose of harsh vocals, but what a song. Brutally heavy and memorable, and played at breakneck pace. Trust me, it’s more run than crawl or walk. Without pause Under Polaris makes for a clean melodic coda, finally ending as it began with a return of the gentle strumming which opened the show 50-minutes or so ago.

Now you can breathe again and recover your composure. Whilst this album could be described as exhausting, it’s a bit like running a marathon; you’re shattered at the end, but elated at the same time. This album surely shows that Charlie Griffiths can not only play guitar with the best, but write some darn fine music. It’s the kind of album which really needs to be listened to all the way through at one sitting, especially as it’s hard to separate songs from each other! It’s a fun concept, follows Griffiths obvious love of prog metal, and is performed by some outstanding musicians and singers who make this one of the best prog metal releases of the year. I’ve listened to it dozens of times, and I’m not bored in the slightest. Highly recommended if you like your prog on the metallic side.