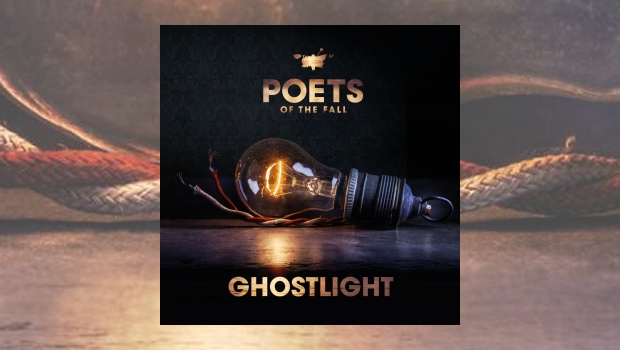 Poets Of The Fall – Ghostlight

There is something irresistibly infectious about Poets of the Fall. I had the pleasure of meeting the band in Berlin in 2012 as part of the Temple of Thought tour, courtesy of my then teenage son who’s fanatical passion for their music persuaded me to take him on his first trip abroad. We purchased the VIP meet-and-greet experience. The band were eloquent, driven by a vision which spoke volumes about their musicianship. The concert was invigorating, energising and, at the end of the evening as I picked my jaw off the floor, I wondered: why the hell is no one talking about this band?

Fast forward ten years and I remain an ardent fan. I have seen them numerous times since. They continue to plot their own distinctive musical journey which continues with the release their ninth studio album, Ghostlight. Yet the conundrum which has puzzled me since that first encounter in Berlin remains. Particularly in prog circles, whilst you do occasionally hear hushed mutterings of their name in various groups, it is always in terms of being ‘my guilty pleasure’ or ‘my unspoken secret’.

In view of the disappointing (indeed seemingly divisive) Ultraviolet (2018), Ghostlight opens with no holds barred. Opening track Firedancer wears its heart unashamedly on its sleeve, harking back to the pulsating rhythms and echoing sounds of Jealous Gods (2014). With clear parallels to that album’s opening track Daze, Firedancer instantly establishes an energy and intensity which maximises the characteristic sound of a simple enhanced keyboard layered over a deep soundstage. It also returns to the clever use of isolated instrumentation slowly combining to build layered crescendos for the foot thumping refrains.

Requiem for My Harlequin is where things start to get interesting. The figure of the harlequin has a long history in their catalogue, featuring prominently in music videos all the way back to Carnival of Rust (2006) and Twilight Theatre (2010 – cover artwork). In many ways it is a supremely apt metaphor for what they do best – great narratives, dramatic contrasts, thunderous melodies segued between passages which are calm, almost maudlin and painfully self-aware. The music is fearlessly, daringly, carnivalesque.

In Marko Saaresto they have a front man with astonishing vocal capabilities: his voice is, without doubt, something incredibly special and the force which leads as well as unifies the rest of the band. In Revelations it finally comes out to play and demonstrates, once and for all, that Poets of the Fall know how to write a bloody good chorus.

The entire song is crafted around poetic vignettes, whisps of lyrics – musical impressionism at its effective best. Unlike earlier albums, however, much more thought has been given to the structures, the transitions and to the flow of the song. There is a cautious willingness to play, to experiment, to begin to break free from the formulaic. Not only is there a rousing build up to the triumphant, demonstrative if abrupt finale but for the first time in a Poets album, the lead guitar is properly let loose to skip and dance rather than simply function as an expected in-fill.

Heroes and Villains also marks the band’s impressive ability to mix things up in terms of pace, style and mood. They have always done ballads with deft emotional aplomb and Heroes and Villains excels in painting nuanced sentiment with beautiful delicacy. The pace is well judged to match the mood, and here another new twist emerges where the story itself is allowed to dictate the interlocking musical twists and interweaving melodic turns. It is a thing of beauty and marks a discernible evolution in the direction of the band.

Despite the welcome return to form, not everything works. The album generally veers toward being a tad ‘ballad heavy’. Sounds of Yesterday is pleasant enough, stretching Marko’s vocal range, but the band are playing well within themselves. Lust for Life is a great story but unfortunately an all too comfortable echo of many of the slower, acoustic guitar driven songs which have gone before. The central guitar solo is certainly moving but alas entirely obvious. Too sugary sweet. Chasing Echoes wants to break free and become something special but ends up being largely pedestrian and ‘by the numbers’.

These, however, at least show a new signal of intent from the band to begin to fully explore the directions in which their musical journey may take them. Is it prog? Possibly not, but I’ll argue you over it. Do I care? No. Is it my ‘guilty’ pleasure – hell, no. When music can make you forget yourself, transport you to another place, embrace you, sweep you up, hold you close and not let you go – then hell, it really doesn’t matter. Enjoy it. Live it. Lose yourself in it. These moments don’t come along that often.

Tags: Poets of the Fall