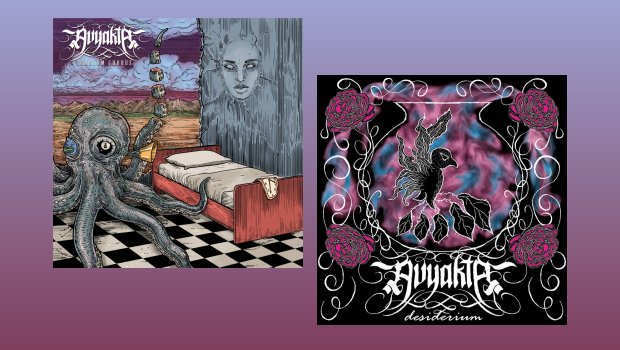 Why should I introduce Avyakta, when the man himself does such a good job? From Avyakta’s Bandcamp page:

“Avyakta is a Sanskrit word meaning ‘devoid of form.’ In other words, something without limits. It is a one-person music project — the dream child of Jesse Agins. The intention of this project is to experiment with music in whatever incarnation it might take.”

‘Devoid of form’ would suggest the kind of drone music and krautrock we heard from bands like Cluster and Tangerine Dream in the ’70s, but this isn’t true at all for Avyakta. Instead, Agins describes the project – accurately – as:

“Aggressive, yet melodic ‘prog-punk’/metal influenced by progressive rock and experimental music to create a simultaneously heavy and psychedelic dreamscape of music.”

These songs, varying from one minute in length to thirteen, will change tempos, instrumentation, mood and even genre on a dime, and rarely is the same theme visited twice, for better or worse. Mostly instrumental, the entire thing is performed by Jesse Agins, which does make this an impressive endeavour. While Desiderium is Avyakta’s sophomore release this year, it felt only right to include a review of 2020’s Somnium Chorus as well.

The debut album opens proper with The Fortune Teller and we’re given a taste of Agins’s musical style; distorted guitars, busy drum patterns, unusual rhythms. It’s progressive but not off-putting; not to the seasoned proghead at least. With a laid-back middle section, the piece races towards the finale. An Ominous Oracle starts aggressively and after a while floats into a dreamy sequence featuring dulcet saxophone notes before returning to the original explosive pace. Remembering that all the instruments are played by Agins makes the inclusion of the sax all the more impressive.

After another dreamy interlude, Lost Carcosa blasts onto the scene with keyboard runs. A leg-aching run of double-bass patterns ensues and the track becomes murky with only bass instruments playing alongside the drums. Mercifully, Agins breaks the track down at four minutes, giving the listener a chance to breathe before the return of the original keyboards. Unexpectedly, the track ends with a rather soft and symphonic ending.

On the Edge of a Dream constitutes only a crackly recording of an acoustic guitar solo. Dancing on the Waves starts with an innocuous theme, seemingly unable to distinguish itself from the previous tracks, but things change when a deep theme is played on the bass and accentuated by the drums. Piano jumps in to accompany, the first time this instrument has been heard on the album.

Somnium Chorus is a bit of a paradox, with pieces that feel very spontaneous despite the knowledge that much planning must have been made to make them the way they are by mixing the instruments together. The lo-fi homebrew feel is a refreshing alternative to the myriad of clean studio recordings we usually hear. The lack of any standout tracks might just make this a blip on anyone’s radar.

Released on the second anniversary of Somnium Chorus’s release, Desiderium begins with another short opener, Dance Macabre, beginning with a light flute theme that is soon accompanied by bass notes. A Sleepless Dream is more refined than the songs on the previous album, with a slow intro building into a series of alternating fast- and leisurely-paced sections. The unpredictability is mind-boggling but also oddly satisfying, since frenetic tight parts will be replaced by laid-back grooves. Towards the end of the song, we hear our first vocals, a spoken part modulated to sound like an alien voice.

A Haunting Chorus Harrows the Dawn is a melancholic acoustic guitar solo interlude. I Sing of Chaos and Eternal Night, however, is the closest we’ve come to a ‘traditional’ song so far. The first half has lyrics – taken from John Milton’s epic poem Paradise Lost – that sound monotonous as they are fed through the same ‘alien’ filter that we heard on A Sleepless Dream, this turns sharply into a thorny instrumental with an odd groove in 4/4 time over a repeated piano theme. Agins’s drums skills are showcased here.

Preparing us for our two back-to-back album epics is Telesthesia, a short piano break. Lily of the Damned starts out heavy, a chugging guitar riff played over an energetic drum pattern, all hi-hats and ride cymbals. It sounds more complicated than it needs to be, but maybe it’s better that way. Around five minutes into this long-piece, we have a vocal line: “The more things change, the more they stay the same”, which is incredibly reminiscent of a similar line in Gentle Giant’s Proclamation, both lyrically and melody-wise. The sound of Mellotron flutes haunts the second half of this song, bringing an eerily soothing section with it.

For the Dead (Travel Fast) is the most epic song in the collection, both with its stately 13-minute length and its highly decorous composition. Verses are interspersed with up-tempo instrumentals, all of it sounding very deliberate, unlike some of Avyakta’s previous tunes. A circus theme gives way to a super-fast set of blast beats on the bass drum that makes me question if Agins really played physical drums for this or merely programmed them. Disappointingly, the track ends on a rather innocuous theme that fades out. Definitely a whimper rather than a bang.

An Ardent Longing opens with a very enticing neo-prog synthesiser theme, backed by furious drumming and guitar riffs. This gives way to a more peaceful theme supported by a bouncing bassline and highly skillful tom-tom runs, leading into a now-predictably aggressive guitar heavy section. Warm piano notes played over a marching drum pattern bring this album to a close. With some of the strongest themes on the album, this might be the standout track.

While Agins’s creative mind certainly has a lot to offer – unpredictable tunes that excite, soothe and baffle, quite possibly all at once – one can’t help but wish he would temper his compositions with some sort of structure that might make them more memorable pieces that one couldn’t wait to return to. On the other hand, it might just be the sheer randomness of these songs that sets him apart from the crowd, and indeed, it would go against the very phrase that has defined this artist: “Avyakta”, ‘devoid of form’ – Agins’s USP. Is he using this title to cover for the fact that he doesn’t know how to write satisfyingly structured music or is he breaking the rules on purpose to bring us something invigorating? Satisfyingly far from mainstream prog, Avyakta provides intrepid listeners with something to scratch their head over whilst bobbing it to the alternating rhythms.

MUSICIANS
Jesse Agins – All Instruments and Vocals
~ With:
Kait Gilleran – Vocals (on For the Dead (Travel Fast))