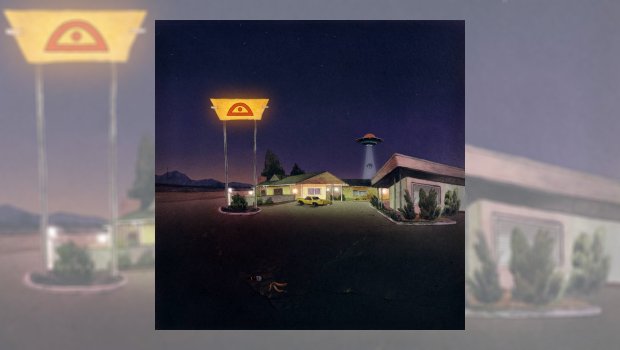 The word ‘ambivalent’ is often somewhat misused, and used to express indifference. When I first heard Detieti’s latest album, Serious IV, I was not indifferent. I was ambivalent. I had very strong, simultaneous and contradictory feelings whenever I listened to the album. My ambivalence came from my love of what the band once was, and seemed no longer to be. And yet, though I was disappointed, I was also enthralled. Serious IV is a wonderful album, and it’s probably more likely to gain the band a following than any of their previous releases – especially as it is certainly more accessible and, well, serious. But I loved Detieti for being the completely bonkers band they were. A band that never went anywhere expected, and wrong-footed listeners at every turn. While Serious IV is still avant enough to put off some listeners, it’s no longer so odd, strange, weird and crazy. It’s… serious. Well, as serious as an album soundtracking a non-existent film about an extra-terrestrial race of squid-like creatures experimenting on Earth’s donkeys can be, I guess.

But as bizarre as that concept might sound, you need only read the Bandcamp blurb for their previous album, Frogressive Punk, to see just how out-there a concept one would once have expected from the Russian outfit. Alien squids are rather mundane in comparison. And the soundtrack somewhat is, too. But – and this is the rather large caveat – the music of Serious IV is mundane only to those who know Detieti’s previous work. Taken by itself, Serious IV is a really awesome album, that I really love. I just can’t help but miss the far-out kookiness. Thus, ambivalence. I love what I hear and wouldn’t change a thing, and yet when I first heard it, at the same time longed for it to be different, and mourned what had changed. I’m guessing a lot of the changes are down to the loss of Ivan “Vanish” Khvorostukhin. While Frogressive Punk was the first Detieti album to feature new guitarist Alexander Kosarenko, the album was all written with Vanish, and Detieti founder (though he is only a guest musician on their albums, having left the band prior to any release), Roman Karandaev. Serious IV is the first Detieti album to not feature any contribution from Vanish or Roman.

But, if this is where Detieti is taking me, I’m not complaining. I may have been ambivalent, but I’ve truly enjoyed the trip they’ve taken me on here. The band have abducted me, and probed me, and I like it. And any ambivalence has left me. Opening track, Disorienteria may not be as disorienting as previous material, but it’s still not what I’d call normal (what is normal?). It may be less angular and jarring, more quiet and calm, but it’s still a thoroughly engaging mix of sounds and influences. Once upon a time, the band claimed to be a mix of funk, dub, metal, ska, punk and anything else they could throw in the pot, and gave early and eclectic Queen and the many projects of Mike Patton as their major influences. I would say that Zappa must certainly also be an influence, and surely some Can too. Detieti’s Bandcamp page admits that their earlier albums had an “overall atmosphere of a crazy circus” and that now the band “tends to be calmer, writing more thoughtful music.” But, while there is less unpredictability and surprise to their sound, Detieti still provide plenty of variation in the music and rhythms to keep listeners on their toes. That same mix is there, but it’s served in a more gentle fashion, rather than thrown across the room in the hope of starting a fight.

Unlike previous releases, Serious IV is an instrumental album, and as the vocals were often as crazed and crazy as the music, the lack of vocals alone gives this album a very different feel. But the near thirteen minutes of the opening number fly by, and need no vocals. In fact, though I always knew how adept the band were on their instruments, without vocals it is really overt. The interaction between them is wonderful. They can all go in different directions and come back together as one. Each musician knows exactly what the other is doing, and they play over, under, through and against each other to create a beautiful jigsaw-like tapestry. Viktor Tikhonov skitters all over the place on drums and percussion, and Mikhail Ivanov lays down so many fat and funky bass lines, and plays… toy piano! Ivanov and Tikhonov both add synths and samples to the album, and are augmented by Petr Bolotiv as the main synth and noise effect provider. No-longer-so-new member Alexander Kosarenko doesn’t just provide a strong and quirky presence on guitar, but also plays mbira, didgeridoo, percussion, and bass synth. And if this were not enough, three other musicians add their touches to some of the tracks.

What we hear on Serious IV is a fuller and more fluid sounding Detieti. The changes of rhythm and style are no longer so sudden and schizophrenic as they were on previous releases. They are still present, but in a far more easily digested manner, while still maintaining an avant edge. Though I would never say Detieti sound like Beardfish (the two bands are not even close), Serious IV reminds me a lot of my favourite Beardfish album, The Sane Day. There is a sense of controlled chaos (where previously, Detieti went for the chaos, and didn’t bother with the control), and the restraint works surprisingly well. There are times where I can hear where the Detieti of old would have taken a left turn, and they choose not to – and it just works. I guess these were the times of my greatest ambivalence, as half of me wanted to hear them go off on that tangent, while the other half was somewhat in awe that they have not. But, as I say, I am ambivalent no longer, and I can’t wait to hear where Detieti takes me next!