Sonata Arctica are well established in the classic tradition of Finnish power metal bands, but have so much more to offer than out-and-out metal thrash, and their latest album should endear them to a much broader audience, particularly of a progressive persuasion. They are known for a more melodic approach to metal and now Sonata Arctica have released Acoustic Adventures: Volume One, on 21st January, through Atomic Fire Records.

At the heart of every great band is great song-writing and Acoustic Adventures: Volume One allows this to shine through. Here are new arrangements of twelve of their classic tracks that capture the heart, spirit and essence of Sonata Arctica, devoid of the break-neck pace associated with metal, and with both feet very firmly in the progressive genre.

When Sonata Arctica hit the road in 2016 to premiere their acoustic set to a stunned audience, and again in 2019, the idea was born to immortalise these intimate and heartfelt arrangements from their catalogue on two acoustic albums, the second of which is set follow soon. 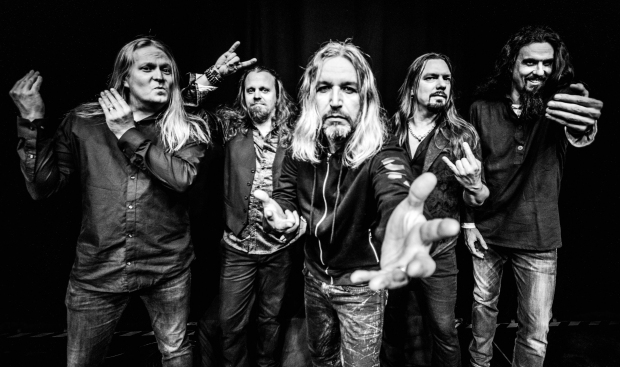 “The fans truly seemed to enjoy this side of the band quite much so there was clearly a demand to record these versions of our music,” says keyboard player Henrik ‘Henkka’ Klingenberg. “We originally planned to record these songs in Los Angeles at a friend’s studio but, since most of our touring seized, we decided to do the recordings a bit sooner.”

Acoustic Adventures: Volume One was recorded during summer 2020 and, even though the band’s material is so strong, some songs proved to be a little trickier than others. “Not all of the stuff we tried worked out which is why some songs were not recorded,” says Henkka. “Luckily we have quite a large collection to choose from so there’s really no shortage of material.”

With ten studio albums to their credit, across a twenty-year career, Sonata Arctica had over one hundred songs to choose from. And they have immersed themselves wholeheartedly in this project, not only replacing electric guitars with acoustic, they have created whole new arrangements. “Thus, a lot of the songs sound quite different from the original versions,” Henkka adds.

Building on the songs from the sets performed during the Acoustic Adventures tours, they added some personal favourites to the mix and recorded the whole collection ‘live’. The only studio album not to be represented here is their 1999 debut Ecliptica. From the opening The Rest of the Sun Belongs to Me (from Winterheart’s Guild, 2003) to the heart-breaking ballad Tonight I Dance Alone (Stones Grow Her Name, 2012), it becomes clear that Sonata Arctica have found solace and a home in these tender versions. A Little Less Understanding (from their latest studio outing Talviyö, 2019) deals with the difficulty of making the right choices with the upbringing of a new human being. Talviyö, in particular, seems to have created a division among Sonata Arctica fans, some of whom were quite vocal in their disappointment with the direction in which the band were moving. Perhaps the seeds of their Acoustic Adventures began to shoot with the last album? I truly hope it is something they will take forward as they have so much more to offer than your average metal band.

One song especially proved to be a challenge for Henkka. “Wolf & Raven (Silence, 2001) was quite the thing to play on acoustic piano,” he laughs, “but the whole session was a big challenge for everyone. On top of doing it all live, we chose not to use a click track or metronome, so you had to be really alert and make sure the songs stayed in tempo. I think For the Sake of Revenge (Unia, 2007) is still my favourite. It turned out really special and so different from the original. We also didn’t play the acoustic version live so nobody has heard it.” Yet, he means. Sonata Arctica will be touring in Europe in the autumn 2022, rescheduled from the spring, but no UK dates are planned.